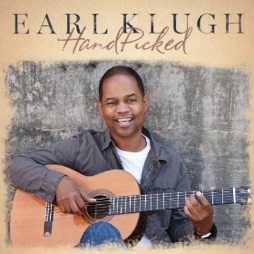 Earl's Website Earl's Artist Page on MainlyPiano
Album Links
Amazon (referral)iTunes
This site contains affiliate links to products. We may receive a commission for purchases made through these links.
HandPicked
Earl Klugh
2013 / Heads Up
56 minutes
Review by Michael Debbage
The 1980’s was loaded with classic Earl Klugh albums such as the likes of Wishful Thinking, Soda Fountain Shuffle and Life Stories. Klugh continued into the 90’s recording memorable material but since entering the new millennium his recording profile has somewhat diminished but certainly the quality of the recordings showed no parallel. Throughout his career Klugh’s original recordings have peacefully co-existed with his other projects of cover albums focusing on the work of other artists. HandPicked is one of those projects and while the results of been mixed in the past there is no doubting that Klugh’s unique twists here have resulted in HandPicked feeling somewhat handmade.

So what made this album any different to Klugh’s other cover albums? First, the album features duets with three other artists. First there is the delectable “Blue Moon” that features Bill Frisell as well as the ultra smooth vocals and guitar work of Vince Gill on “All I Have To Do Is Dream”. But clearly the best of the three duets can be found on the more progressive “Hotel California” where Klugh’s understated but precise guitar work is in complete unison and tandem with Jake Shimabukuro’s ukulele. Despite clocking in at over eight minutes the song still leaves you wanting more.

Between the above duets include some of Klugh’s interpretations on well celebrated songs such as “Cast Your Fate To The Wind”, “Alfie” and “If I Fell” to name a few. Klugh even includes two of his own compositions which are “Where The Wind Takes Me” closing out of with “This Time”. For those of you not familiar with the latter this was co-composed with vocalist Al Jarreau back in the eighties and was a huge hit for Jarreau. Here Klugh lets his guitar do all the talking and what a sweet voice it is with absolutely no embellishments. “This Time” is a beauty even this time around.

Earl Klugh’s recording debut was 37 years ago back in 1976 and during this impressive recording career, to date he has received 12 Grammy nominations as well as being awarded a Grammy for his collaborative project One On One with pianist Bob James. Needless to say Earl Klugh has become somewhat of a national treasure with his plaintive but inspiring nylon guitar work. Whether it is original material or covering other artists work the results are always impressive. That said HandPicked is without a doubt his most inspiring cover album to date.
September 30, 2013
This review has been tagged as:
Guitar musicMichael's Favorites: 2013
Earl's Website Earl's Artist Page on MainlyPiano
Album Links
Amazon (referral)iTunes
This site contains affiliate links to products. We may receive a commission for purchases made through these links.