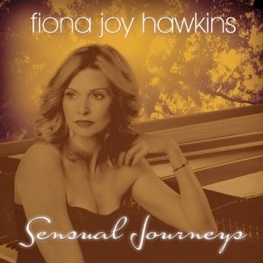 Fiona's Website Fiona's Artist Page on MainlyPiano
Album Links
Amazon (referral)iTunes
This site contains affiliate links to products. We may receive a commission for purchases made through these links.
Sensual Journeys
Fiona Joy Hawkins
2012 / Little Hartley Music
58 minutes
Review by Kathy Parsons
Sensual Journeys is a beautiful compilation/best-of album by Australian pianist/composer Fiona Joy Hawkins. The eleven tracks are representative of six of Hawkins’ previous releases including her award-winning Blue Dream (2008). I’ve been a big fan of Fiona’s music for quite a few years now, so a new album from her is always a treat! Although the tracks come from a variety of recordings, the album has a consistent feeling and sound throughout. It is interesting to note that several of these pieces have more than one title, so if the music sounds familiar but the title does not, that could be the reason. An impressive list of regular musicians from Will Ackerman’s Imaginary Road studio appear, including Charlie Bisharat on violin, Eugene Friesen on cello, Jeff Oster on flugelhorn, Jill Haley on English horn, T-Bone Wolk on bass, Noah Wilding’s vocals, and Will Ackerman on guitar and mandolin.

Sensual Journeys begins with “Contemplating,” a highlight from Blue Dream. Wordless vocals by Luka Bloom and Noah Wilding add passion and depth to the graceful, dreamy melody. “Joy” appeared as the title track on last year’s Christmas Joy and is a light-hearted, swirling happy dance. “Flight of the Snowbird” is arguably Hawkins’ signature piece and is also known as “Flight of the Albatross” and “Antarctic Wings.” This version, arranged by Philip Aaberg, also comes from Christmas Joy. Love it!!! “Gliding on Air” first appeared on the Christmas album as “Gliding on a Sleigh” - smooth and dreamy. Haunting, ethereal vocals make “The Midnight Interlude” and its segue into “Moving On” another highlight from Blue Dream. I’ve always loved Fiona’s Ice: Piano Slightly Chilled, and “White View” is one of the best tracks from that album - it’s great to hear it again! Actually, “White View” is very closely related to “View From My Studio,” which first appeared on Fiona’s 2005 debut Portrait of a Waterfall and is another of her signature pieces. This version is the concert piano solo recorded for Live at the Q.

Whether you’re a long-time fan like me or new to Fiona Joy Hawkins’ music, this is a great album! Will Ackerman says of Fiona “One of the brightest lights in the contemporary instrumental genre, Fiona Joy Hawkins is poised to move into stardom.” Discover for yourself what all the buzz is about! Sensual Journeys is available from LittleHartleyMusic.com, Amazon, and iTunes. Highly recommended!
July 9, 2012
Fiona's Website Fiona's Artist Page on MainlyPiano
Album Links
Amazon (referral)iTunes
This site contains affiliate links to products. We may receive a commission for purchases made through these links.
More reviews of Fiona Joy Hawkins albums 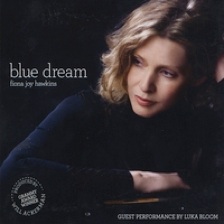