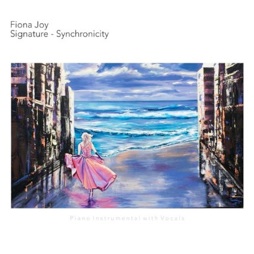 Fiona's Website Fiona's Artist Page on MainlyPiano
Album Links
Amazon (referral)iTunes
This site contains affiliate links to products. We may receive a commission for purchases made through these links.
Signature - Synchronicity
Fiona Joy Hawkins
2016 / Tiny Island Music
44 minutes
Review by Kathy Parsons
Signature - Synchronicity is the promised orchestrated version of Fiona Joy’s first solo piano album, Signature - Solo (2015). Produced by Will Ackerman, Tom Eaton, and James Englund, Synchronicity was recorded at Ackerman’s Imaginary Road Studio in Vermont. In addition to Fiona Joy’s piano, keyboard and vocals, Synchronicity features world-class musicians such as Ackerman, Jeff Oster, Eugene Friesen, Marc Shulman, Premik Russell Tubbs, Jeff Haynes, and Tony Levin. A classically-trained pianist from Australia, Fiona Joy has created an impressive collection of recordings beginning with her 2004 release, Portrait of a Waterfall (as Fiona Joy Hawkins). Several of her earlier albums were also recorded at Imaginary Road Studio and co-produced with Will Ackerman who refers to Fiona Joy as “one of the brightest lights in contemporary instrumental music.”

The Signature Series is an ambitious project that has evolved over a period of five years. Fiona Joy originally conceived the project as an expression of her inner life and how the deteriorating “signature” bone in her left hand was affecting her ability to share her music. It ultimately evolved into a series about the ideas we buy into and the modern fairytales we create for ourselves, as well as an exploration of emerging recording formats and how they are received. Both albums have been released in multiple formats. The song list is the same on both albums, except that on Synchronicity, “Once Upon Impossible” appears once and there are two versions of “Grace.”

Signature - Synchronicity begins with “Ceremony,” a lively, upbeat piece that features piano, vocals, percussion, electric guitar, electric bass, and keyboard pads. “Grace” is becoming one of Fiona Joy’s “signature” pieces. (A different arrangement was included on the 2014 Grammy Award-winning album, Winds of Samsara by Ricky Kej and Wouter Kellerman.) This version features piano, Fiona’s ethereal vocals, flugelhorn, cello, and NS bass. The addition of strings enhances the emotional power of the melancholy “Fair Not.” Overflowing with heartbreaking emotion “Once Upon Impossible” is just Fiona’s voice and her piano. “Calling Earth” first appeared as “Earthbound” on 600 Years in a Moment (2013). This version includes piano, vocals, cello, and NS bass. “Invisible Train” picks up the energy level considerably with piano, vocals, EWI, percussion and NS bass. The chill version of “Grace” introduces Fiona’s son, Nick, on beat box - an interesting addition to keyboard, vocals, percussion, electric guitar, electric bass, and flugelhorn. The elegant title track is slow, pensive and very heartfelt; tarogato and acoustic guitar add their magic to the mix. The gentle “Little Star” concludes the album simply and without a lot of embellishment.

It’s always fun to hear different arrangements of favorite music, so if you enjoyed Signature - Solo, you will definitely enjoy Signature - Synchronicity. I have to admit that I’m still partial to the Solo version, but that’s just my personal preference. The album is available from LittleHartleyMusic.com.au, Amazon, iTunes and CD Baby. Recommended!
April 19, 2016
Fiona's Website Fiona's Artist Page on MainlyPiano
Album Links
Amazon (referral)iTunes
This site contains affiliate links to products. We may receive a commission for purchases made through these links.
More reviews of Fiona Joy Hawkins albums 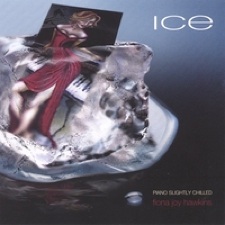