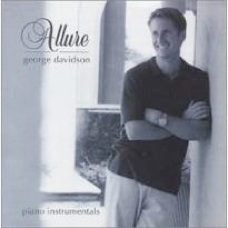 George's Website George's Artist Page on MainlyPiano
Album Links
Amazon (referral)
This site contains affiliate links to products. We may receive a commission for purchases made through these links.
Allure
George Davidson
2001 / George Davidson Productions
58 minutes
Review by Kathy Parsons
George Davidson’s eighth CD shows growth as an artist in his playing, arranging, and in composing the two original compositions that are included in the collection. Davidson’s piano is joined on several tracks by Ljova “Lev” Zhurbin on viola. (Zhurbin also appeared on “Twin Strings II”.) One of the things I really like about Davidson’s recordings is that even though he is doing mostly covers, he doesn’t let showmanship take over the arrangements as too many pianists do, overpowering the listener with ten glissandos a measure and arpeggiated chords by the ton. Davidson’s playing is superlative, and a word that keeps coming to mind is “classy”. Allure includes several pop standards, but not quite as many as in previous albums, which I like, as I prefer his original and less-familiar songs. The standards include the theme from “Love Story”, the “Feather Theme” from “Forrest Gump”, “Send in the Clowns”, “Can You Read My Mind” from “Superman”, and “St. Elmo’s Fire”. I teach these pieces all the time, so it’s nice to hear new versions of them. George also does an exceptional job with the rock classic “A Whiter Shade of Pale”, perhaps inspired by David Lanz’ great arrangement from “Cristofori’s Dream”. The less familiar songs really sing and several have a very strong classical influence. “Le Bonheur D’Aimer” is gorgeous - passionate and evocative. “Sleepy Shores” is a song I heard a couple of times maybe fifteen years ago and loved, and never knew what it was, so it was a real surprise to find it here! It is just as beautiful as I remembered. Sarah Brightman’s “So Many Things” is poignant and a little sad, underscored by the plaintive viola. “Les Roses De L’exil” is also exceptional. The two original pieces are beautiful, and I really hope Davidson will feature more of his original work. “Eileen’s Song” is elegant and soulful, full of grace and gentleness. Eileen is Davidson’s wife, and the song is overflowing with love as well. “Moments in Time” was co-composed with Zhurbin, and is a bit more lighthearted than some of the other tracks. All eighteen tracks are beautiful and fit together well as a collection. George Davidson is definitely an artist to watch, as he just keeps getting better!

Allure is available from www.georgedavidson.com as well as most online dealers.
January 1, 2001
George's Website George's Artist Page on MainlyPiano
Album Links
Amazon (referral)
This site contains affiliate links to products. We may receive a commission for purchases made through these links.
More reviews of George Davidson albums 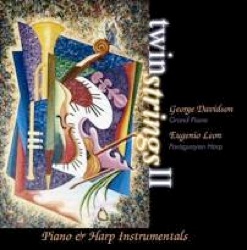 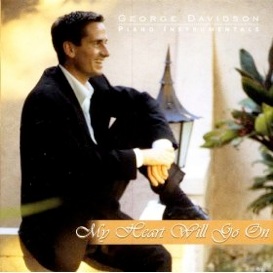 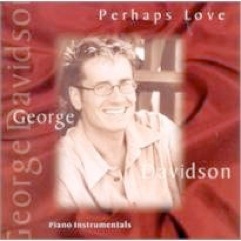