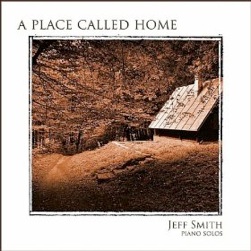 Jeff's Website Jeff's Artist Page on MainlyPiano
Album Links
Amazon (referral)iTunes
This site contains affiliate links to products. We may receive a commission for purchases made through these links.
A Place Called Home
Jeff Smith
2010 / Jeff Smith
36 minutes
Review by Kathy Parsons
A Place Called Home is pianist/composer Jeff Smith’s first solo piano album, and what a beauty! It’s easy to hear why it has been nominated for the “2010 Whisperings Solo Piano Radio Album of the Year” award. Amazingly, Smith began composing and playing the piano at the age of two and started performing publicly at the age of eight. He made his orchestral debut at twelve, performing the Grieg Piano Concerto, and toured Europe as the featured soloist in the Beethoven Chorale Fantasia at sixteen. Smith has a Masters degree and Doctoral studies from the Peabody Conservatory of Music in Maryland, and has composed music for television, radio, and film. Inspired by David Nevue and the Whisperings group, Smith recently decided to compose his first solo piano album. He says of the album, "My desire was to allow God to create through me a collection of pieces that would capture the longing of every heart for a place of peace and rest." While Smith’s classical roots are apparent, his music is very contemporary and accessible, and his playing chops are superb. His debut album is as impressive as it is heartwarming, and Smith brings a very welcome new voice to the solo piano genre.

The album begins with the title track, a gentle piece that conveys feelings of nostalgia and longing. “Winter Rain” is very lively and dynamic, illustrating the intensity of a sudden heavy rainfall and the way big raindrops seem to dance on any surface they land on. I really like “With Open Hands.” Quiet but deeply emotional, I love the subtle touches and beautiful expressiveness of this piece. “Spirit Dance” picks up the tempo a bit as it evolves into swirls and leaps of notes dancing all over the piano. As its title implies, “Simple Things” has a very uncomplicated melody that is sincere, warm, and meaningful. My favorite track is “Wonder.” Intensely passionate, it clearly demonstrates Smith’s powerful technique as well as the depth of emotion within his own soul - an amazing piece! “Daydreams” is very fluid, constantly changing from one thought or daydream to the next - speeding up, slowing down, and pausing here and there. Charming! The closing piece is the elegant and heartfelt “Searching For Peace” - another favorite. It begins slowly, establishing the theme, and then adds variations that become faster and more complex as the piece evolves. It’s an expressive tour de force, and a spectacular finish.

Jeff Smith is off to a fantastic start with A Place Called Home! It is available from Amazon, iTunes, and CD Baby. Recommended!
January 7, 2011
This review has been tagged as:
Debut Albums
Jeff's Website Jeff's Artist Page on MainlyPiano
Album Links
Amazon (referral)iTunes
This site contains affiliate links to products. We may receive a commission for purchases made through these links.
More reviews of Jeff Smith albums