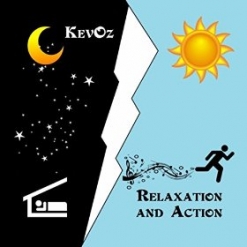 KevOz's Website KevOz's Artist Page on MainlyPiano
Album Links
Amazon (referral)iTunes
This site contains affiliate links to products. We may receive a commission for purchases made through these links.
Relaxation and Action
KevOz
2016 / Kevin R. Osborn
57 minutes
Review by Kathy Parsons
Relaxation and Action is the 14th album from keyboard wizard KevOz (Kevin Osborn) and his first album of all-original material in almost seven years. Not only is KevOz a one-man band with his music, but he also did the clever and dynamic cover artwork. The music on the fourteen tracks is a mix of electronica, new age, ambient, and a little jazz - what KevOz likes to call “innovative instrumental music that is beyond genres.” He started creating his own music on a variety of keyboards more than thirty years ago, going from toy keyboards to professional instruments as his collection, as well as his skills, expanded. Since then, KevOz has been profiled in Keyboard Magazine as their “Unsigned Artist of the Month,” has had his music placed in the iTunes Essentials: Yoga compilation, and over the past several holiday seasons Tokyo Disneyland has been featuring his Christmas music in Tomorrowland.

Many of the tracks on Relaxation and Action express a strong sense of playfulness and fun (as do their titles) with driving beats, dancing notes, and a variety of bells and whistles (sometimes literally!). I occasionally find myself thinking of Ray Lynch, Yanni, and even some of Fiona Joy’s earlier electronic music, mostly because of the joy of making music that comes across. A few tracks are much quieter, bordering on ambient, so the album covers a lot of musical territory and reflects a variety of styles and moods.

The album begins with “Victory At Hand,” a mid-tempo piece with a strong beat and a light-hearted spirit. “Waves of Nostalgia” sounds a bit like the synth recordings of the late ‘80s and early ‘90s with a bouncy beat and happy mood. “Bongos in Flight” is much more ambient and “spacey.” “Epic Space Cola” reminds me a bit of Ray Lynch’s “Celestial Soda Pop” - an all-time favorite of mine - and the title suggests a nod to that new age classic. I think it’s the playful attitude more than the sound of the music that resembles the earlier piece, but I really like it! “Just You and Me” has a simple piano melody over a steady beat and spare instrumentation - a sweet and lovely ballad. “Magic Wand” begins with the sound of a chilly wind and light but icy chimes - very dark, mysterious, and vast. As it progresses, flute-like sounds and a gentle beat gradually build to warm things up to a toe-tapping rhythm - also a favorite. “Panned-a-Monium” is mostly rhythms played on a variety of instruments. “Chiptune Delight” is pure electronic fun with a driving beat. The main percussion in “Ping Pong Blues” sounds like bouncing ping pong balls, so you know this piece isn’t overly serious either - although it is very well-crafted! “Yoga Worship on Mars” takes us back to deep space with a catchy beat and layers of instrumentation that include voices, gongs, plucked strings, bowed strings, and many others of a more electronic nature. “Purple Hearts” brings the album to a close with driving bass and drums behind a buoyant and triumphant electronic “ensemble” (for lack of a better word). Great stuff!

Relaxation and Action was worth the seven-year wait! It is available from Amazon, iTunes, and CD Baby. Very highly recommended to fans of electronica and music that really doesn’t fit any specific genre!

July 22, 2016
KevOz's Website KevOz's Artist Page on MainlyPiano
Album Links
Amazon (referral)iTunes
This site contains affiliate links to products. We may receive a commission for purchases made through these links.
More reviews of KevOz albums 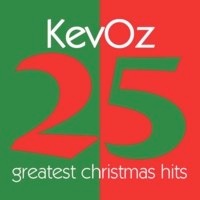 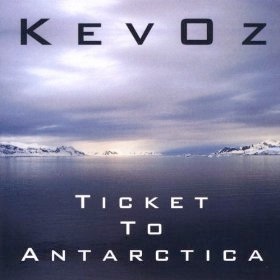