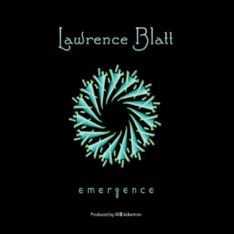 Lawrence's Website Lawrence's Artist Page on MainlyPiano
Album Links
Amazon (referral)iTunes
This site contains affiliate links to products. We may receive a commission for purchases made through these links.
Emergence
Lawrence Blatt
2014 / LMB Music
44 minutes
Review by Kathy Parsons
Emergence is guitarist Lawrence Blatt’s fourth album of original music. Produced by Will Ackerman, the album is comprised of three guitar solos and nine ensemble pieces that feature stellar musicians often found on Ackerman productions, including Charlie Bisharat (violin), Eugene Friesen (cello), Lila Sklar (violin and viola), and Jill Haley (English horn). All twelve pieces are exceptional even without knowing how the music was created, but a bit of knowledge about Blatt’s inspiration and composing process brings an even greater appreciation for the beauty of the music. The scientific concept of “emergence” states that diverse patterns can be derived from simple rules, often leading to unexpected results. Intrigued by the biological applications of “emergence,” Blatt utilized some of the basic principles to create the music for this album. He wrote the basic guitar part for each piece by strictly adhering to musical rules of chord progression and scale theory. No written parts were given to the other musicians. Instead, Blatt instructed them on the “allowable” movement based on musical theory and practice. Despite those restrictions, the music is fluid, accessible, and often very emotional. Blatt has combined science, math, and music on his previous recordings, so it is only mildly surprising to learn that he has a PhD in science. Classically-trained on violin for about ten years, Blatt started learning the guitar at the age of twelve and became part of the Indiana folk scene while continuing his classical studies. With such a varied background, it is no wonder that Blatt brings such a wealth of experience to his music, which is (happily) very difficult to classify. I love Blatt’s three earlier recordings, but think Emergence is his best album yet.

Emergence begins with “A Promise in the Woods,” a lovely guitar solo. The title track is a gorgeous duet with Charlie Bisharat that allows both artists to really shine by demonstrating their heartfelt artistry rather than flashy technique. “Gare Du Nord” is a stately chamber quartet with Blatt (guitar), Sklar (violin and viola), Friesen (cello), and Sam Bevan on double bass - elegant but very warm and accessible. The gently blissful “Walking Among Tulips” features Blatt, Friesen, Haley, and Richard “Gus” Sebring (French horn) - again very classical. “Passing Up Bridges” reveals Blatt’s folk roots and features him playing guitar, bass, accordion, and mandolin. Sklar joins him on violin and the late Jim Rothermel played a joyful and buoyant penny whistle. This beautiful piece would be perfect behind photos or a film about America’s heartland. “The Place Where Monarchs Go” is another stellar duet with Bisharat. This time, Blatt’s baritone guitar has a grounding influence while Bisharat’s violin sends the music floating into the clouds - love it! “Poloyne” is my favorite track. A duet with Sklar (violin), it begins as a dark violin solo with a Middle Eastern flavor. Blatt’s expressive guitar is more rhythmic while tinged with mystery, and the piece is sometimes heartbreakingly mournful. The graceful and evocative “Where the Pines Once Stood” is a duet for guitar and French horn. “Illuminations” is a spare and dreamy guitar solo. “Green Corn” closes the set with an unusual trio - baritone guitar, violin (Bisharat), and French horn - again evoking peaceful images of wide open spaces and breezes gently blowing through fields - a sweetly upbeat close to an outstanding album.

Lawrence Blatt has created another masterpiece with Emergence! It is available from Amazon, iTunes, and CD Baby. Very highly recommended!!
April 19, 2014
This review has been tagged as:
Guitar musicZMR Winner
Lawrence's Website Lawrence's Artist Page on MainlyPiano
Album Links
Amazon (referral)iTunes
This site contains affiliate links to products. We may receive a commission for purchases made through these links.
More reviews of Lawrence Blatt albums 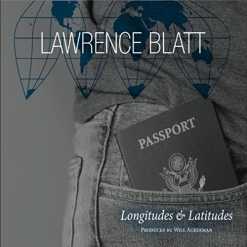