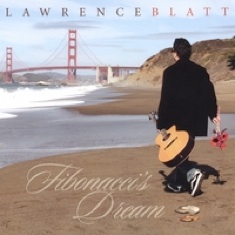 Lawrence's Website Lawrence's Artist Page on MainlyPiano
Album Links
Amazon (referral)iTunes
This site contains affiliate links to products. We may receive a commission for purchases made through these links.
Fibonacci’s Dream
Lawrence Blatt
2007 / Lawrence Blatt
37 minutes
Review by Kathy Parsons
The full title of Lawrence Blatt’s second release of original solo guitar pieces is Fibonacci’s Dream: Eclectic Modern Mathematical Compositions for the Acoustic Guitar. And just who was Fibonacci? He is considered to be the greatest mathematician of the middle ages and introduced Europeans to the Arabic numerals that we use today. He also discovered the “Golden Ratio” that appears everywhere in the natural world. Intrigued with his findings, Blatt set out to use the Fibonacci numbers in his compositions for this album, exploring the relationships of the numbers in music. We have all heard about how closely math is tied to music, but it’s usually more the logic and patterns that are found in music that are considered related to math, so Blatt’s experiment and and exploration were coming at this relationship from a little different angle. I think it’s very interesting that rather than sounding academic and sterile, Blatt’s mathematical musings are colorful, accessible, melodic, and a real pleasure to listen to (I also really liked his previous release, “Out of the Woodwork”). Blatt recorded several of these pieces in layers, playing a variety of guitars and accompanying instruments (mostly percussive). His handmade guitars have a beautiful sound, and he explains in the the liner notes which guitars were used and how he tuned them.

“Bern ‘The Bear’” begins the exploration. Composed while on a trip to Switzerland, the title refers to the capital’sbeing named for the bears that used to roam the area. Short in duration, it is a warm and inviting prelude. “Una Vida (One Life)” celebrates the influence of the Latin culture on California life. Lively and rhythmic, it’s a delight! “In a Heartbeat” is a sweet and gentle reminder of how quickly beautiful things can come and go. The title track is full of Fibonacci’s math and was the first piece written for the album. There is nothing mechanical-sounding about the piece, so just sit back and enjoy it! “I Remember When” is a soothing, graceful daydream. “Five Nights” was inspired by the 1981 Indiana University basketball team. Utilizing five melody lines that represent the five players on the team, it all comes together at the end - another really interesting concept piece that is also a lovely piece of music. “A Little More Sunshine” evolved from “Under the Sun” from the first album. True to the original melody and phrasing, this version feels a little more jazzy. “Song For Chava” was composed as a gift for Blatt’s daughter’s thirteenth birthday. Reminiscent of the family’s Eastern European heritage, it is a bit more exotic, but very smooth and warm. “La Selva (The Rainforest)” is a lively, rhythmic reminder of the importance of the world’s rain forests and how quickly they are disappearing. “Move Um Out” is a reflection on the turmoil in the world today and the senselessness of war. Darkly poignant, its quiet voice has a strong emotional impact - especially when chaos erupts at the end.

Fibonacci’s Dream is another outstanding CD from Lawrence Blatt. Fascinating musically as well as mathematically, I think you’ll really enjoy this if you like finger-picking guitar. Samples and sales are available at www.lawrenceblatt.com and cdbaby.com. Recommended!
December 19, 2007
This review has been tagged as:
Guitar music
Lawrence's Website Lawrence's Artist Page on MainlyPiano
Album Links
Amazon (referral)iTunes
This site contains affiliate links to products. We may receive a commission for purchases made through these links.
More reviews of Lawrence Blatt albums 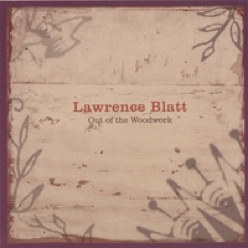