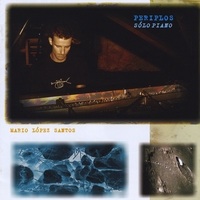 Mario's Website Mario's Artist Page on MainlyPiano
Album Links
Amazon (referral)iTunes
This site contains affiliate links to products. We may receive a commission for purchases made through these links.
Periplos
Mario Lopez Santos
2006 / Several Records S.L.
45 minutes
Review by Kathy Parsons
One of the joys of having a review website is that every once in a while an artist I probably would not have discovered otherwise finds me and blows me away. One such artist is Spanish composer/pianist Mario Lopez Santos. With a very strong background in classical music and a pianistic technique to die for, both of Santos’ CDs are mesmerizing as well as enchanting. Released in 2006, Periplos is Mario Lopez Santos’ debut recording, and what a stunning debut it is! A bit more classical in styling than his more recent 1973, the varied moods and incredible dynamics of this recording are truly awesome. There have been several times over the past few days when l was listening to this CD that I just had to pause and say, “Wow!” I’ve also added a new composer to my favorites list! Ear-candy this isn’t, but if you truly appreciate the piano, you, too, will be amazed at the colors and nuances Santos coaxes from the keys as he expresses his deepest thoughts and emotions.

The opening track is “Si el mar hablara,” a gorgeous piece that expresses the mix of love and fear most people have for the ocean and wonders what the sea would say if it could speak. With notes gently rolling like waves, it tells a lovely story. The title track (“Long Voyage”) tells of a lifelong search to find the melody that challenges him and reminds him of who he is or wants to be. Carefree optimism is set in waltz time, dancing with joy. “Luceros (Bright Stars)” is lively and sparkling with an infectious energy. I love “En mi casa (In my house),” a piece that overflows with contentment and peace yet maintains a vibrant tempo and deep passion. “Reflexion” has a wonderful Baroque styling reminiscent of JS Bach and a dark power that never stops moving - another favorite! “Mujer contra mujer (Woman against woman)” is a tribute to the group Mecano and a theme that was popular in the early ’90’s. Mysterious and darkly beautiful, it’s a very effective tribute! “Tarantella balcanica (Balkan tarantella)” is a joy. With fingers flying all over the piano keyboard, Santos shows us another side of his musicality with a piece that makes me smile every time I hear it! “El olvido no es victoria (Forgetting is not victory)” closes the album with a reflective, pensive piece that asks whether man is capable of forgetting or if he simply deceives himself by wanting to show others that he has forgotten. Very dark and almost mournful, the emotional impact of this piece is incredible. Wow!

I’ve been hearing some amazing music this year, but Periplos and 1973 are both guaranteed places on my Favorites list for 2009. If you like Philip Aaberg and Michael Dulin, I think you’ll agree that Mario Lopez Santos is a pianistic force to be reckoned with. Find his music at cdbaby.com, amazon.com (downloads), and iTunes as well as periplos.es. I give Periplos my highest recommendation!
July 3, 2009
This review has been tagged as:
Debut AlbumsKathy's Favorites: 2009
Mario's Website Mario's Artist Page on MainlyPiano
Album Links
Amazon (referral)iTunes
This site contains affiliate links to products. We may receive a commission for purchases made through these links.
More reviews of Mario Lopez Santos albums 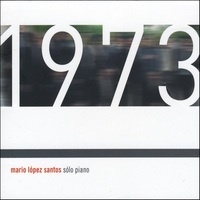