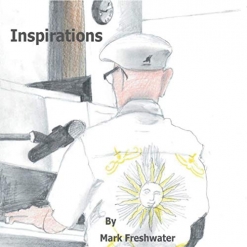 Mark's Website Mark's Artist Page on MainlyPiano
Album Links
Amazon (referral)iTunesSongbook Review
This site contains affiliate links to products. We may receive a commission for purchases made through these links.
Inspirations
Mark Freshwater
2019 / Mark Freshwater
49 minutes
Review by Kathy Parsons
Inspirations is the eighth album by pianist/composer/multi-instrumentalist Mark Freshwater. The fourteen tracks on the album are piano-driven, but most have additional keyboard orchestration ranging from strings to wordless vocalizations (no lyrics). The album is intended for contemplation, relaxation or background music, so while there is a lot of variety, it’s all pretty laid-back and smooth. The pieces were composed and arranged over a 2 1/2 year period and range from a couple of lullabies to a keyboard arrangement of the traditional English folk song, “Scarborough Fair.” I have reviewed seven of Freshwater’s eight albums and while his albums are always quite different from each other, it is always obvious that the music comes from his heart.

Inspirations begins with “Winter Solstice,” a piano and organ duet that celebrates the shortest day of the year. The piano part is very relaxed and repetitive, so the organ adds an interesting edge to the piece. “9ths Improvisation” is reflective and dreamy with a light touch of melancholy. It is mostly piano, but there are also passages of string accompaniment throughout. “Solar Eclipse” was inspired by the August 2017 event we all experienced to varying degrees. A bit livelier than the first two tracks, it suggests the beauty and majesty of the eclipse as well as the quickening pulse of being part of such an amazing event. “Meditations in A Minor” is a haunting piano solo (mostly) and one of my favorites. There are some strings and the sound of flowing water near the end, but this one is mostly piano. “Samara’s Song” overflows with grace and tenderness and is also mostly piano. Freshwater said he chose a guitar-sounding keyboard to give “Scarborough Fair” a more “folkish” sound. I thought it was a harpsichord since it has a crisp, plucked sound, but that doesn’t matter! The arrangement also includes some light hand percussion that harkens back to the music of The Renaissance times. I really like the easy, peaceful sound of “Where Dreams Are Born” (composed by Douglas Trowbridge). It includes piano, strings, guitar, bass, and various wind instruments (mostly flute). “Amnesiac” is the darkest and most intense piece on the album. This one is also mostly piano, with string washes and a light flute accompaniment. Soulful emotion pours out of every note - powerful stuff without a lot of flash. “Christmastime” celebrates many people’s favorite holiday with warmth and thoughtful reflection. “Latin Bolero” is another favorite. Vibrant and rhythmic yet darkly mysterious, I keep going back to this one! I really like “Melancholy Mood,” too, with its smooth jazz rhythm behind the piano. There is additional light orchestration (mostly strings) but the piano stays front and center. The album ends with “Voices in the Sky,” a dramatic yet ethereal piece with choral voices, strings, piano, bass guitar and other instrumentation - a great piece that could close a dramatic film as well as a really good album!

I think Inspirations is Mark Freshwater’s strongest album to date! It is available from Amazon, iTunes and CD Baby as well as various streaming sites.

July 16, 2019
This review has been tagged as:
Kathy's Picks
Mark's Website Mark's Artist Page on MainlyPiano
Album Links
Amazon (referral)iTunesSongbook Review
This site contains affiliate links to products. We may receive a commission for purchases made through these links.
More reviews of Mark Freshwater albums