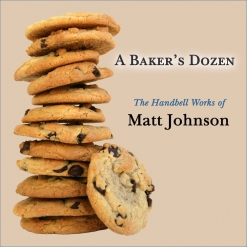 Matt's Website Matt's Artist Page on MainlyPiano
Album Links
Amazon (referral)Apple/iTunesSpotifySheet Music Plus
This site contains affiliate links to products. We may receive a commission for purchases made through these links.
A Baker's Dozen: The Handbell Works of Matt Johnson
Matt Johnson
2021 / Dolce & Nuit Productions
36 minutes
Review by Kathy Parsons
In my many years of writing reviews, I'm almost positive that this is my first review of a handbell album! Not surprisingly, the artist/composer/arranger is Matt Johnson, a very talented man of many musical hats. Titled A Baker's Dozen: The Handbell Works of Matt Johnson, the album contains thirteen tracks that include original works, traditional hymns and Christmas carols arranged for handbells, and a few surprises. It's a diverse and eclectic collection of music that features music for just handbells and as well as handbells with piano and/or other instrumental accompaniment. Sheet music is also available to download for all thirteen pieces (together or separately). As always, Matt offers both his recordings and his sheet music as free downloads from his website (with donations always accepted!). The recordings and sheet music are also available to buy from other online outlets.

Matt Johnson started playing handbells at the age of 12 in his church's youth handbell choir and continued with them throughout high school and college. Piano was his primary instrument, but as the Director of Music for a variety of churches, Matt has led many handbell choirs and often composed and arranged music for the groups he directed. Each track on the album has been released as a "single" previously, but they are now together on one album.

The album begins with a playful arrangement of "Chopstix" for piano and handbells. There are several light-hearted variations on the theme, making this a very happy first track! "Handbell Processional" is an original composition suitable for a variety of occasions. Created for a five-octave handbell choir, it is one of the more complex pieces on the album. "New Life" is also an original piece, this time for a three-octave handbell choir and optional cello. Also playable as a piano solo, the piece celebrates the joyous birth of a child. "Brells" is for brass ensemble, 3-octave handbells and an optional rhythm section. Bright, lively and bursting with energy, this unusual combination of instruments would be fun to see live! "Every Time I Feel the Spirit" is based on a traditional spiritual and has a "slow swing groove" with a very catchy blues feeling. "World Communion Handbells," one of the easier pieces in the collection, is based on a traditional hymn and is arranged for handbells with piano accompaniment. "We Gather Together" and "Come, Ye Thankful People, Come" are both arrangements of traditional hymns of Thanksgiving and both are arranged for handbells only. "Christmas Carol Medley" combines "Away in a Manger," "O Little Town of Bethlehem," "It Came Upon the Midnight Clear," "The First Noel" and "O Christmas Tree" into a lovely piece for just handbells. There is also an arrangement of "The First Noel" for piano and handbells that is more contemporary. The recording includes strings and other orchestration, and the sheet music is for handbells and piano only and is adaptable for other instruments. "Night in a Manger" is a sweet medley of "Silent Night" and "Away in a Manger" for bells only. Next is an arrangement of "Silent Night" for handbells and piano that can also be played as a piano solo. Gently flowing and very beautiful, it would be a lovely addition to any Christmas program! "Surprise Postlude" is a beginning level piece designed to be played as a surprise with players spaced throughout a congregation or audience. It's a short piece and would be a special treat to include in any church service or secular event.

A Baker's Dozen: The Handbell Works of Matt Johnson is a very impressive album and would add something different to your music collection! As I mentioned above, the recording (singles and the album) are available for free, as is the sheet music, from www.MattJohnsonMusic.com. The recording is available to buy or stream from Amazon, Apple Music/iTunes, and from Spotify and other streaming sites. The sheet music is available to buy as single songs or a downloadable book from SheetMusicPlus.com.
June 23, 2021
Matt's Website Matt's Artist Page on MainlyPiano
Album Links
Amazon (referral)Apple/iTunesSpotifySheet Music Plus
This site contains affiliate links to products. We may receive a commission for purchases made through these links.
More reviews of Matt Johnson albums 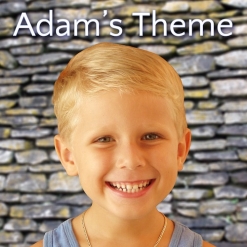 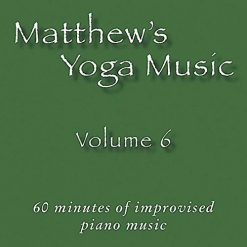 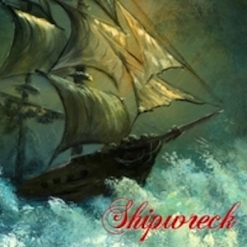