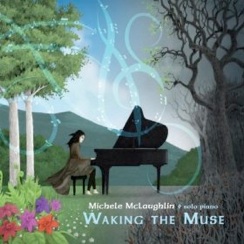 Michele's Website Michele's Artist Page on MainlyPiano
Album Links
Amazon (referral)iTunesSongbook Review
This site contains affiliate links to products. We may receive a commission for purchases made through these links.
Waking the Muse
Michele McLaughlin
2013 / Michele McLaughlin
46 minutes
Review by Kathy Parsons
I had serious doubts that Michele McLaughlin could ever top her 2010 release Out of the Darkness, but she has outdone herself with Waking the Muse! A fabulous new piano and extensive touring seem to have inspired and brought out the best in McLaughlin’s muse, dormant as it was for awhile. Usually an exceptionally prolific composer, I’m sure it was agonizing when the music just wouldn’t come, but once the floodgates opened, out came McLaughlin’s best collection of original piano solos yet. The thirteen pieces are a rich emotional mixture of joyful light and deepest darkness with the scale tipping a bit toward the dark, turbulent side. Strength and self-confidence flow from this music, even at its most despairing. Being familiar with McLaughlin’s recordings from the beginning and witnessing her artistic growth over the past eight years has been nothing short of awesome! (Her new 6’11” Fazioli sounds fantastic, too! Ooooh, that bass!!!)

There isn’t a weak track on Waking the Muse, but I’ll cover some of the highlights. It begins with the title track, a lively piece that expresses a mix of emotions ranging from almost mournful and desperate to anxious and excited with anticipation. “Radiance” is vibrant and alive with happy fingers dancing all over the piano keys. “Spiritual Awakening” was inspired by a serene morning cruise in Alaska and feeling connected to the universe. Sometimes flowing smoothly and sometimes more rhythmic, it’s a complex and powerful piece. “Humbled” seems to be a self exploration as well as a musical one - a beauty! “Misty Fjords” is the most carefree and joyful of the pieces on the CD. Inspired by an exhilarating seaplane ride over the Alaskan mountains in Ketchikan, it swirls and leaps with excitement. “Gratitude” is a graceful and heartfelt expression of thanks. “Until We Meet Again” was composed in honor of an uncle who passed away last year. Warm and loving, it also conveys deep sadness. “The Little Red Bird” is a Celtic-tinged improvisation created while a little red bird jumped from branch to branch in a tree outside her window as she played. “Torn” is a deeply poignant heartbreaker overflowing with tears and powerful emotions. “Unrequited Love” is too sad for words, but McLaughlin pours her heart out in one of her most affecting pieces yet, allowing us to share her painful emotions. “Dangerous Obsession” is extraordinary. Very dark and dramatic, the ominous deep bass goes right to the soul. Fury, passion, and frustration cry out from the heart of the piano as well as the pianist, reminding me once again that life’s worst experiences often culminate in an artist’s best work. That makes me sad, but this music is incredible!

Waking the Muse is certain to be on my list of Favorites for the year. It is available from michelemclaughlin.com, Amazon, iTunes, and CD Baby. I give it my very highest recommendation. (A companion songbook is on its way!)
May 22, 2013
This review has been tagged as:
Kathy's Favorites: 2013Whisperings Album of the Year
Michele's Website Michele's Artist Page on MainlyPiano
Album Links
Amazon (referral)iTunesSongbook Review
This site contains affiliate links to products. We may receive a commission for purchases made through these links.
More reviews of Michele McLaughlin albums 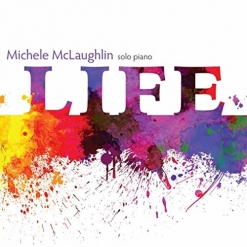 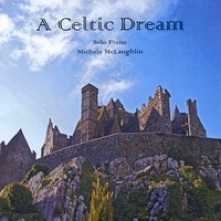