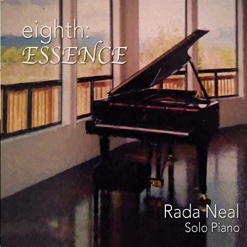 Rada's Website Rada's Artist Page on MainlyPiano
Album Links
Amazon (referral)SpotifyiTunes/Apple
This site contains affiliate links to products. We may receive a commission for purchases made through these links.
Eighth: Essence
Rada Neal
2020 / Rada Neal
55 minutes
Review by Kathy Parsons
I reviewed pianist/composer Rada Neal’s second and third albums back in 2006 and loved her music but not the piano sound she was getting on her recordings at the time. She recently released her eighth album, Eighth: Essence, and I’m delighted to say that the piano she recorded on this time is perfect for her lyrical and passionate music! And what a wonderful album it is! The thirteen original piano solos express a variety of moods and emotions in a style that is strongly influenced by Rada’s classical training but is still accessible to anyone who enjoys a beautiful melody and an elegant, expressive playing style.

The daughter of Yugoslavian refugees, Rada Neal was was born in a refugee camp in Germany during World War II. Shortly after the war, her family moved to the state of Indiana. When Rada was 7, her neighbors were getting ready to move and didn’t want to take their piano with them, so they gave it to Rada’s family. Rada fell in love with the instrument as soon as she touched it, a passion that continues to be a big part of her life. Piano lessons started right away, continuing through graduation from The School of Music at Indiana University, and the rest, as they say, is history.

Eighth: Essence begins with “Autumn Beauty,” a piece that beautifully expresses the mixed feelings of the wonder of fall colors and the anticipation of the coming winter. Mostly serene and optimistic, the slightly bittersweet flavor makes the piece all the more intriguing. “On a Summer Day” is relaxed and carefree, enjoying the lazy feelings that come with a slower pace and time to let go of pressure and obligations. “Into the Darkness” is a favorite with its ever-changing tempo and darker tonal colors. Rada has a real gift for composing minor-key waltzes and this one is no exception. I hope there is sheet music for this piece! “Shades of Time” conveys feelings of nostalgia and perhaps a touch of regret. The melancholy “Loose Ends” feels like it could have been composed late at night while working things out at the piano. “Runaway” is much livelier, dancing up and down the piano keyboard, occasionally slowing and pausing - possibly for a quick look around. “Mila Moja” translates as “My Dear,” and was released as a single earlier this year. A sweet and gentle love song, perhaps for a child, feelings of love and tenderness flow from every note. “Letting Go” is heartache set to music, expressing a range of emotions from sadness to anger to acceptance - beautiful! “Into Thin Air” comes from the depths of loss and trying to move forward. “Soulful River” closes this exceptional album with an uplifting message of hope and reassurance.

Eighth: Essence is a great way to get reacquainted with Rada Neal and her music! The album is available from Amazon, iTunes/Apple Music and streaming sites such as Spotify.

September 24, 2020
Rada's Website Rada's Artist Page on MainlyPiano
Album Links
Amazon (referral)SpotifyiTunes/Apple
This site contains affiliate links to products. We may receive a commission for purchases made through these links.
More reviews of Rada Neal albums 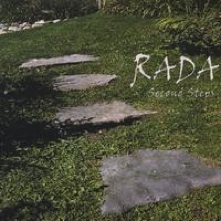 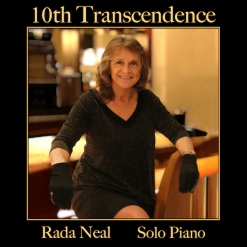 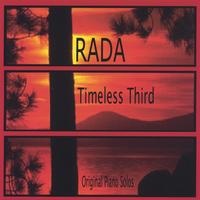