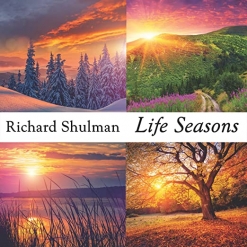 Richard's Website Richard's Artist Page on MainlyPiano
Album Links
Amazon (referral)iTunesSpotify
This site contains affiliate links to products. We may receive a commission for purchases made through these links.
Life Seasons
Richard Shulman
2020 / RichHeart Music
63 minutes
Review by Kathy Parsons
Life Seasons is the twenty-eighth album by Richard Shulman, a composer/keyboardist/pianist who creates music intended to be a positive influence for himself, audiences and society. Trained in the classical and jazz fields, Shulman has developed a heartfelt language in these genres while focusing a large part of his output on music for meditation, healing and inspiration. His extensive body of work includes music for solo piano, small jazz groups, chamber ensembles, choir, and symphony orchestra. Shulman started releasing albums in the late 1990’s, and I reviewed Camelot Reawakened (2002) as well as New Beginnings (2003), an album of piano and cello duets with Adriana Contino that I enjoyed very much.

The thirteen tracks on Life Seasons are a mix of vocal and instrumental pieces that tell stories about each of the annual seasons, often metaphors of the seasons of life. They also express the depth of love possible from sharing life over many years. All of the music was composed by Shulman, and the lyrics were penned by Brenda Lee Morrison, Paula Jeanine Bennett, Elinor Wylie and Ron Young. The Richard Shulman Trio consists of Shulman on piano, Zack Page on bass and Rick Dilling on drums. Vocals are provided by Wendy Jones, Paula Hanke, Sherman Hoover and Bob Bencze. Cellist Ron Clearfield appears on two tracks (always a treat!).

Life Seasons begins with the title track, a tender anniversary song that features vocals by Paula Hanke and cello by Ron Clearfield as well as the Trio. Brenda Lee Morrison wrote the poetic lyrics for this “mature” love song celebrating a longterm loving relationship. “Summer Solstice” is a wonderful jazz instrumental for the Trio that reflects the easy-going, languid mood of hot summer days. “Summer Night” picks up the tempo for a fun jazz samba with a party spirit (also for the Trio). “Pre-Autumn” (Trio) slows back down to bid farewell to summer - very relaxed and dreamy, and a favorite. “Sweet Autumn” (Trio) expresses the vibrance of the colors and crisp winds of fall. “Spinning into Winter,” a piece about transitions, includes vocals and flute by Wendy Jones, cello by Clearfield, and back-up by the Trio. “Winter Solstice,” the only piano solo on the album, is my favorite track. Expressive and introspective, it marks the darkest time of year and the time of inner light - I really love this one! “Winter Solstice Dream: Keepers of the Light” is an almost 10-minute spoken-word piece written by Ron Young as he awoke from a dream. Wendy Jones speaks the words as Shulman backs her on the piano. “Hope For Spring” (Trio) looks forward with hope and optimism. “Early Spring” (Trio) is a lively but relaxed instrumental ode to new life - also a favorite. The album closes with the spritely “The Fairy of Mystery Blue: Springtime Blessings” which features the vocal quartet and Shulman on piano.

There is great deal of variety in the music of Life Seasons - something for just about everyone! The album is available from www.RichHeartMusic.com, Amazon, iTunes, Spotify, and several other streaming sites.
July 8, 2020
This review has been tagged as:
JazzKathy's Picks
Richard's Website Richard's Artist Page on MainlyPiano
Album Links
Amazon (referral)iTunesSpotify
This site contains affiliate links to products. We may receive a commission for purchases made through these links.
More reviews of Richard Shulman albums 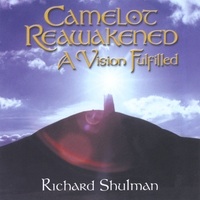 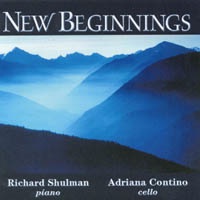