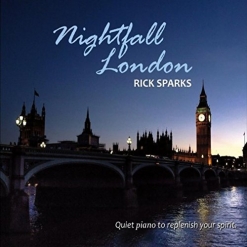 Rick's Website Rick's Artist Page on MainlyPiano
Album Links
Amazon (referral)iTunes
This site contains affiliate links to products. We may receive a commission for purchases made through these links.
Nightfall London
Rick Sparks
2017 / Rick Sparks
47 minutes
Review by Kathy Parsons
Nightfall London is the fourth recording from pianist/ composer/ keyboardist/ arranger/ producer/ DJ/ professor Rick Sparks. Sparks has had a few original pieces on his previous albums, but on this one, he composed nine of the ten tracks. Preferring a “less is more” approach, Sparks calls his music “Quiet piano to replenish your spirit.” The piano is featured on most of the tracks, and most are orchestrated with synth strings, flutes and other keyboard instrumentation. A longtime fan of all things British, Sparks was inspired by the beautiful photo that became the album cover showing London at dusk with Big Ben standing regally yet gracefully near the Thames. Sparks explains: “The music of Nightfall London was inspired by the strings of the London Philharmonic, the ethereal voices of an English choir and the somber beauty of twilight over Big Ben. Even more specifically, the enduring legacy of Sir George Martin was a constant inspiration to me in my arrangements, especially the string parts. His classical training and stellar musicianship were evident in all he did during his life as a producer and arranger. I admire him tremendously.”

Nightfall London begins with “Across the River,” a gentle piece that could be about the Thames, but could also be a metaphor for the “crossing” that occurs at the end of our lives. It opens with a full string intro before becoming a piano solo that is occasionally accompanied by ethereal choral voices (no lyrics) and/ or strings - a lovely start! The title track also begins with a string prelude, but instead of piano, the primary instrument in this piece is a bell-like keyboard voice that is haunting, but very peaceful. Choral voices again enhance the beauty of the music and give it an even more spiritual feeling. “Little Angel” was inspired by the headstone on an infant’s grave in an old mountain cemetery in Tennessee. Sad, but also expressing hope and acceptance, it’s a very poignant and touching piece. “First Love” expresses the wonder and magic of that very special time in our lives when we first really connect with someone. Piano, flute and strings convey tenderness and the sweet emotions of that experience. “In the Bleak Midwinter” is the only cover song this time, and this arrangement is for piano, choir and strings. “Hearts As One” is a love song, pure and simple. “Evening Prayer” closes the album with “an evening prayer of peace and gratitude to the Almighty for blessing my life with the priceless gift of music and the love of friends and family.” Amen.

Nightfall London is a great way to unwind with piano-based music that overflows with hope, faith, and peace. It is available from Amazon, iTunes, and CD Baby. Recommended!

July 7, 2017
Rick's Website Rick's Artist Page on MainlyPiano
Album Links
Amazon (referral)iTunes
This site contains affiliate links to products. We may receive a commission for purchases made through these links.
More reviews of Rick Sparks albums 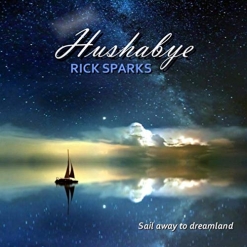 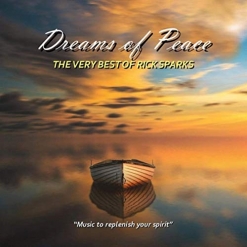 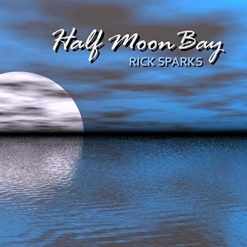