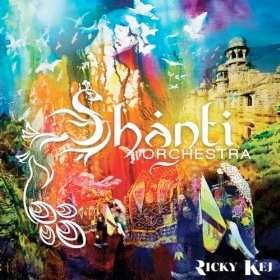 Ricky's Website Ricky's Artist Page on MainlyPiano
Album Links
Amazon (referral)iTunes
This site contains affiliate links to products. We may receive a commission for purchases made through these links.
Shanti Orchestra
Ricky Kej
2013 / Raveolution Studios
59 minutes
Review by Kathy Parsons
Shanti Orchestra is the first independent release from Ricky Kej. Born in the US and raised and educated in India, Kej’s original music is an impressive blending of a multitude of musical traditions, created to promote world peace and understanding. The title, “Shanti,” translates as “peace” and “equilibrium,” a theme that emerged as Kej realized that every groove, note and sound came together as if meant to be. More than twenty musicians from around the world contributed to this album, which is hailed as a timely update for fans of Buddha Bar and Enigma.

Ricky Kej is well-known for his advertising and film music as well as producing and appearing on dozens of albums. An early promotional copy Shanti Orchestra led to an invitation for Kej to become an ambassador for the US-based non-profit Project Peace on Earth. He is also an activist for Music Education and Animal Rights. It is an interesting aside that Kej completed the schooling and requirements to become a Doctor of Dentistry to satisfy his parents’ wishes, but has never spent a single day as a dentist, choosing instead to pursue his own dreams of creating and recording music. Lucky us!

Shanti Orchestra begins with “Shanti, Part 1,” a prelude of sorts that establishes a peaceful mood with the sounds of saarangi, santur, synth, and bamboo flute. “Forever” features sitar master Paul Livingstone as well as flutes, soothing vocals and atmospheric sounds. Very calming and peaceful! “Blue” is one of my favorites. Flutes, strings, sitar and gentle, swaying rhythms create a downtempo work of art that is both visual and poignant. “Pieces of Heaven” is the centerpiece of the album with a shorter reprise of the song at the end. A wide range of cultural sounds blend as one as Alexis D’Souza’s voice mesmerizes with her heartfelt message of love - simply a great piece of music! Infectious rhythms propel “Black and White,” another cross-cultural piece that defies categorization. Didjeridoo, flutes, hand drums, and diruba meet electronic instrumentation in a world fusion of music. “Mellow” begins with a simple piano melody that becomes enriched with strings and flute as it evolves, eventually including a 40-voice choir that embodies the voice of Mother Earth. The haunting “Intervention” is another favorite. Lovely voices sing in an invented monosyllabic language with an expansive electronic background, occasional flute, and strong but gentle percussion - gorgeous! The darkly mysterious “Thou” features the voice of Junior Bay. Lyrics sung in Latin have a chant quality superimposed over Middle Eastern percussion, harp, and flute. Keyboard lines add a Western flavor to an exotic and eclectic mix that works very effectively.

Shanti Orchestra presents a very “different” listening experience that is both eclectic and accessible. Ricky Kej leaves a lasting impression with his music and message of world peace. The album is available from rickykej.com, Amazon, and iTunes. Recommended!
October 6, 2013
Ricky's Website Ricky's Artist Page on MainlyPiano
Album Links
Amazon (referral)iTunes
This site contains affiliate links to products. We may receive a commission for purchases made through these links.
More reviews of Ricky Kej albums 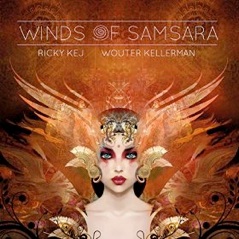