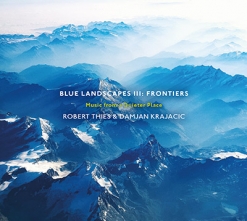 Robert's Website Robert's Artist Page on MainlyPiano Damjan's Website Damjan's Artist Page on MainlyPiano
Album Links
AmazoniTunes
This site contains affiliate links to products. We may receive a commission for purchases made through these links.
Blue Landscapes III: Frontiers
Robert Thies and Damjan Krajacic
2020 / Real Music
74 minutes
Review by Kathy Parsons
Blue Landscapes III: Frontiers is the third installment in a remarkable series of piano and flute albums by Robert Thies and Damjan Krajacic. Subtitled “Music from a Quieter Place,” the mostly improvised music is intended to “quiet the mind and nurture the soul” and was “inspired by and grounded in love for Earth’s beauty and all of her natural wonders.” All fifteen tracks were performed with piano and flutes (a “regular” C flute and a bass flute) only. Some of the different (plucked, muted, looped, etc.) sounds were created with techniques that add an expressive variety to the beautiful sounds we expect from these instruments. All but two of the tracks on this album were improvised over a period of five days (two were previously composed - “Le Musicien” and “Goodbye”). What is especially remarkable is the way the music evolves so effortlessly with two musicians of such different backgrounds. That musical and emotional connection creates a unique kind of energy that peacefully flows throughout the album and connects directly with the listener.

Both artists are world-renowned musicians. Robert Thies is the second pianist (after Van Cliburn) to ever win a major Russian piano competition (The Prokofiev) and has performed in concert as a soloist and with orchestras all over the world. He also regularly records soundtracks for film and television. Damjan Krajacic is a Croatian-born jazz flutist who specializes in Afro-Latin music as well as many other forms of jazz. The artists became friends in 2006 and started collaborating shortly thereafter. The first Blue Landscapes album was released in 2012 and Blue Landscapes II: Discoveries in 2016.

All fifteen pieces on Blue Landscapes III are beautiful and distinctive in their own way, but I’ll mention a few favorites. The album opens with “Drifting,” a piece that feels like a puffy white cloud floating through the sky, gently changing shape as it moves. The piano provides a slow, hypnotic rhythmic pattern as the bass flute weaves its magic. The piano takes the lead in much of “Forest Path,” painting images of the tranquility of nature, perhaps after a gentle rain. A looped pattern with the piano strings slightly muted creates a simple, plucked backdrop while Thies improvises with the piano strings unmuted. Krajacic’s bass flute mesmerizes in the first and last sections of the piece. I love this one! “The Abandoned Monastery” is haunting and incredibly atmospheric. Krajacic plays a four-voice chord progression on his bass flute as Thies adds tonal colors on piano - breathtaking! “Le Musicien” suggests touches of Erik Satie - very leisurely and simple. The title track is truly one of exploration and trying new things. A quick rhythmic pattern is looped on the piano, the bass strings sometimes sound as though they are being plucked, and Krajacic provides a breathy rhythm on the flute. As its title suggests, “Infinity” feels limitless and vast. A looped piano pattern repeats throughout as Krajacic creates some amazing sounds with his flute, some of which are otherworldly. “Waves on a Moonlit Sea” is my favorite piece on the album. My interpretation is that the piano is the calm, shimmering ocean, moving gracefully in the moonlight while the bass flute is the darkness itself - gorgeous! “The Valley of Echoes” is very dark and mysterious with the flutes layered over a looped piano rhythm and occasional punctuation from the deep bass strings. What an amazing album this is!

Extraordinary in its artistry, Blue Landscapes III: Frontiers is available from Amazon, iTunes and RealMusic.com as well as many streaming sites. Don’t miss it!
January 18, 2020
This review has been tagged as:
Kathy's Picks
Robert's Website Robert's Artist Page on MainlyPiano Damjan's Website Damjan's Artist Page on MainlyPiano
Album Links
AmazoniTunes
This site contains affiliate links to products. We may receive a commission for purchases made through these links.
More reviews of Robert Thies albums 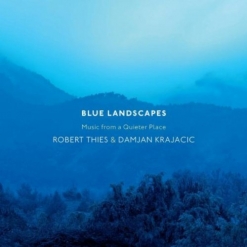 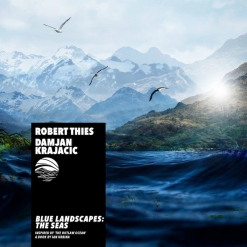 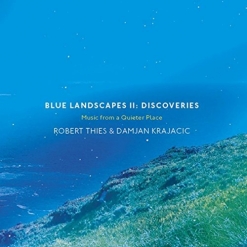