Shambhu's Website Shambhu's Artist Page on MainlyPiano
Album Links
Amazon (referral)iTunes
This site contains affiliate links to products. We may receive a commission for purchases made through these links.
Soothe
Shambhu
2017 / Acoustic Shine
42 minutes
Review by Michael Debbage
Shambhu’s created a very impressive 2010 debut entitled Sacred Love and followed it up with the equally strong follow up effort Dreaming Of Now that not only avoided the dreaded sophomore jinx but put to rest any doubt that the debut was just a fleeting musical moment. The biggest question that begs an answer is whether Soothe can continue the streak that Shambhu has set for himself? And the answer to that question is yes and no depending on your vantage point of view.

So let’s get the negativity upfront and out of the way as clearly there is no intent on this artist sitting on his laurels and repeating himself. Unlike his past two achievements where his creations exuded positivity this is not necessarily repeated. As a result Soothe is a mellower and less optimistic situation. For those of you expecting the more upbeat Shambhu might be in for a disappointment. As a result there are no stellar tracks and the album is not an immediate affair of the heart.

On the flipside Shambhu has clearly decided to live out his album title designation and present his listeners with a mellower reflective piece that may not grab your attention immediately but on repeated listens will slowly seize your heartstrings. Along with a magical cast of musical partners some of which have previously revisited, with the add on of Shambhu behind the production board along with Todd Boston the performance and sound is as always impeccable.

While Soothe may not be as immediate as Shambhu’s prior releases this unique guitarist is still capable of merging the elements of World, Smooth Jazz, New Age and Meditative qualities effortless but presents a more placid yet nevertheless just as an appealing recording. Avoiding what could have been paint by the numbers formula approach, Soothe while taking some chances does not discredit the growing impressive portfolio of this unique artist.

September 7, 2017
This review has been tagged as:
Guitar musicMichael's Picks
Shambhu's Website Shambhu's Artist Page on MainlyPiano
Album Links
Amazon (referral)iTunes
This site contains affiliate links to products. We may receive a commission for purchases made through these links.
More reviews of Shambhu albums 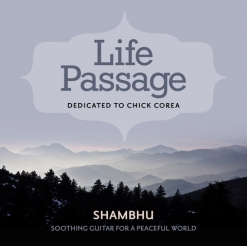