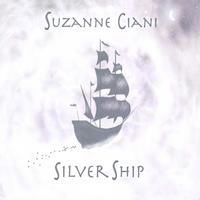 Suzanne's Website Suzanne's Artist Page on MainlyPiano
Album Links
AmazoniTunesCD Baby
This site contains affiliate links to products. We may receive a commission for purchases made through these links.
Silver Ship
Suzanne Ciani
2005 / Seventh Wave
37 minutes
Review by Kathy Parsons
Silver Ship is the first album of new material from five-time Grammy nominee Suzanne Ciani since 1999’s Turning. Like that album, many of the tracks feature members of her performing group, The Wave, most notably Paul McCandless on a variety of reed instruments, Matt Eakle on flute, Teja Bell on guitar, and Michael Manring on bass. Also very notable is phenomenal cellist Joe Hebert. Most of the music is light and breezy, creating an atmosphere of peace and serenity. Ciani says her muse had been dormant for five years and made an appearance while she was visiting family in Italy, the scene of many of her musical creations over the years. Not as experimental as earlier work, this is the music of a mature artist creating for the love of it. Ciani’s classical roots are clear in the orchestrations, but her long history in electronic music is also apparent, as is her deep love of the ocean.

Many of the arrangements are full, lush orchestrations, but the most poignant piece on the album is the simplest. “Sargasso Sea” is an incredibly beautiful duet with Ciani on piano and Joe Hebert on cello. This is one of Ciani’s most emotionally compelling pieces ever, and Hebert’s soulful cello cuts right to the heart. This piece is worth the price of the CD alone - it’s a knockout! I also really like “Snow Crystals,” a more electronic piece that sparkles and dances with tiny bell sounds and oboe, as well as bass - the is classic Ciani, mixing acoustic with electronic to great effect. I also really like “Wine Dark Sea,” a rhythmic, exotic piece that features Paul McCandless on oboe and Teja Bell on guitar. Dark and mysterious, this piece has a hypnotic flow. “Capri” is a joyful little confection that features Matt Eakle on flute - again classic Ciani. “Eclipse” is a little bit darker, with lots of strings along with the piano - very symphonic, and very deeply felt. The title song is a sweet lullaby sung by Valerie Wilson. The instrumentation is very simple - mostly acoustic guitar with some electronic voices and effects.

Suzanne Ciani has been one of my favorite composers for many years, and I teach her piano solos literally every day. I love her piano work best, but this album is a gentle, soothing collection of beautiful music performed with some of her favorite musicians. I don’t think Ciani’s many fans will be disappointed with this album, and a couple of the songs are among her very best. Samples are at www.seventhwave.tv, and the album can be purchased at that site or many online and offline record stores. Recommended!
July 10, 2005
Suzanne's Website Suzanne's Artist Page on MainlyPiano
Album Links
AmazoniTunesCD Baby
This site contains affiliate links to products. We may receive a commission for purchases made through these links.
More reviews of Suzanne Ciani albums 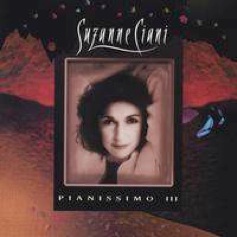