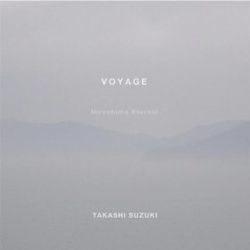 Takashi's Artist Page on MainlyPiano
Album Links
Amazon (referral)iTunes
This site contains affiliate links to products. We may receive a commission for purchases made through these links.
Voyage
Takashi Suzuki
2013 / Takashi Suzuki
65 minutes
Review by Kathy Parsons
Voyage - Hiroshima Eternal is the third release from artist/sculptor/architect/electronic musician/composer Takashi Suzuki. Born and currently residing in Hiroshima, Japan, Suzuki designed a monument for Edmund Blunden’s poem, “A Song for August 6th, 1949,” which won first place in a competition in 1975 and stands in the garden of The Hiroshima Central Library. The sculpture features the words to the poem in both English and Japanese and is still a stunning and moving tribute to the spirit and resilience of the city and its people following one of the darkest days of modern history (see photos below). Despite the title, the music composed for this album is neither a memorial nor a protest against nuclear weapons. It is Suzuki’s imaginary story of someone who died in the event and then journeys through the unknown spiritual world. The eight tracks and their titles are the imagined stages of the journey, ending with reincarnation and a new life.

It is interesting to note that Suzuki composes his music in a similar manner to creating his visual artwork, finishing one piece before moving to the next and allowing the previous work to influence the new work. This gives his music a linear quality and continuity that is its own evolution. Very minimal as well as ambient, the music has a dark, soulful quality that is sometimes mysterious or mournful and sometimes a bit lighter and more hopeful (but not joyous). The mood lightens gradually as the journey progresses and the spirit finds its way and discovers its purpose. Created with synths, the instrumentation includes ethereal and atmospheric sounds, strings, voices, bells, light percussion, and other sounds without any specific cultural reference. As with Suzuki’s previous releases, the sound quality is full and rich. Resonance, his debut, received the 2011 Best Ambient Album award from Zone Music Reporter, and Cycle was nominated as the Best Relaxation/Meditation Album and Best Ambient Album for 2012 by the same organization. I would fully expect similar acclaim for Voyage, another extraordinary musical experience from this fascinating artist.

Voyage is available from Amazon, iTunes, and CD Baby. Recommended!

June 21, 2013
Takashi's Artist Page on MainlyPiano
Album Links
Amazon (referral)iTunes
This site contains affiliate links to products. We may receive a commission for purchases made through these links.
More reviews of Takashi Suzuki albums 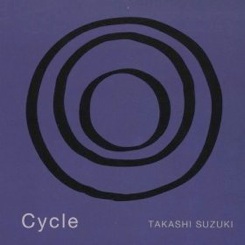