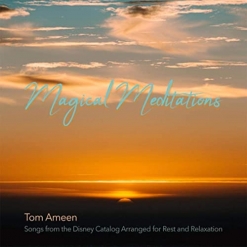 Tom's Website Tom's Artist Page on MainlyPiano
Album Links
Amazon (referral)Apple/iTunesSpotify
This site contains affiliate links to products. We may receive a commission for purchases made through these links.
Magical Meditations
Tom Ameen
2021 / Tom Ameen
53 minutes
Review by Kathy Parsons
Magical Meditations is a collection of fourteen Disney songs arranged for piano (some with light instrumental accompaniment) and intended for the quieter times in life - relaxation, studying, meditation, sleeping, etc. Arranged and performed by Tom Ameen, the music comes from classic Disney movies, theme park attractions, and The Mickey Mouse Club television show. Tom recorded the music using a felted piano, a technique where felt or another soft cloth is placed inside the piano to soften the percussive effect of the hammers hitting the strings. This often allows more of the sounds of the piano action to come through, too, but they don't on this recording. It's a really interesting selection of songs that goes back as far as Dumbo (1941), Peter Pan (1953), and Mary Poppins (1964) up through Tangled (2010), evoking childhood memories for several generations of Disney fans! There is nothing showy or flashy in Tom's arrangements for this album. This is music intended to calm and relax as well as to provide a warm and very pleasant backdrop for other activities.

Magical Meditations begins with "Circle of Life" from The Lion King, a piece I worked on with many of my piano students over the years. A flute takes the melody for a small part of the song, but this one is mostly piano. "I'll Make a Man Out of You" from Mulan has an unexpected gentle grace and is a beauty! "Baby Mine" (Dumbo) is made even more poignant with cello playing in a few passages - a sweet and tender lullaby. "It's a Small World" comes from a water-based attraction at Disney parks around the world and originated at the 1964 New York World's Fair before moving to Disneyland in Anaheim, CA. This song overflows with innocence and is especially well-suited to the quiet tone of the felted piano. I was anxious to hear how "Under the Sea" from The Little Mermaid could be made to be relaxing, and Tom did a great job. The melody is intact, but is played at a slower tempo with a quieter attitude. Atmospheric keyboard effects soften the song even more, making this one of my favorite tracks on the album. "Part of Your World" is also from The Little Mermaid and perfectly expresses the dreamy, wishful/wistful tone of the song - another favorite. "Horizons" is the theme music from the now-closed Horizons ride at Epcot Center in Disney World (1983-1999). In keeping with the theme of the song, Tom's arrangement is dreamy and optimistic. "I See the Light" from Tangled is the most-recent song on the album, and expresses the warmth and tenderness of new love. Some of the song has flute as well as piano playing a gorgeous, soulful duet. "The Mickey Mouse Club March"is another song I couldn't quite imagine on an album like this. Tom's arrangement is happy, but is somewhat slower and more subdued that the original - a great reminder of a big chunk of my childhood spent watching "The Mickey Mouse Club" before dinner most evenings.

Magical Meditations is both fun (listening actively) and easy to let slide into the background for a warm yet unobtrusive musical accompaniment to activities that need more focus and concentration. The album is available from Amazon, Apple/iTunes, and streaming sites like Spotify. Check it out!
July 19, 2021
Tom's Website Tom's Artist Page on MainlyPiano
Album Links
Amazon (referral)Apple/iTunesSpotify
This site contains affiliate links to products. We may receive a commission for purchases made through these links.
More reviews of Tom Ameen albums 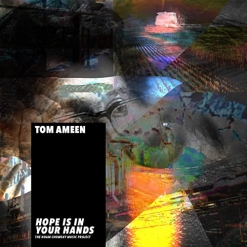 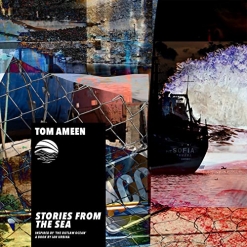 Stories From the Sea
with The Outlaw Ocean Music Project
2021 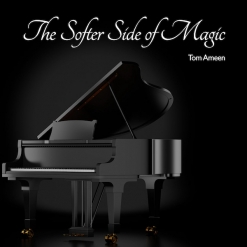