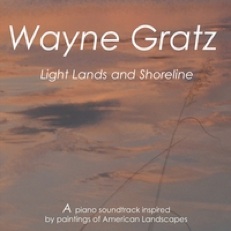 Wayne's Website Wayne's Artist Page on MainlyPiano
Album Links
iTunesAmazon (referral)
This site contains affiliate links to products. We may receive a commission for purchases made through these links.
Light Lands and Shoreline
Wayne Gratz
2007 / Wayne Gratz Music
61 minutes
Review by Michael Debbage
From 1989 to 1995, Wayne released four stellar albums with Narada Records. It appeared he could do no wrong despite the demanding recording schedule. However, the genre had peaked commercially and it seemed the artist had too, releasing the rather average A Gift Of The Sea. It was strangely followed up by no less than four cover albums without any original material. But, since 2002, Gratz has been on another major winning streak reliving his heydays. Needless to say his latest creation Light Lands and Shoreline shows no indication of this streak stopping.

Once again, it is Wayne Gratz’s loosely structured melodies that will keep your attention but never overwhelm you allowing you to focus on the music without putting you on sensory overload. No better place than to find this courtesy of the opening track “The Window Glow” with its distinct and original reoccurring chime. With even less edges there is the fluid “Waters Flowing Softy” thus the music is in utter unison with its song title. Meanwhile, the rhythmic “American Dream” leaves you with the visual of Gratz rolling back and forth over his keys in an almost percussive fashion. Comparable configurations occur on the closing harmonic “Home”.

While the album does focus on Gratz and his piano there is also the soft lush swirling synthesized strings of “Gardens” that brings to mind themes he explored on his more optimistic album Blue Ridge back in 1995. Similar instrumentation and themes continue on with “House By The Water”. It is here that the wispy synthesizers are even less obvious and continue to reappear throughout the album as found on the moodier “Market Place”.

Apparently, Gratz was commissioned to create a DVD soundtrack to promote Thomas Kinkade’s latest paintings. Whether you are a fan of Kinkade or not, Light Lands and Shoreline stands alone as its own musical entity. It also represents another triumphant album from this understated and sometimes underappreciated pianist currently reliving the stellar streak of his Narada years.
April 14, 2008
This review has been tagged as:
Michael's Favorites: 2008
Wayne's Website Wayne's Artist Page on MainlyPiano
Album Links
iTunesAmazon (referral)
This site contains affiliate links to products. We may receive a commission for purchases made through these links.
More reviews of Wayne Gratz albums 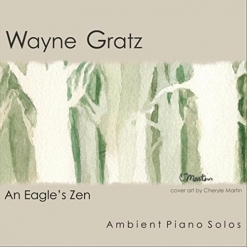