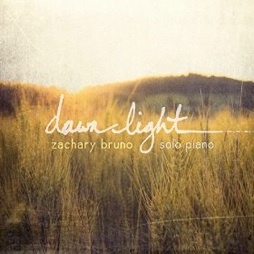 Zachary's Website Zachary's Artist Page on MainlyPiano
Album Links
Amazon (referral)iTunes
This site contains affiliate links to products. We may receive a commission for purchases made through these links.
Dawn Light
Zachary Bruno
2014 / Zachary Bruno
40 minutes
Review by Kathy Parsons
Sometimes a stunning debut album comes along that is never equalled or surpassed by subsequent releases, but Zachary Bruno’s second album, Dawn Light, clearly indicates that he is the real deal. At 20, he composes music with an extraordinary grace and plays with an expressive touch that is rare in someone his age. I saw Zach play live during the Whisperings Solo Piano Radio Awards dinner a few months ago, and after he had played for only a few seconds, the room went silent. We’d been enjoying non-stop piano music for several hours, but everyone there seemed to sense that this was something really special. That piece was “Here,” which is track 4 on the album, and each time I hear it, it takes me back to those magical moments in Anaheim. Dawn Light was recorded at Piano Haven in Sedona, AZ on Joe Bongiorno’s Shigeru Kawai SK7L, a piano that beautifully conveys Bruno’s gentleness and velvet touch on the piano keys. Currently living in the desert of Arizona, Bruno was born in Ottawa, Canada and grew up in a suburban neighborhood in Texas. Much of his music is inspired by nature as well as his imagination.

Dawn Light begins with the title track, a lively yet delicate piece that expresses the hope and peaceful anticipation at the dawn of a new day. “Oak” is slower and more stately - gently majestic, if you will - and absolutely gorgeous. “Windmill” has a joyful sparkle and a carefree innocence that could elevate any mood. “Here” is almost fragile, its beautiful melody and rubato rhythms expressing emotions while soothing the soul. This really is a remarkable piece! “Ocean of Sky” is another favorite. Very upbeat, light and delicate, it is almost euphoric as Bruno’s fingers dance around the keyboard, often in the upper registers of the piano. “Looking Up” is another favorite and a gentle reminder to take the time to be fully present and aware of where we are. This is one of the most beautiful pieces I’ve heard in awhile - so delicate, honest and heartfelt. We need sheet music for this one, Zach!!! “Aspen Starlight” ends the album with a peaceful, quiet sparkle. For me, it seems to convey the vastness of the moonlit sky as the stars twinkle like brilliant gems on black velvet. What a great album and sure to be a Favorite for 2015!

Dawn Light is a must-hear for anyone who loves quietly expressive solo piano music with substance (not ear-candy!). Zachary Bruno is a composer who reaches deep within, leaving his heart open and showing us the beauty there. He is truly one of a kind and I give Dawn Light my highest recommendation. Bravo, Zach! It is available from Amazon and iTunes.
April 24, 2015
This review has been tagged as:
Kathy's Favorites: 2015Whisperings Album of the Year
Zachary's Website Zachary's Artist Page on MainlyPiano
Album Links
Amazon (referral)iTunes
This site contains affiliate links to products. We may receive a commission for purchases made through these links.
More reviews of Zachary Bruno albums 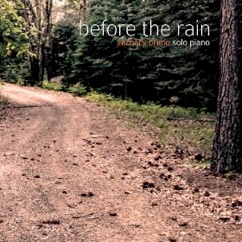