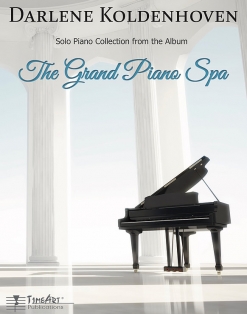 Darlene's Website Darlene's Artist Page on MainlyPiano
Songbook Links
CD Review
This site contains affiliate links to products. We may receive a commission for purchases made through these links.
The Grand Piano Spa
Darlene Koldenhoven
2021 / Time Art Publications
9 pages / 38 songs
Review by Kathy Parsons
The Grand Piano Spa songbook is the companion sheet music collection for Darlene Koldenhoven's solo piano album by the same name. All nine of the original piano solos from the 2021 recording are included, ranging in difficulty from upper-intermediate to early-advanced. I have found all nine of the pieces to be very enjoyable to play and will revisit this book often!

The layout of the scores is well-spaced and easy to read. Each piece includes metronome settings and ample dynamics for playing with expression. Darlene is blessed with large hands, so there are a few reaches in the music of more than an octave, but pianists who can't reach those chords are encouraged to roll them or shorten them as needed to fit their own hands. The moods and experiences expressed in the music are varied, something that I think adds to the enjoyment of playing the music. This would be an excellent book to work on with adult and teen piano students as well as for pianists to play for their own enjoyment.

Darlene Koldenhoven brings a wealth of experience to her music from life in general to her wide-ranging music career. Her 2017 vocal album, Color Me Home, won a staggering 20 awards including Zone Music Reporter's "Best Vocal Album" and received 35 nominations. Her 2019 Chromatones, an instrumental album that features some of the biggest names in New Age music, was named "Music of the Year" by COVR Awards plus other awards and nominations. Although her resumé would fill pages, Darlene is possibly still best-known as the lead soprano singing “Aria” on Yanni’s 1993 tour and Live At the Acropolis concert video and PBS special. She received an MVP award from the GRAMMY organization for “Best Studio Singer” for singing on more than a thousand recordings that include movies, television shows, CDs, commercials, live shows, and charitable causes; she has been nominated for three other GRAMMYs. Darlene was also the tambourine-waving nun in both Sister Act films and worked off-camera as the production vocal coach, vocal contractor, and music director for those films. This is just a brief outline of Darlene's career so far, and she she really knows her "stuff"!

The titles of the songs, they key(s) they are in and the number of pages are:

May 18, 2021
Darlene's Website Darlene's Artist Page on MainlyPiano
Songbook Links
CD Review
This site contains affiliate links to products. We may receive a commission for purchases made through these links.