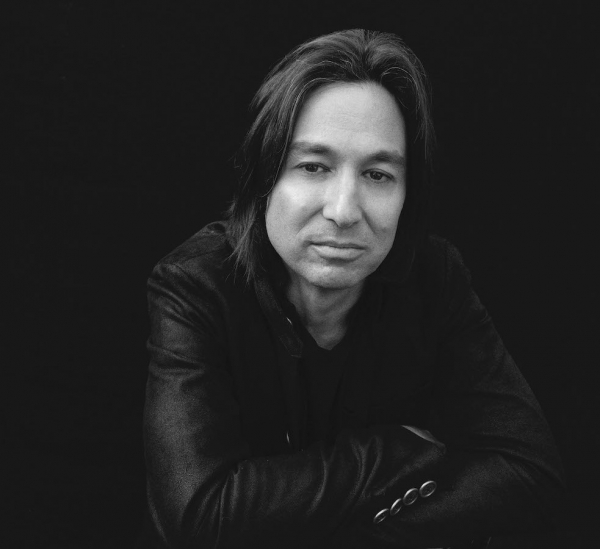 Photo by Jeff Forney.
I recently discovered what a joy it is to hear from an artist I’ve worked with in the past but haven’t heard from for a while! I was just starting to write reviews and interviews for anything other than my monthly “Pianotes” newsletter back in the late 1990’s when Loren Gold released his first album, Reflections of Gold. We did quite a bit of work together for a few years, but then I didn’t hear from him until he emailed me earlier this year. What a happy surprise it was to discover that he is now the touring keyboardist for The Who! Whoa! While touring is at a standstill, Loren is composing piano music again, so I thought it was a good time to catch up! Enjoy!


LG: I’m good, considering!  I have plenty of side projects and things I've been working on.


KP: That’s great! Are you still based in Southern CA?

KP: We did an interview for my “Pianotes” newsletter back in May 1999, but somehow it never made it onto MainlyPiano.com. I’ve been trying to fix that, but, short of retyping the whole thing, I guess that won’t happen before this interview gets posted. Anyway, we’ve known each other for a long time! We were scheduled to do a workshop with my students in June of ’99, but that got postponed and it looks like we weren’t able to make it happen. I thought sure we’d met somewhere along the line, but I guess not. Is my memory correct on that? 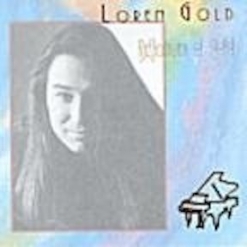 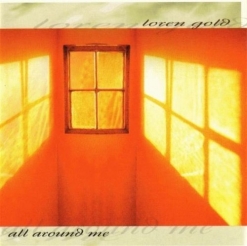 Click on the above covers to go to
Kathy's reviews. Michael's review 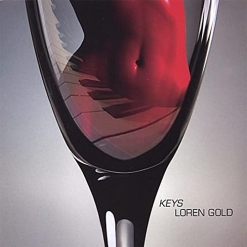 You released your first solo album, Reflections of Gold, in 1998 and I reviewed it for the print version of Wind and Wire magazine. All Around Me came out in 2001 and I reviewed that for SoloPianoPublications.com. I loved both albums, and then it seems you disappeared from my radar until earlier this year. You released an album called Keys in 2005. That one must really be good because Amazon has it for sale for $85.14 and $90.10 - plus shipping! I never got the chance to hear that one, I’m sorry to say. Have you released any other albums? Singles?


LG:  I wouldn’t pay it!  After Keys was released, I composed pop / rock songs for many years.  I connected with a fantastic songwriter named James Renald, and we hit it off immediately.  The first song we wrote together was recorded by then newly-crowned American Idol winner, Taylor Hicks.  I became his keyboard player and Musical Director, and the next thing I knew, I was all over national television performing MY song...it was a thrill.  The Tonight Show, Good Morning America, The View, etc...


KP: Wow! Somehow I missed all that!

Some of your music was included in the Solo Piano Publications songbook that was supposed to be the first of a “New Voices Series” back in 1999. Three of your piano solos were transcribed for that songbook and I did a sketch of you that was also included. Has any more of your music been transcribed?


LG:  People have been asking for transcriptions, but I have not put anything out. It is something I would like to do again.


KP: I was blown away to learn that you have been touring with The Who as their keyboardist! When did you start touring with them?


LG:  I started touring with Roger Daltrey in 2009 and with The Who in 2012.  It's been an amazing ride, playing some of the greatest music ever composed in stadiums and arenas all over the world.  We are not done!


KP: I’m so glad to hear that! Have you also recorded with them?


KP: I remember you were touring with some other pop stars. Who are some of them?


KP: Have you done any songwriting for any of the other artists you have worked with?


LG:  Taylor Hicks is the biggest name.  Yes, I have written with other artists that I’ve worked (and recorded) with. 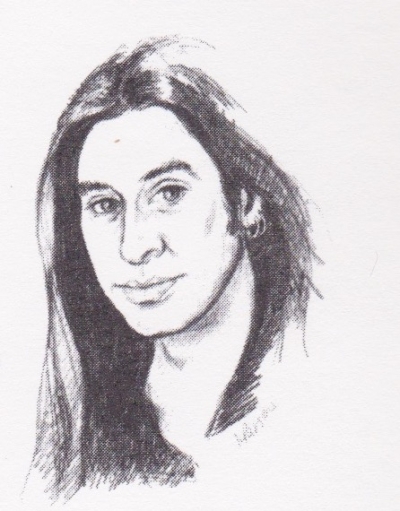 Kathy's sketch of Loren for the SPP "New Voices" songbook.


KP: Now that touring has come to a halt for almost all musicians, are you doing more solo piano music?


LG:  Yes, I’ve kind of re-discovered it.  I actually just released an instrumental song on Bandcamp, and I plan on releasing more.  It's so easy to upload and release a song these days, not like in '99!  Also, I have a new Yamaha C7 piano, which inspires me to play and write.


KP: That must be “Anyway the Wind Blows” that you sent me a few weeks ago to listen to. I love it! Will it be part of a new album?


KP: Do you miss being on the road?


LG:  Yes, very much.  I'm confident we will be out there again.


KP: What would be your dream tour as a keyboardist?


LG:  I’m living the dream now!  Playing keyboards for The Who, touring the world, performing for 20K plus fans a night.  C'mon!

I see that you’re also doing real estate. Is that a new endeavor? 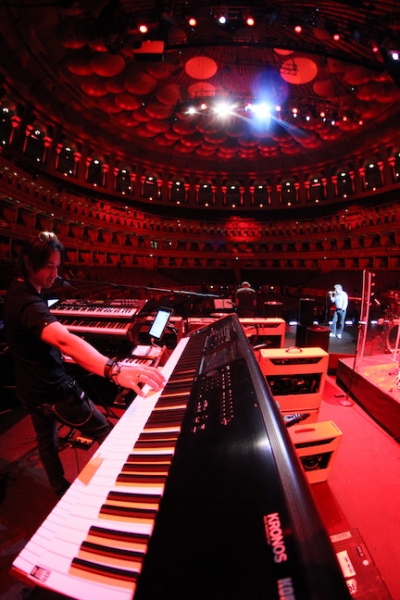 LG:  I’ve been involved with real estate for several years.  I recently teamed up with Josh Flagg, one of the top agents in California and star of Million Dollar Listing LA.  I've always had a passion for Real Estate and investing, and it's something I can always do along with my music.  If you live in California and need a guy, well, I'm your guy!


KP: It’s too late for me, but we’ll pass the word along!

Okay, let’s backtrack a bit a learn more about your early life. Where were you born and where did you grow up?


KP: I remember you saying that you grew up in a musical family. Tell us a bit about that.


LG:  Everyone played something. My Dad played piano, my sister played flute, my brothers played clarinet and piano. I was surrounded by music.  They were all much older than me, and they listened to what is now considered classic rock.  Beatles, Who, Stones, Chicago, Stevie Wonder, Carole King...it all just spoke to me.


LG: I was 6. I recently found my certificate from the Yamaha School of Music which proves it!


LG: About 10 years of private instruction.  It was all classical in the beginning, and then as I got older I started playing the pop songs on the radio.


KP: Were you encouraged to compose or improvise by your teachers?


LG:  One teacher in particular really encouraged me.  He didn’t mind when I strayed from the arrangement, and actually enjoyed it quite a bit himself.  He would bounce around and smile, as I frequently took songs in a completely different direction. 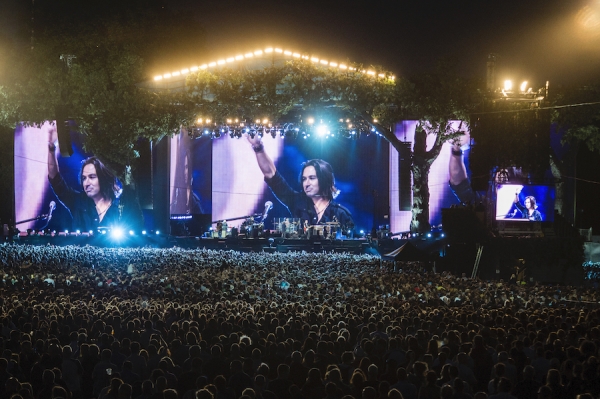 
KP: It’s really exciting for a piano teacher to discover that a student really loves music and “gets it,” so I can relate!

When did you write or compose your first song?


KP: When did you start playing professionally?


LG:  Around 2000 when I went on tour with Tiffany.  That was my first real taste of being on the road and playing music every night.


KP: Who were some of your favorite musicians when you were growing up?


KP:  Which instruments do you play besides piano and keyboards?


LG:  A bit of guitar, but nothing fancy! 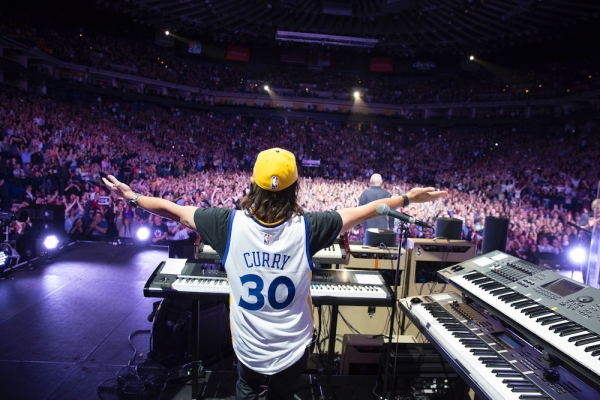 Playing at the Oakland Coliseum.
Photo by William Snyder 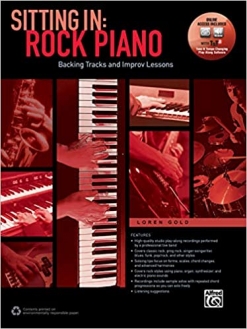 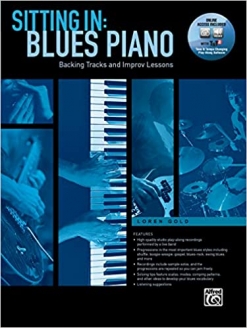 Two songbooks Loren did
for Alfred Publishing.
Available on Amazon.com


KP: Who and what are some of the influences on your music?


LG:  I was influenced by songwriters, not necessarily keyboard virtuosos. The ones that inspired me were melodic, pop composers of the 60's and 70's, i.e. The Beatles, Billy Joel, Carole King...the artists I've mentioned.


KP: What has been your most exciting musical experience to date?


LG:  Performing at Fenway Park, Royal Albert Hall, Rock in Rio, Hyde Park, Glastonbury.  I know that’s more than one, but they were all so great! Performing at Oakland Coliseum, the venue where I grew up going to concerts and where my family is from, will always be special.  The greatest part of playing there was wearing my Stephen Curry jersey during the band introductions, and hearing the crowd go crazy!  I have a wonderful picture that our tour photographer took of that moment.


KP: I went to some great concerts at the Coliseum, too, having grown up in Oakland!

If you could have any three wishes, what would they be?


LG:  I think you covered everything, thanks Kathy!


KP: Thanks for checking in a few months ago, Loren! It's great to be back in touch!

Many thanks to Loren Gold for taking the time to chat! For more info about Loren and his music, be sure to visit his website and his Artist Page here on MainlyPiano.com.