Greetings!
Once again, I’m asking myself how it got to be the first of the month already! All of the back-to-school sales seem premature, but I guess they really aren’t. It’s been a busy summer, but things are moving along. Mom is healing well and almost back to normal. Her cast is off, but she needs to wear a brace on her wrist for a few more weeks. We’re getting there! I hope your summer has been fun and productive, too!
Mozart was the first great piano virtuoso (master). He also wrote the first piano duet in 1765.

Blue is the color mentioned most often in song titles. Black, red, white, and green follow in that order.

In addition to “inventing” the piano, Bartolomeo Cristofori invented the "una corda" pedal (the soft pedal) in about 1726.
New Reviews: We have quite a few new reviews for you this month. It’s an interesting mix of musical styles with new releases from Louis Landon, Fiona Joy, Peter Calandra, Donovan Johnson, John Paris and several others. I also reviewed David Hicken’s newest instructional book, How To Make a Living as a Pianist and Composer and new songbooks from Doug Hammer and Joseph Akins. That should keep you busy for a little while!
The first performances of piano solos in concert were by J.C. Bach (one of J.S.Bach’s sons) in London, and Henry Walsh in Dublin, Ireland in 1762.

One of the earliest recordings of a piano performance was by Johannes Brahms playing one of his Hungarian Dances.

"Nipper" was the name of the dog RCA Victor used in its trademark "His Master's Voice." Nipper lived from 1884-95, and was born in Bristol, England. He first became the symbol of the Gramophone Company, then the Victor Talking Machine Company, and finally RCA Victor in 1929. For 22 years, the city of Baltimore, Maryland had a 15' statue of Nipper, which they sold in 1975 for $1.

New Reviewer: We welcomed a second part-time reviewer to MainlyPiano.com in July. Pianist/composer/professor/great friend Joseph Akins will be writing occasional reviews of some of his favorite new releases as time allows in his busy schedule. Welcome, Joseph!
In the 1920's, before the radio became the main source of entertainment in American households, and long before television, there were more player pianos in the US than regular ones.

Interviews: I didn’t get any interviews done in July, but I plan to have at least two new interviews in August and hopefully one this week.
Vladimir de Pachmann, a piano virtuoso of the late 19th and early 20th centuries, claimed that milking cows was the best finger exercise there was.

Until about 1750, the thumb was rarely used in keyboard playing. It was supposed to "hang loosely" below the keys. Movement around the keyboard was accomplished by crossing the 4th finger over the 5th, and the 3rd over the 4th or 2nd which is now considered to be poor form.

August House Concerts: I’m very excited about the two concerts coming up in August! Tom Grant will be here on August 10th for his first Florence house concert. Tom has had a long and very successful career and I’m really looking forward to meeting him and having him play here. On August 26th, Dan Chadburn and Tom Nichols will return for their fourth annual fundraiser for the Oregon Coast Humane Society. I have the flyers for both concerts posted, so just click on the links from the artists’ names to go to their flyers for more info.
Fathers are mentioned more often in song titles than mothers.

In the 1850's, Joseph P. Hales started the practice of making cheap pianos and stenciling any name the distributors wanted on them. These are still referred to as “stencil brands.”

The French horn was invented and developed in Germany.

Louis Colaiannia Concert: Louis Colaiannia returned for his third concert here on July 13th and I think it was his best performance that I have seen. It was the first time here that he did the whole concert solo and it was excellent from start to finish. Here are a few photos: 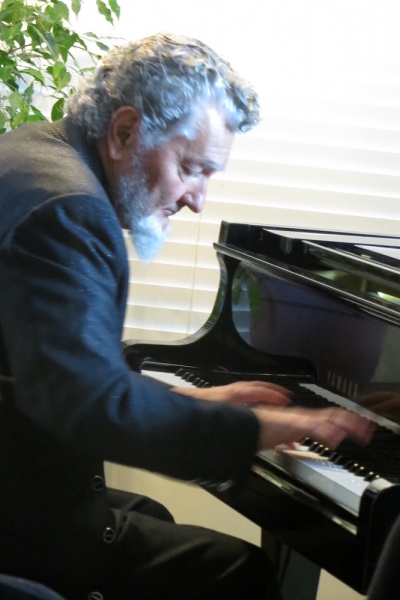 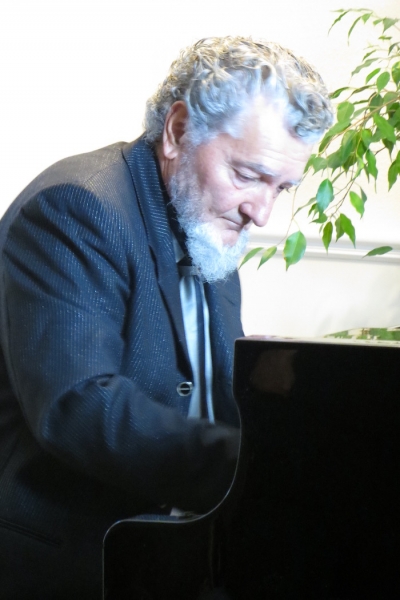 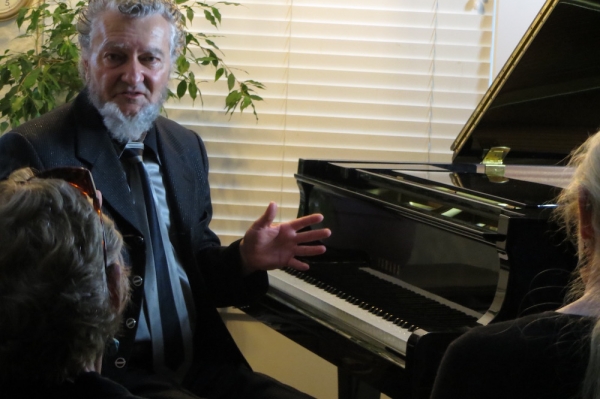 How often should a piano be tuned? In most concert halls, the pianos are tuned for every performance and major rehearsal---as many as twenty times a month! New pianos should be tuned four times the first year. After that, most pianos can get by with tunings every six months or so.

The first motion-picture soundtrack recording was the music for "Snow White and the Seven Dwarfs" which was released on Victor Records in 1938.

Ed and Carol Nicodemi’s Concert: On July 29th, Ed and Carol Nicodemi traveled from New York City to perform in concert with us. It was their first time in Oregon and I am honored that they chose to perform their Oregon debut here in Florence! Ed has released several solo piano albums under his full name - Edmund Paul Nicodemi. His wife, Carol, is a singer/songwriter and they have also released several albums of original folk music and jazz as a duo. It was a varied concert and a lot of fun. Here are a few photos from that concert: 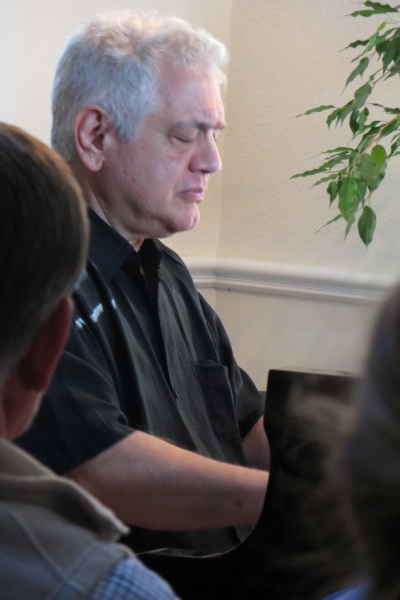 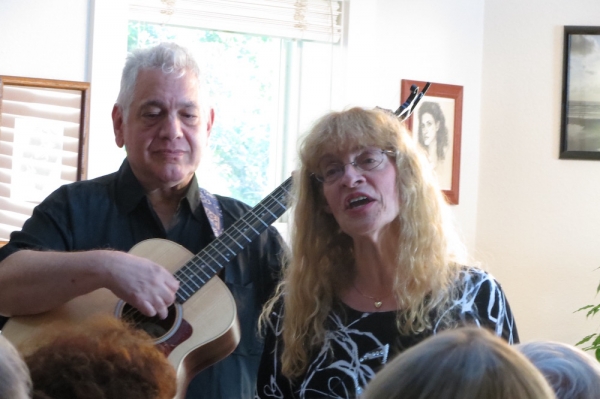 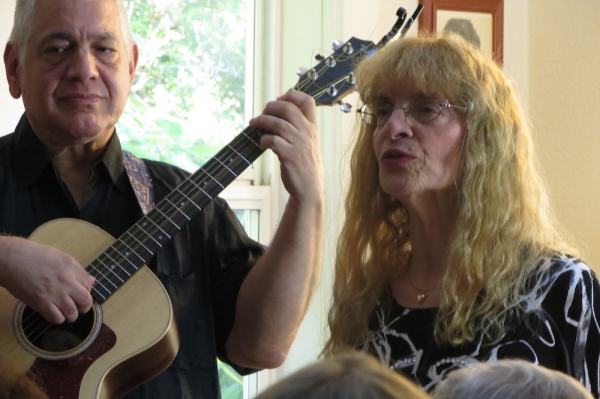 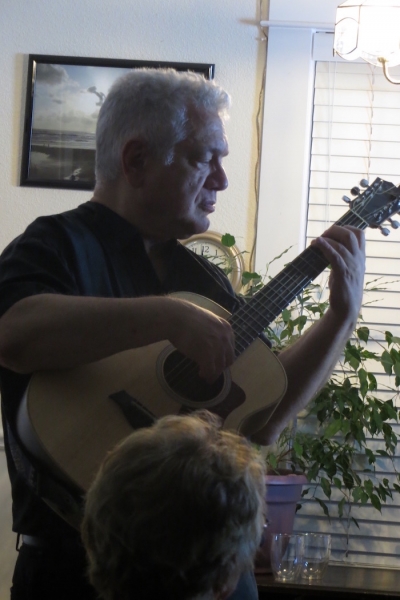 The government of Austria spends more money on the Vienna Opera than on national defense.

Daisy and Violet Hilton may have made up the most unusual jazz band ever. They performed all over the East Coast in the 1920's and '30's, with Daisy playing the saxophone and Violet playing the piano. What made them so unusual? They were Siamese twins joined at the hip.
August Birthdays: Here is a list of some of the musical birthdays coming up in August:

Jazz was the first musical style to originate in the United States.

American composer, Charles Ives (1874-1954) was also an insurance company executive.
That should wrap it up for the August issue! Have a great month!