Greetings!
Here we go into June already! May has been a busy month, but a good one. We’re still getting rain off and on, but the sun is actually coming out from time to time and the rhododendrons are in full bloom. (Florence, OR is known as The City of Rhododendrons for a good reason!) I hope your late-spring/early summer is going well!
Sukiyaki” is the only Japanese-language song ever to be #1 on the Billboard pop charts. The original title was “Ue O Muite Aruko” (“I Look Up When I Walk”), but executives at Pye Records changed the title to “Sukiyaki” (roughly translated, “Beef Stew”), assuming that English-speaking audiences would remember that title easier. Even so, some of the cover versions still mangled the title, calling it “Saki Yaki,” “Sukiyaka,” “Sukijaki,” “Sayonara,” and “Sukujahi.”

An “earworm” is a song or jingle that gets stuck in your head and you can’t get it out.

New Reviews: There are twelve new CD reviews and one new music book review this month. The CDs include quite an assortment of music from all over the world, so check ‘em out here. The new book review is for David Hicken’s latest instruction book called Music Theory for Pianists. He covers a lot of territory and makes it interesting and easy to understand. The link to that review is here.
The song that begins "Take me out to the ball game" was written about a young lady named Katie Casey who compulsively spent all of her money on baseball tickets, peanuts, and popcorn.

In 1900, there were 7000 piano manufacturers in America, including families who made pianos in their homes. One out of every six people in America was involved in some aspect of the piano business.

New Interviews: I did two new artist interviews in May, and both may be new names for you. The first is with Summer Swee-Singh, an artist I met when I was in southern CA in January and whose music blows me away. The second is with Clifford Borg, a composer/pianist from Malta whose music I discovered recently and like very much. Those links are available here.
One of the earliest recordings of a piano performance was by Johannes Brahms playing one of his Hungarian Dances.

Julia Ward Howe, writer of the words to “The Battle Hymn of the Republic,” was the first woman elected to the American Academy of Arts and Letters.

From about 1916 to 1925, almost every concert pianist of any prominence in the US made player-piano rolls.
Concert with Samer Fanek: We did one house concert here in early-May and it was amazing! Samer Fanek is an artist I discovered last fall and reviewed, and then we met in Southern CA when I was down there in January. Samer grew up in Jordan and Poland, but came to the US to do graduate work in computers. I loved his debut album, Wishful Thinking, so when we met in LA, I asked him about doing a concert here. Samer lives in San Francisco now and this was his first time to play in Oregon. He really did an amazing job! The first half of the concert was solo piano versions of his more orchestrated pieces from his album and the second half included his solo piano arrangements of Jordanian folk songs, a few pop standards, and his own arrangements of some of Yanni’s music. It was a varied concert and everyone seemed to love it! Here are a few photos: 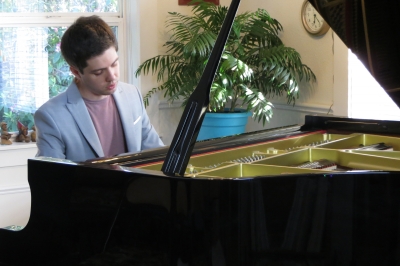 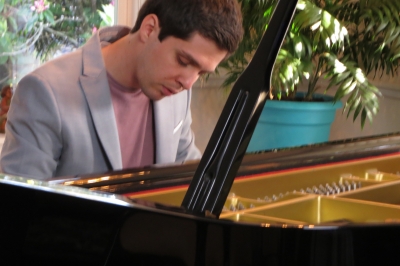 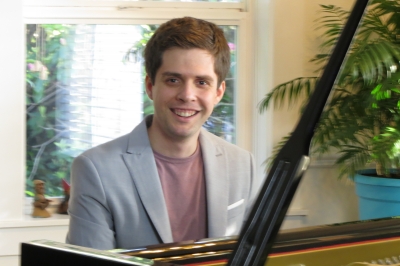 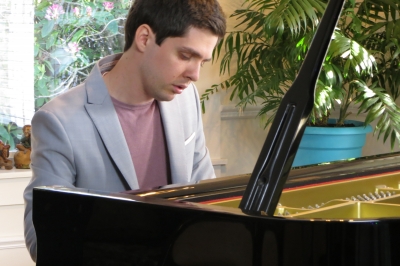 Roy Clark was the first US country artist to perform in Moscow.

In the 1920's, before the radio became the main source of entertainment in American households, and long before television, there were more player pianos in the US than regular ones.

Two June House Concerts: Starting in June, we’ll be having two house concerts a month through October. In June, we’ll be welcoming world flutist Gary Stroutsos and jazz pianist and accordionist John Paris. Gary will be here on June 3rd and his program will be mostly Native American music and storytelling. The flyer for that concert is here. John Paris will be here on June 22nd with selections from a couple of albums he is working on and some old favorites. The flyer for that one is here.
Until about 1750, the thumb was rarely used in keyboard playing. It was supposed to "hang loosely" below the keys. Movement around the keyboard was accomplished by crossing the 4th finger over the 5th, and the 3rd over the 4th or 2nd which is now considered to be poor form.

Between Civil War battles, brigadier General Daniel Butterfield worked with his bugler and wrote the tune for “Taps.”

The Chickering Piano Factory, which was completed after Jonas Chickering's death in 1853, was the second largest building in America at the time. (The White House was the biggest.)
June Birthdays: I’m not sure why it is, but June always seems to be the month with the most piano-related birthdays. Check it out:

Happy Birthday to all of us!!!
Early pianos had 54 keys, while today's piano has 88. There are several piano makers who add additional keys to give their most expensive pianos more resonance.(Stuart and Sons in Australia has 102-key and 97-key grands, and some Bosendorfer pianos also add keys to the bass.)

That's all the news for this month. I'll add some "bonus" trivia below. The photos are from the Rhododendron Festival parade here in Florence on May 21st. The second trumpet player from the left is my piano student, Winnie.
Have a great June, Happy Father's Day to the dads, Happy Graduation to those finishing up at a school, and HAPPY SUMMER to everybody! 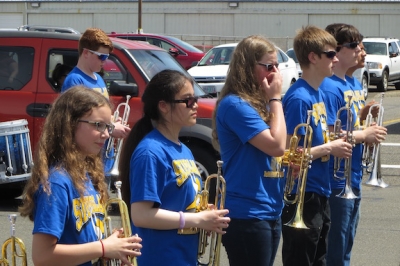 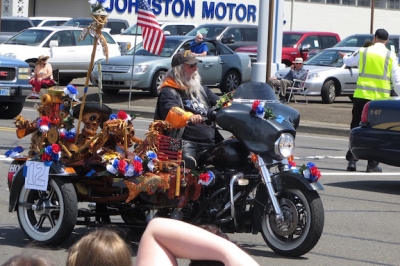 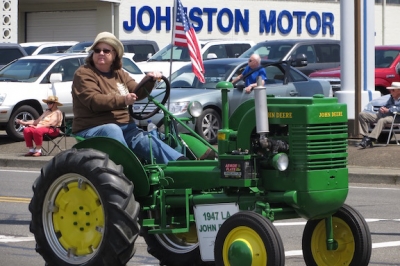 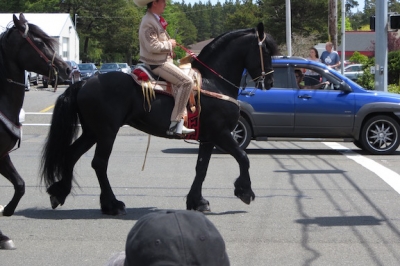 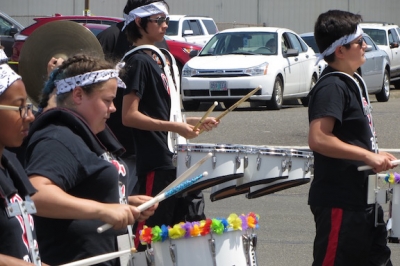 Willie Nelson only made $50 for his song "The Family Bible." He sold the rights early, and it made the people who bought those rights a lot of money.

Besides hearing loss, musicians suffer from other work-related injuries. Pianists sometimes get inflamed tendons in the hands and wrists. Brass players can suffer dental problems from pressure on their mouths. Woodwind players are prone to wrist and hand damage. Violinists and violists are often pained by neck, back, and shoulder problems. 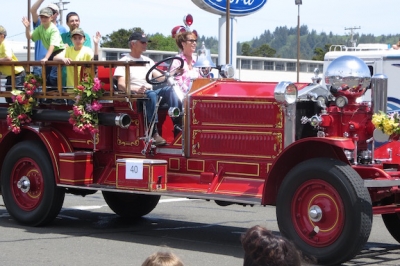 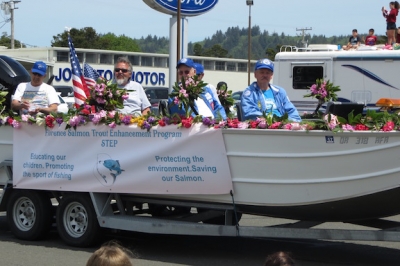 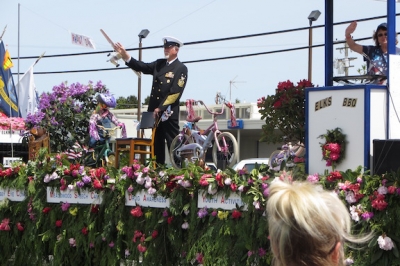 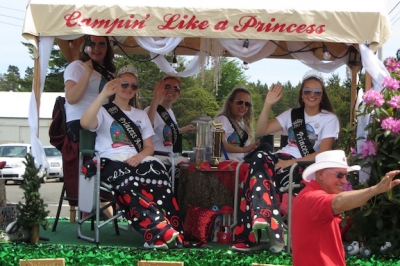 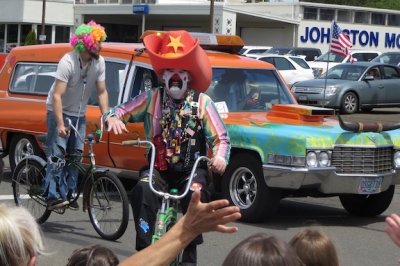 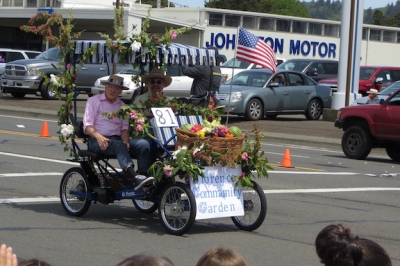