As you may have already noticed, there are a LOT of photos in this issue! Most are from the weekend in Kirkland, WA with the Whisperings group, but there are also some from Robin Spielberg’s concert here 3/12. I ran out of room, there were so many photos I wanted to use, but I chose my favorites of the 650 or so I took that weekend! There is lots of other “stuff” in this issue, too, so enjoy!
Pianist Andre Watts made his first appearance with the Philadelphia Orchestra at the age of 9.

An "English flute" is more commonly called a "recorder." It is said to be the easiest of all instruments to learn to play.
New Reviews: I did a lot of reviewing in March! There is quite a variety in the music so there should be something that will interest just about everyone. A few highlights to check out are new albums by Neil Patton, Brian Kelly, Joseph L. Young, and Benny Andersson (formerly of ABBA). You can see them all here. I also reviewed two new songbooks by Ryan Marvel, winner of Album of the Year at this year’s Whisperings event in early March. You can access both reviews here.
Seven octaves was the normal range on pianos from about 1850 until the 1890’s when an additional three notes were built into the treble, giving the piano its standard eighty-eight keys.

Viennese pianos of the 1790’s had a range of five octaves, from F 2 1/2 octaves below middle C to F 2 1/2 octaves above middle C. All of Mozart’s and most of Haydn’s piano music are contained within this range, as is Beethoven’s music until 1804.

About a fourth of the bones in your body are in your hands.

New Interview: I did a really interesting interview with Ovidio De Ferrari in March. I had the pleasure of meeting Ovidio at Whisperings last month, and we talked about all kinds of things in the interview. He lives in Dubai, has a music school there and is also an orchestral conductor in addition to being a wonderful pianist/composer. Here’s the link to the interview.

I’m currently working on interviews with Vicente Avella and Ryan Marvel, so watch for those coming up!
Legend has it that "Nero fiddled while Rome burned." This has been proven to be false. The violin wasn't invented until the Middle Ages, which was centuries after Rome burned. It is more likely that Nero played a lyre.

Grover Cleveland was the only president to be married in the White House. He was friends with William Steinway, who was the head of the piano firm of the same name, and Steinway gave the couple a Steinway grand as a wedding gift.

The earliest musical instruments were probably the ones found in caves in France by archeologists. They were carved bones that appear to have been wind and percussion instruments, dating back to about 25,000 BC.

April House Concert with Scott Cossu: On April 19th, Scott Cossu will be returning to Florence to perform a house concert! Guitarist Lonnie Mardis will be joining Scott for what promises to be an incredible evening of music! Here is the link to the flyer.
Until the 1790's, all of the music that was played by Americans was printed and published in England, even when it had originally been composed elsewhere.

The first gold record was "Chattanooga Choo Choo" by Glenn Miller. It was presented on his radio program on February 10, 1942. The first gold album was the original 1949 Broadway cast recording of "Oklahoma!"

Robin Spielberg’s Concert: We had the very special pleasure of kicking off this year’s house concert season with Robin Spielberg, one of my long-time favorite artists and a very good friend I actually met online about 25 years ago! As always, Robin told spellbinding stories and played music from many of her eighteen albums, including the brand new On the Edge of a Dream. David Nevue made the trip over from Eugene to be with us and played one of my favorites of his pieces, “Taking Flight.” It was a great evening! Here are some photos: 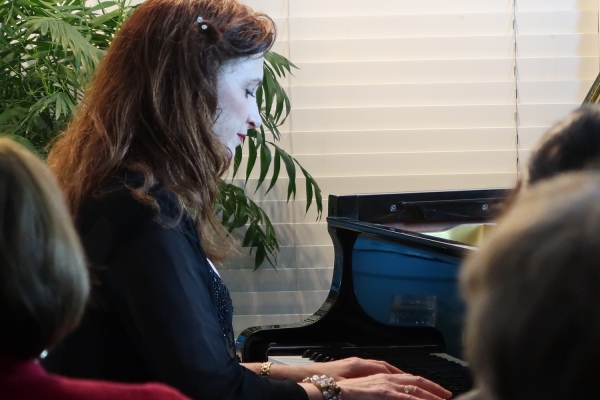 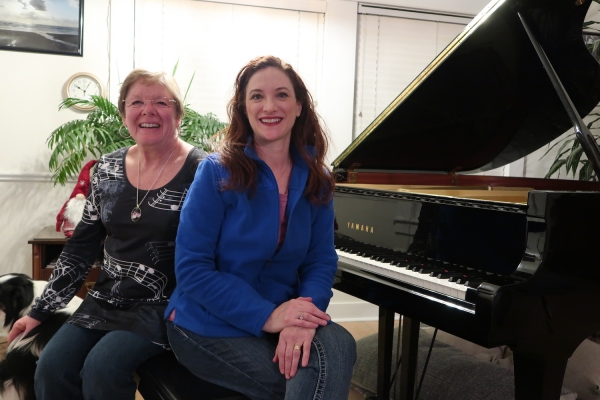 The word "news" was coined from the points of the compass. Early American newspapers ran drawings of the globe in their mastheads, and those drawings carried the N.E.W.S. designations to show that their reports came from all directions.

The Steinways began their careers in America working for other piano manufacturers and learning American manufacturing techniques. By 1853, they regrouped to form Steinway and Sons and began to make square pianos.

House Concert Schedule: There have been some changes to the house concert schedule since last month’s issue. Here is an update:

You can find all of the latest updates here.

Jonas Chickering (1796-1853) was the founder of a Boston firm that would become the first major American piano manufacturing success story. Chickering's pianos earned international praise and fame, and they were the first to introduce a design change that made American pianos distinctly different from European instruments: the use of the one-piece cast-iron frame.

Francis Scott Key, the man who wrote the words to "The Star-Spangled Banner," was a lawyer. He became a district attorney in Washington, D.C.

The practice of using plastic for piano keys instead of ivory really took hold in 1973 when Congress banned the importation of ivory.

April Birthdays: Here is a partial list of musicians celebrating birthdays in April:

Happy Birthday to all of you!!!!

The term "swan song" means some kind of ending or farewell. According to ancient legend, it was thought that the swan, silent throughout its life, sang aloud in its final minutes.

Upright pianos come in four sizes. A full upright must be at least 48" tall; a studio upright is 44"; a console is 39"-42" tall; and a spinet is 36"-38". Be careful, though, as a few makers are putting bigger wheels on their pianos so they can say they are taller! The first upright piano was built in 1800 by Mathias Muller (who also took out patents on railroad tracks and propellers).

Grand pianos come in three sizes: a "baby" grand is 4 1/2'-6' long; a full grand is 6'-8' long; and a concert grand is at least 8'-9' long. The length of the strings is a major factor in the quality of sound in a piano. A good grand piano is more responsive than an upright (the keys respond to the touch faster with a grand piano).

Whisperings’ 2018 Concerts and Awards: The weekend of March 2nd was the annual Whisperings weekend, this time in Kirkland, WA, close to Seattle. It was a fun and busy weekend with reunions with old friends, meeting artists I’ve reviewed but had never met, and making some new friends! The weekend started out with a “meet and greet” dinner at a restaurant near the hotel. It was there that we started hearing about some of the East Coast artists who were unable to fly out due to snow and wind. Even so, there were more than 50 Whisperings Artists there. I was the “official” photographer for the weekend, so I’m attaching some of my favorites between each event.

Saturday evening was the new Whisperings Discovery Concert in Bellevue. The first half of the concert featured Whisperings Artists who had never played in a Whisperings Concert before. They included Jon Dahlander, Mary Lydia Ryan (filling in for a missing East Coaster), Katheen Ryan, Kris Baines (from New Zealand!), Greg Starr, Anastasia (from Frankfurt, Germany!), Lynn Tredeau, and William Ogmundson. 
The second half of the concert featured some “classic" Whisperings Artists, including Joseph Akins, Rachel Currea, Greg Maroney, Amy Janelle, Christine Brown, Zachary Bruno, and Doug Hammer. The grand finale was an improvised duet with Joseph Akins and Doug Hammer. 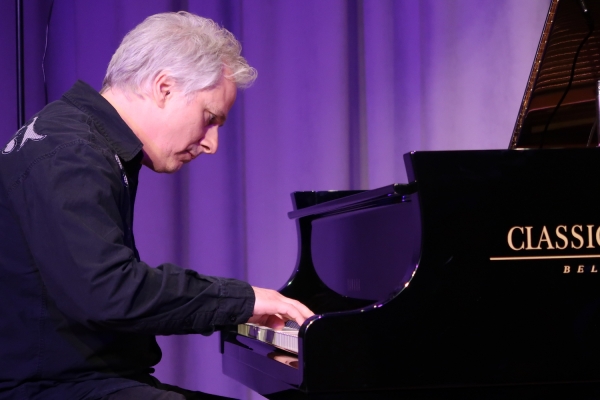 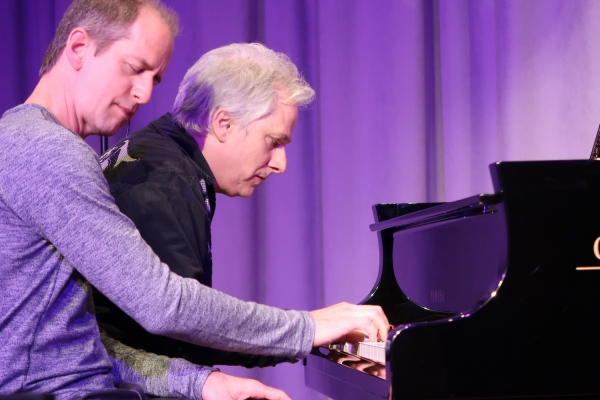 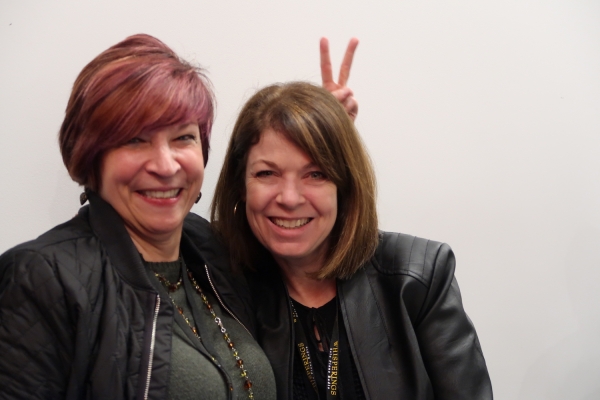 Pam Asberry and Rhonda Mackert hamming it up!


The big event was Sunday afternoon at a venue that we could walk to from the hotel. The “all stars” who played in the first half were Brad Jacobsen, Gina Lenee, Lisa Downing, Mike Strickland, Michele McLaughlin, Gregory Lang, Joe Bongiorno, Joe Yamada, and David Nevue. Brad Jacobsen was awarded “Christmas Album of the Year” for Midnight Clear by SoloPianoChristmas.com. 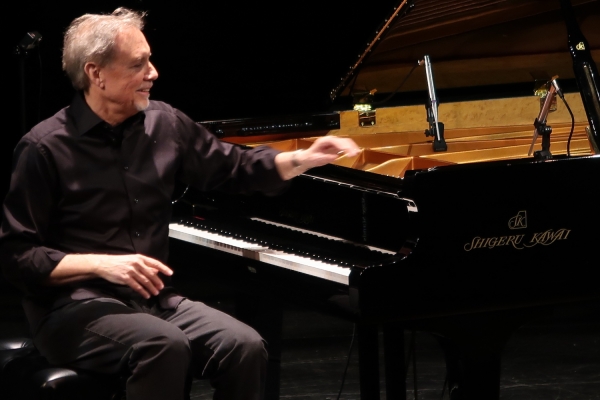 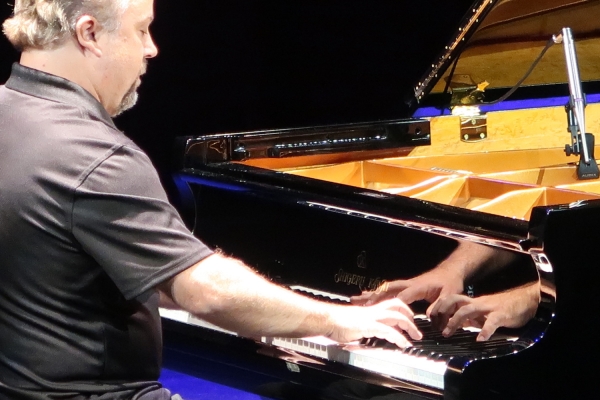 The second half of the concert featured the nominees for Album of the Year. Unfortunately, Masako wasn’t able to fly out from the East Coast, but the other nominees were Louis Landon, Chad Hewitt, Michael Logozar, Ryan Marvell, Sally Kidwell, and Matthew Mayer. Ryan Marvel won for his amazing Reflecting Forward, an album overflowing with emotion and honesty. I had reviewed all of the nominated albums, and they were all winners, but Ryan's was incredible. 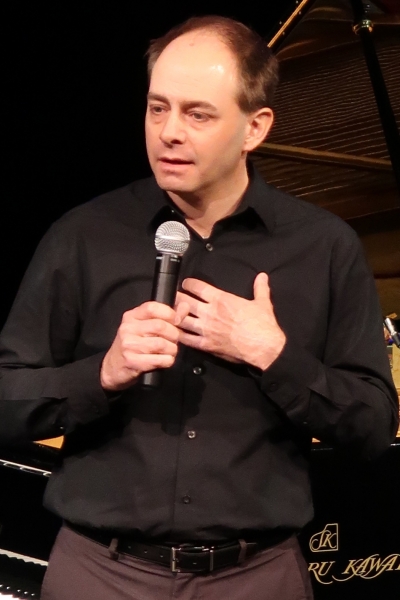 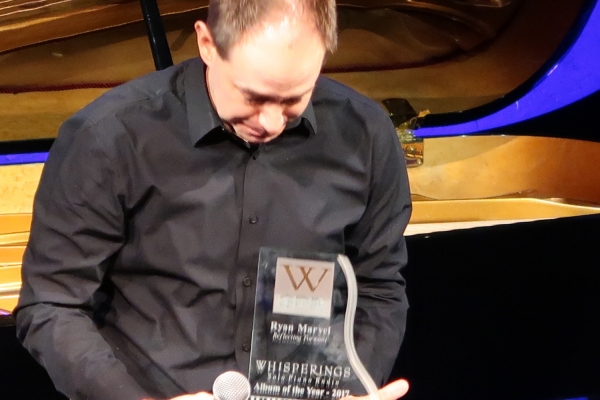 Ryan Marvel with his "Album of the Year" trophy


After the concert, we went back to the hotel for the dinner and more time to visit. It was a truly great and memorable weekend! Here is one more shot from that evening. 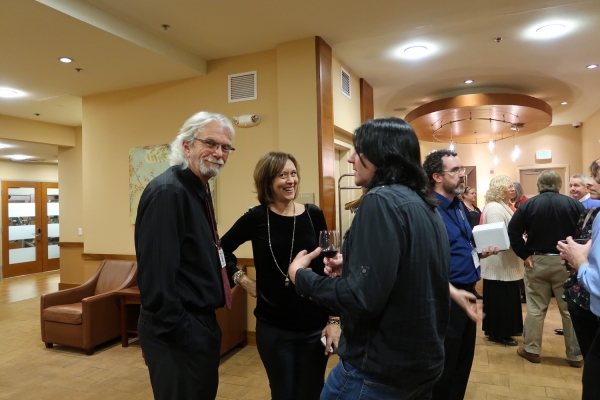 Pete Foster, Christine Brown, Scott D. Davis, and Neil Patton
A law in Boston permits people to serenade in the streets there anytime.

Have you ever wondered why Yankee Doodle stuck a feather in his cap and called it Macaroni? In this case, "macaroni" doesn't refer to pasta, but to a mid-18th century English social club of young men who wanted to bring British influences to the US. The line from the song was originally intended to discredit American Revolutionaries.

"The Star-Spangled Banner" was adopted as the US national anthem by Congress in 1931. Francis Scott Key wrote the lyrics in 1814, taking the melody from an 18th century drinking song called "To Anacreon in Heaven" by British composer John Stafford Smith. (Anacreon was a Greek poet associated with love and wine).
That's it for this issue! Wishing you a wonderful April and lots of great music!