It’s back-to-school time, the time of year when the kids are starting to look sad and their parents are looking much happier! Best wishes to everyone starting a new school year!

This issue will be a little different in that instead of music trivia, I’m using quotations about music. Some are funny, some are profound, and some are just interesting. The dates are either the years the person quoted was living or the year the quote was supposed to have been made. I don’t agree with all of them, but I think they’re all worthy of being passed along. Enjoy!
"The sense of musical delight, with the power of producing it, is a gift of the imagination.” - Samuel Taylor Coleridge (1772-1834)

"There is no law against composing music when one has no ideas whatsoever. The music of Wagner, therefore, is perfectly legal." - The National Parsi, 1850

"The prelude to Tristan and Isolde sounded as if a bomb had fallen into a large music factory and had thrown all the notes into confusion." - The Tribune Berlin 1871

New Reviews: I am simply blown away by the incredible music that is being released this year! I don’t know how I’m ever going to choose a Favorites List for the year! This month’s “Picks” include new music by favorite artists as well as some amazing debuts. Click here to go to the Latest Reviews. I also reviewed one new songbook - Into the Flow by Joseph Akins - and it’s great!
"My music is best understood by children and animals." - Igor Stravinsky

"Music played at weddings always reminds me of the music played for soldiers before they go into battle." - Heinrich Heine (1797-1856)

"People who make music together cannot be enemies, at least not while the music lasts." - Paul Hindemith (1895-1963)

New Interview: I posted a new interview with Michael Bohne, a relatively new artist that I think you’ll enjoy getting to know. Here’s the link.

At the moment, I have three interviews that I’m working on: Peter Calandra, Matthew Mayer, and Adam Andrews. Hopefully I‘ll have those ready to post shortly, so keep checking back.
"If only the whole world could feel the power of harmony."
- Wolfgang Amadeus Mozart (1756-1791)

“I decided that if the papers should so smash me that I could not again appear before the world I would take to interior housepainting; it’s easy to smear a brush across paper, and one is still a son of Apollo.” - Frederic Chopin (Aug. 1829)

"I have let my moustache grow on the right side, and it's quite long. (There's no need for it on the left side, because it's the right that faces the public.)"
- Chopin in a letter to his parents (July 1831)

“Playing the piano is a way of expressing oneself that is perhaps even more fulfilling than writing or speaking.” - Former President Richard M. Nixon (1913-1994)


Up-coming House Concerts: The house concert season is starting to wind down, but we still have three great concerts coming up. On September 16th, pianist/composer Joey Curtin will be here for the first time. The flyer for that concert is here.

On September 30th, The Terra Nova Trio will be here for the first time. They are from Eugene and I believe all three are musicians in the Eugene Symphony. They have a very eclectic playlist, so it should be a great afternoon of ensemble music!

On October 13th, Louis Landon will finish up the season with one of his inimitable solo piano concerts. I can’t wait to see him and Christine again!

“A man responds or fails to respond to certain music by virtue not only of what the music is, but of what he is.” Ernest Newman (1925)

“Music defiles the service of religion.” John of Salisbury c.1160

Milo Graamans’ House Concert: On August 3rd, we welcomed Milo Graamans back for his second concert here. Milo played an incredible variety of music from a Mozart sonata to Scott Joplin to his own originals. His uncle, guitarist Ian Smith, sat in on several pieces, which added even more variety to the program. What a great evening with a couple of incredible local artists! Here are some photos: 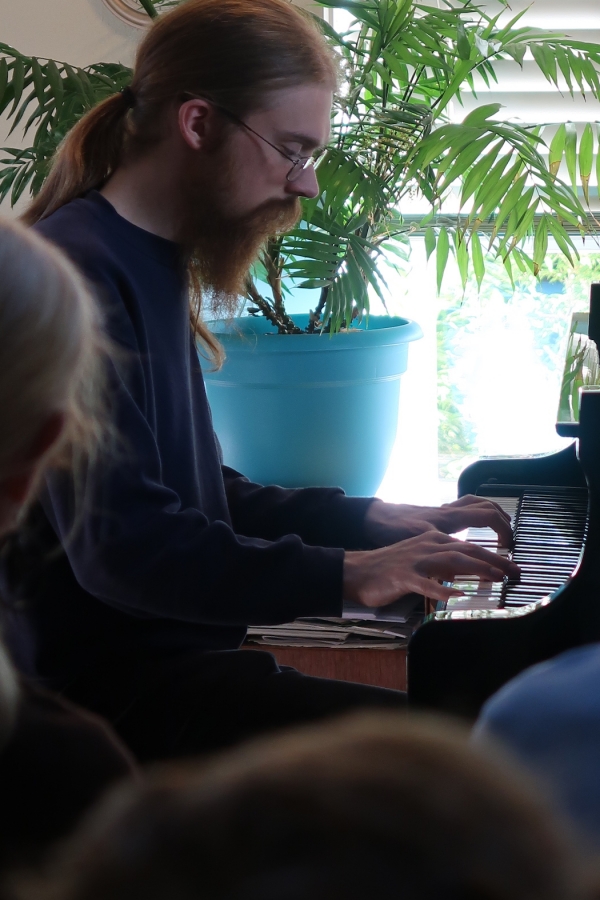 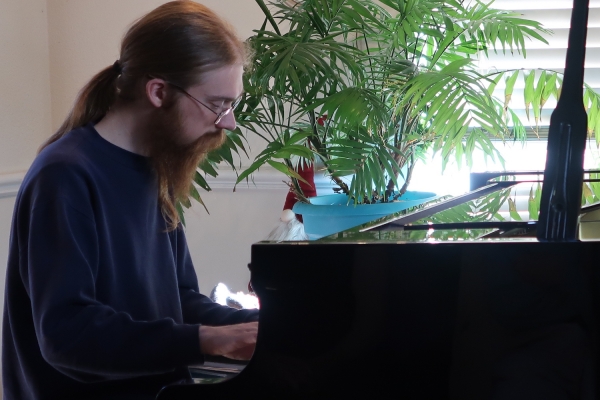 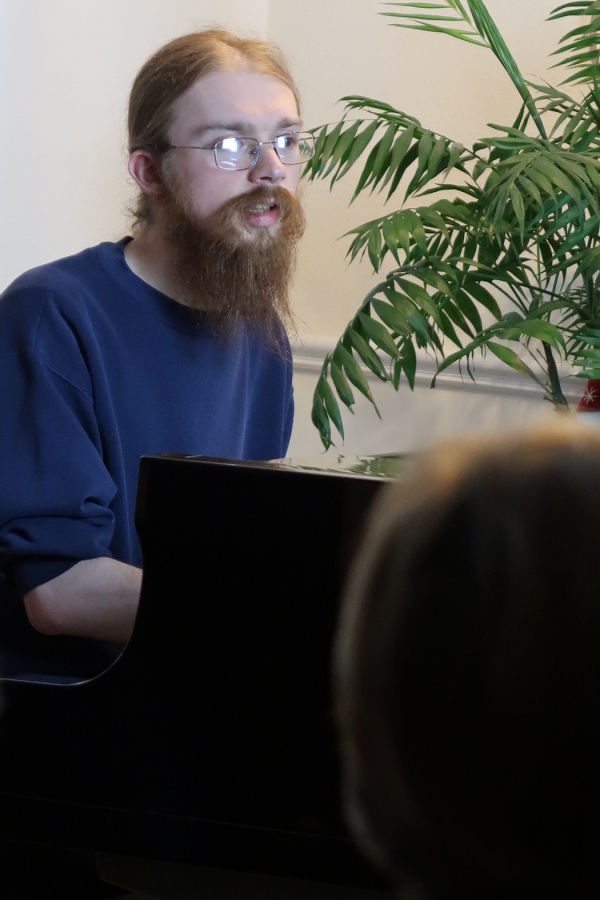 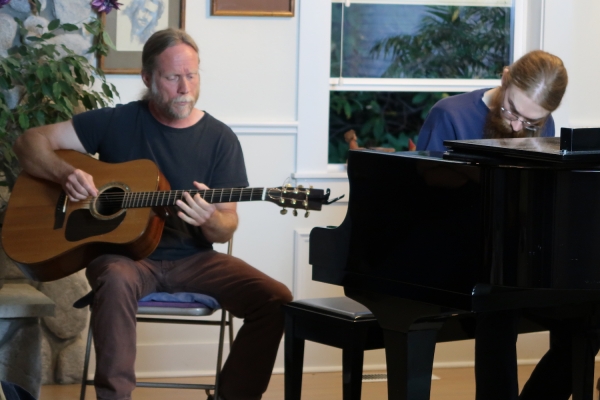 (Referring to Elvis Presley) “A weapon of the American psychological war aimed at infecting a part of the population with a new philosophical outlook of inhumanity ... to destroy anything that is beautiful, in order to prepare for war.”
- East German newspaper c. 1958

Dan Chadburn and Tom Nichols’ Concert Here: On August 18th, Dan Chadburn and Tom Nichols were here for their fifth concert, and these two just keep getting better all the time. Dan opened with an improvisation that set the tone of the evening. The whole concert was inspiring and we raised more than $500 for the Oregon Coast Humane Society. Here are a few photos from that concert: 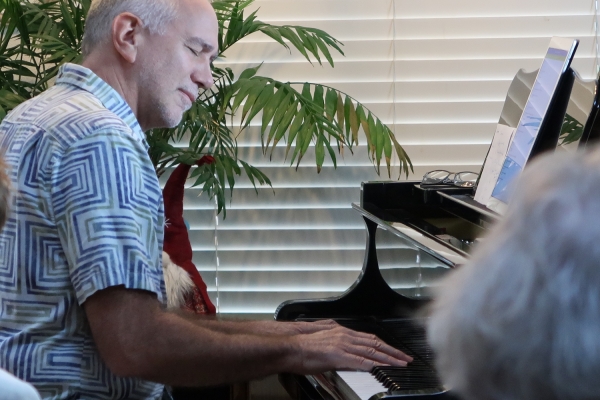 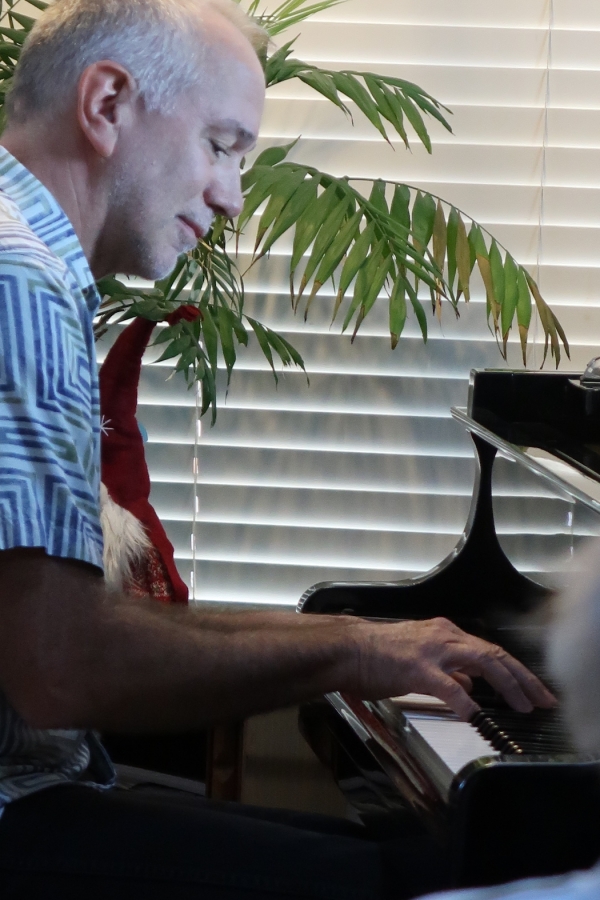 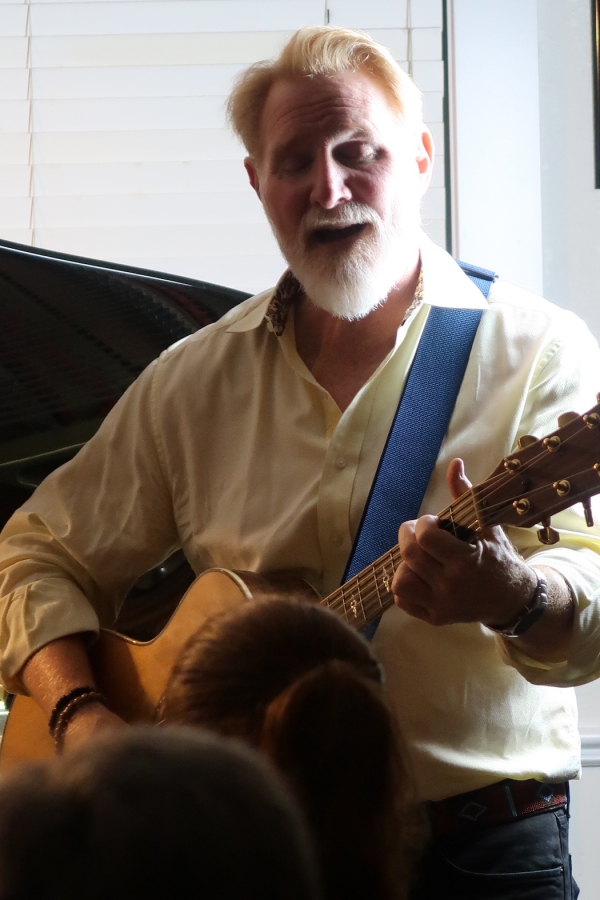 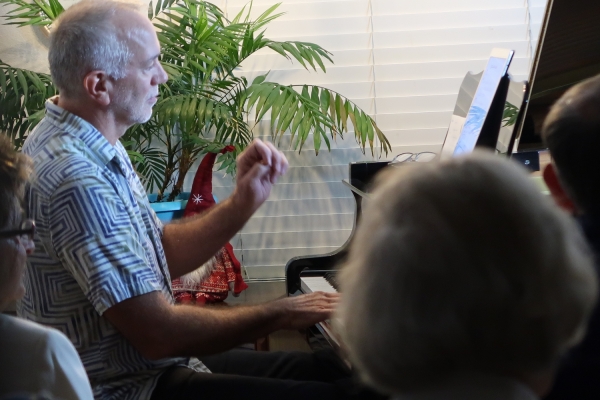 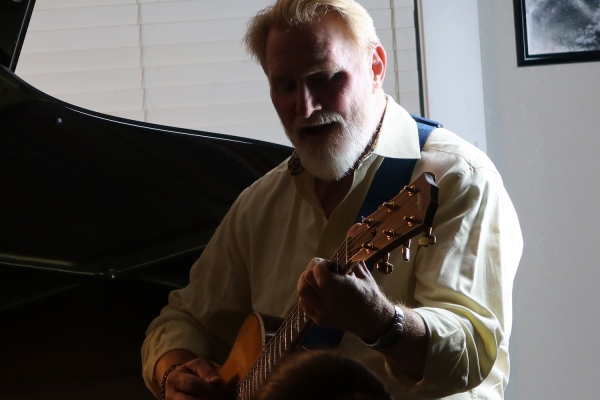 “Music ... is made particularly and principally to charm the spirit and the ear, and to enable us to pass our lives with a little sweetness amidst all the bitterness that we encounter there.” - Marin Mersenne (1636)

“I am ... terrified at the thought that so much hideous and bad music will be put on records forever.” - Arthur Sullivan, recorded on a “phonogram” for Thomas Edison in 1888

“I believe one shouldn’t be too comfortable when listening to really great music ... You can’t enjoy and understand it merely by sitting still and letting it soak into your ears.”
- Sergei Rachmaninoff (1873-1943)

Jim Chappell’s Concert Here: Our third house concert for August was with Jim Chappell, one of the artists who helped launch the new age and smooth jazz genres. One couple came from WA and another couple drove down from Salem to see Jim play live (it was a first for me, too, although Jim and I did an interview back in 1997) and Jim did not disappoint! Hopefully he’ll become a concert regular now that he is touring again. It was great to finally meet Jim and get to know him! Here are some photos from that evening: 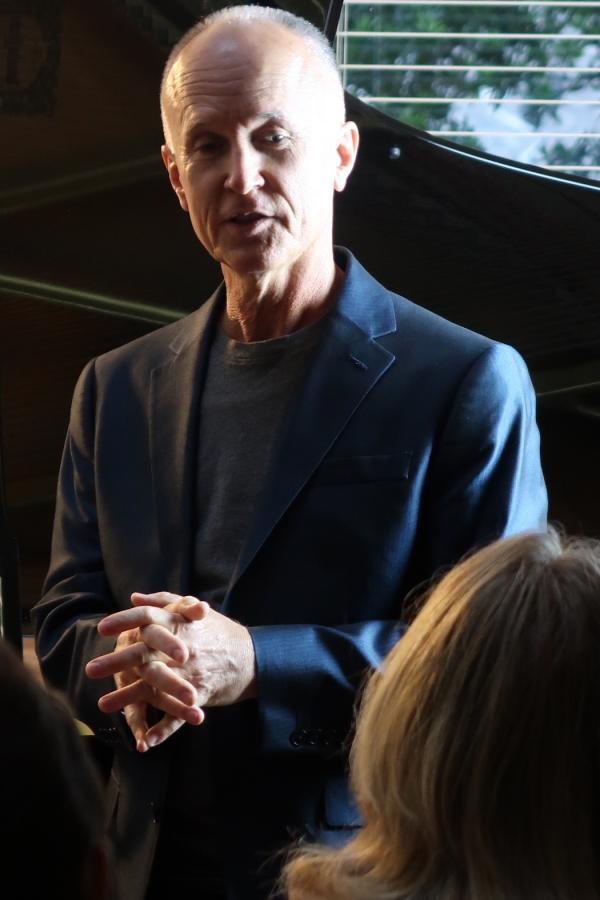 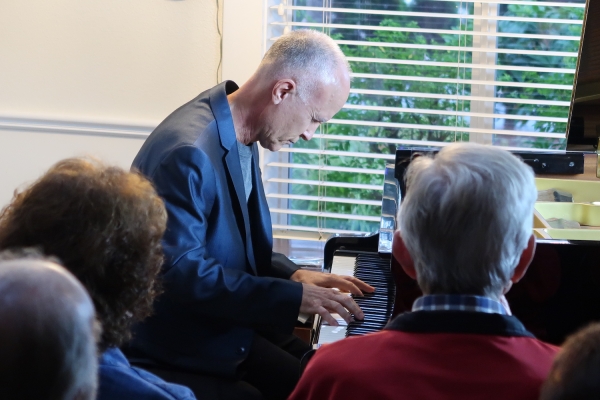 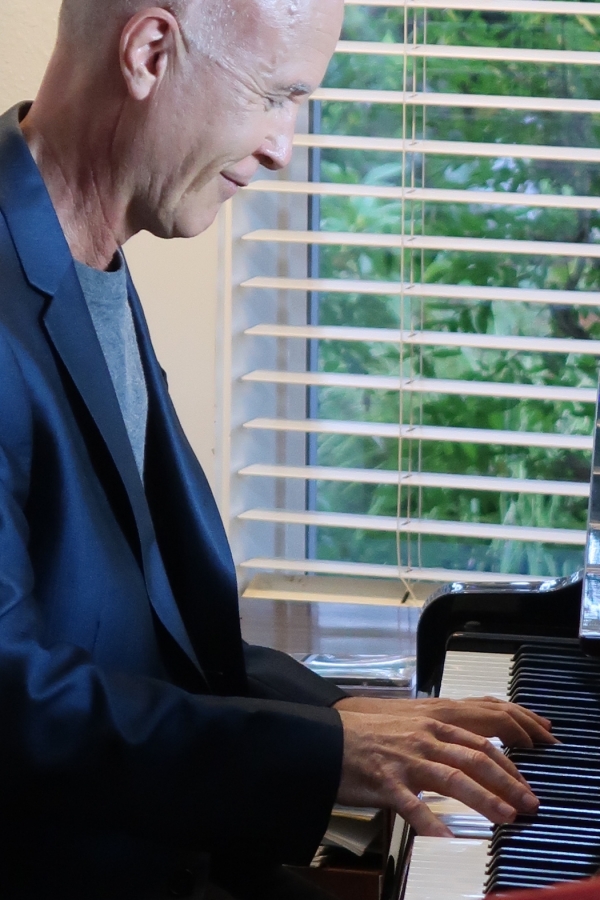 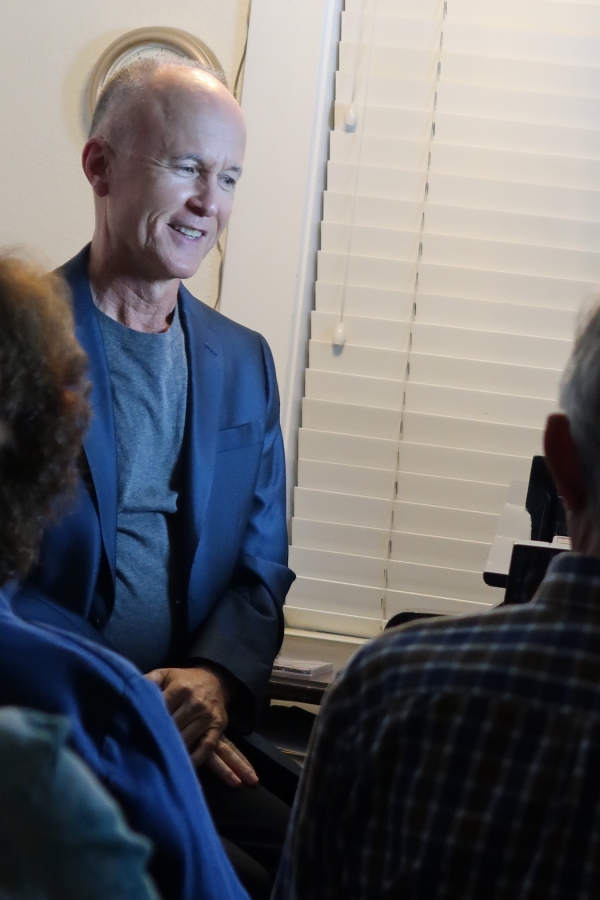 “At no time has any art been so mistreated as is now our beloved music. Let us hope that somewhere in obscurity something better is emerging, for otherwise our epoch would go down in the annals of art as a pit for trash.” - Johannes Brahms 1859

“The notes I handle no better than many pianists. But the pauses between the notes - ah, that is where the art resides.” - Artur Schnabel 1958

“Stravinsky’s symphony for wind instruments was written in memory of Debussy; if my own memories of a friend were as painful as Stravinsky’s seem to be, I would try to forget him.” - Ernest Newman 1971

September Birthdays: We have quite a list of musical birthdays coming up!

Happy Birthday to all of you!!!
“The metronome has no value ... for I myself have never believed that my blood and a mechanical instrument go well together.” - Johannes Brahms 1880

“My previous instructors had usually managed to create the impression that composing music was a risky procedure because you were really in competition with Beethoven and Brahms, and you’d better look out. Well, she (Nadia Boulanger) had no such attitude. For her, writing music was like writing a letter, it’s a function of the musical mind, and in that way she put me at ease in front of the music paper, so that I wasn’t writing Beethoven’s music, I was writing my own, and my own was perfectly modest and perfectly immodest, like anybody else’s.” - Virgil Thomson (1896-1989)

“Certainly ‘jazz’ takes up a goodly share of the American’s time – too much, to my way of thinking. ‘Jazz’, like the well-known little girl with the curl, when it is good is very, very good, and when it is bad, it is horrid. The greater part of it is very bad. Its popularity is the result of the avowed tastes of those people who care only for music which is strongly rhythmical...And this wonderful art will, I am positive, some day disappear – when the dancer tires of it – unwept, unhonored, and unsung. It is raging now, to be sure, and has a considerable following, but does not truly represent America to the world; it does reflect a certain phase of the world’s life (not America’s alone) since it employs primitive rhythms which excite the basic human impulses. It will endure just as long as people hear it with their feet instead of their brains!”
- John Philip Sousa (1854-1932)

“Well, I’ve been saying this all my life, but it’s true: The grass may look greener on the other side, but it’s just as hard to cut.” - Little Richard (b. 1932)
I wanted to share a photo I ran across fairly recently. This was one of the proudest days of my life - especially as a piano teacher. To raise funds for an evangelical concert tour he was going on, my student, Gregory Kwok, performed a solo piano concert in Hercules, CA in about 1996. He gave me this beautiful bouquet of flowers at the end of the concert - a moment I’ll never forget. And yes, Gregory still plays - a lot! Gregory started lessons with me when he was six and took lessons for about ten years, as did his sister, Lena. A very happy memory! 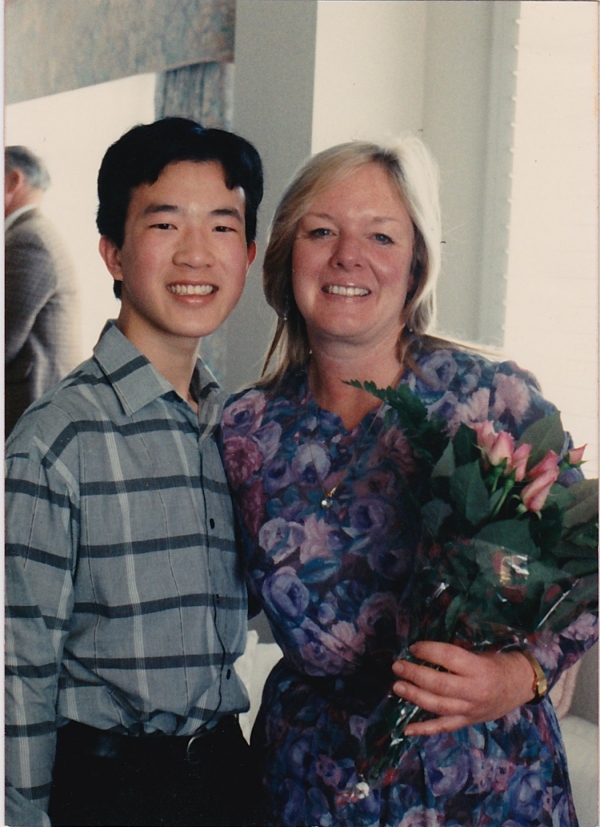 Have a great month, everyone!