Here we go into fall, and I promise that nothing in this issue of Pianotes contains anything even remotely flavored with pumpkin spice! There are some “spooktacular” photos from the September concerts, but that’s all of the Halloween I’m going to do! Enjoy!
Early pianos had 54 keys, while today's piano has 88. There are several piano makers who add additional keys to give their most expensive pianos more resonance.(Stuart and Sons in Australia has 102-key and 97-key grands, and some Bosendorfer pianos also add keys to the bass.)

The first performances of piano solos in concert were by J.C. Bach (one of J.S.Bach’s sons) in London, and Henry Walsh in Dublin, Ireland in 1762.
New Reviews: Mike Debbage and I wrote quite a few CD and single reviews in September, and I also reviewed Michele McLaughlin’s new songbook and an Hourly History biography of Jimi Hendrix. You can find them all right here!
One of the earliest recordings of a piano performance was by Johannes Brahms playing one of his Hungarian Dances.

In the 1920's, before the radio became the main source of entertainment in American households, and long before television, there were more player pianos in the US than regular ones.

New Interviews: Last month I interviewed two fascinating composers who participated in an amazing multi-media event at Lincoln Center in NYC called “Women Warriors: Voices of Change.” I had been asked to help publicize the event on MainlyPiano.com and since I knew two of the women involved, Starr Parodi and Penka Kouneva, I offered to interview them. Both are very candid interviews and will open a lot of eyes about their triumphs and struggles. Did you know that there have been more women astronauts than women working in film music? I honestly think these are two of the best interviews I’ve ever done. Starr’s interview is here and Penka’s is here.

Here, too, is the link to the "Women Warriors" podcasts on Crossover Media.
In 1866, a piano was patented that turned into a couch and had closets for bed clothes and a wash basin. The stool converted to a workbox, looking glass, desk, and a small set of drawers.

Vladimir de Pachmann, a piano virtuoso of the late 19th and early 20th centuries, claimed that milking cows was the best finger exercise there was.

Until about 1750, the thumb was rarely used in keyboard playing. It was supposed to "hang loosely" below the keys. Movement around the keyboard was accomplished by crossing the 4th finger over the 5th, and the 3rd over the 4th or 2nd which is now considered to be poor form.

Last Three House Concerts of the Year: The MainlyPiano Concert Series is rapidly winding down for the year, but we still have three exceptional concerts coming up! Louis Landon will be with us on Saturday, October 12; Scott Cossu returns with guitarist Giles Arendt on Friday, October 25; and William Ogmundson, an incredibly versatile composer and performer, will have his first Florence concert here on Monday November 4th. All three concerts will start at 7:00 PM. You can find the info here.
In the 1850's, Joseph P. Hales started the practice of making cheap pianos and stenciling any name the distributors wanted on them. These are still referred to as “stencil brands.”

Louis Colaiannia’s Concert: Louis Colaiannia returned for a MainlyPiano.com house concert on 9/13, and I think it was his best concert here yet. He featured several pieces from his upcoming album, due for release in early January. He also played music that was actually inspired by and composed in Florence a few years ago. It was a great evening of music and stories! Here are some photos: 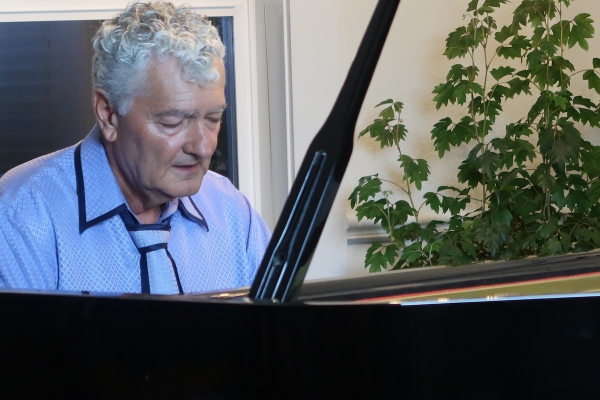 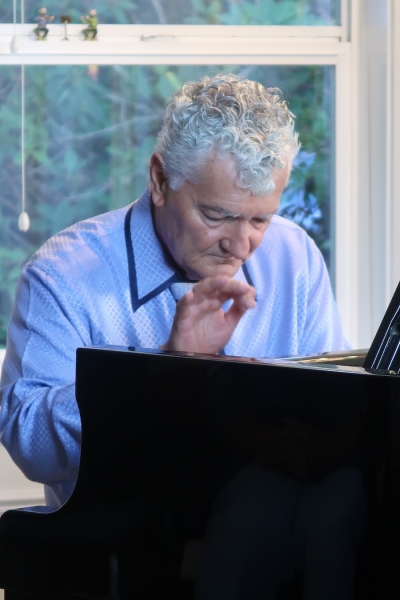 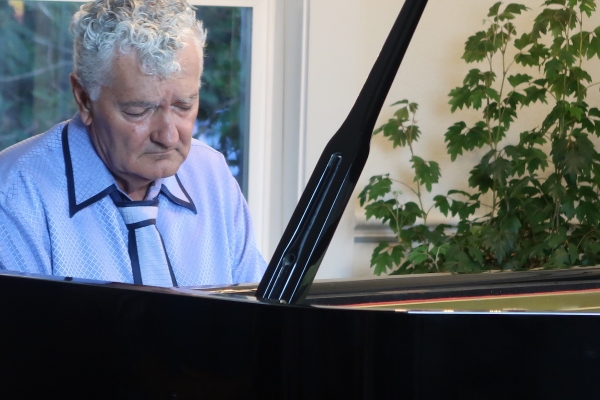 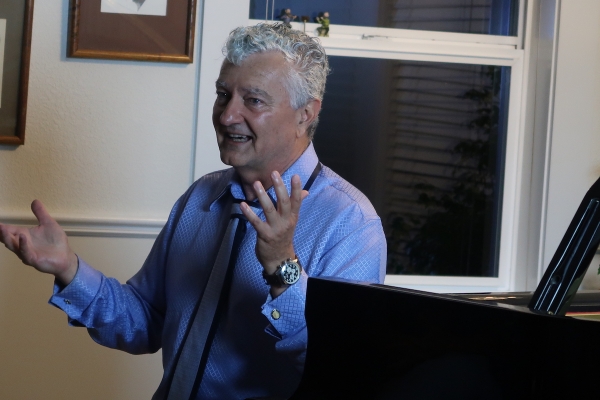 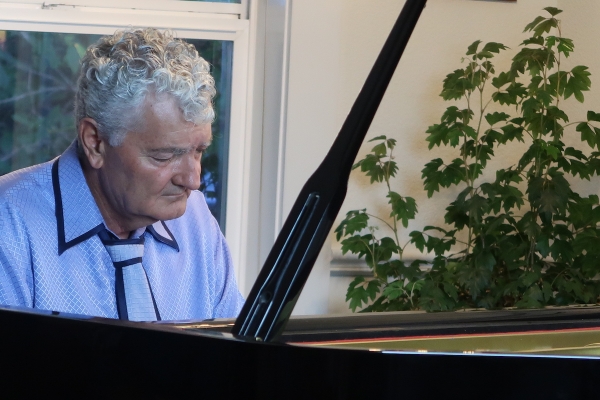 A recording of a Bach prelude played by pianist Glenn Gould was placed onboard the Explorer mission to prove the existence of intelligent life on earth.

It is possible that the distinctive and powerful tone of Steinway pianos is due to the fact that Steinway and his sons all had hearing problems. They might have been designing pianos that they could hear.

Neil Patton and Jeff Bjorck’s Concert: Oregon’s own Neil Patton headlined a concert here on September 28th with special guest Jeff Bjorck. Jeff and I have been friends for about 22 years, and he had vowed that his first house concert performance would be here. I’m so glad we were able to make that happen! Neil is from Eugene and is one of the best pianist/composers around. Seeing and hearing him play live is always such a treat! Fellow Whisperings artist, Christopher Boscole, was here from Hawaii and decided to come for the concert, too. Thanks so much for the concert tuning, Chris!! Here are some photos from that concert. The first one is of Neil warming up earlier in the afternoon. I really like this one! 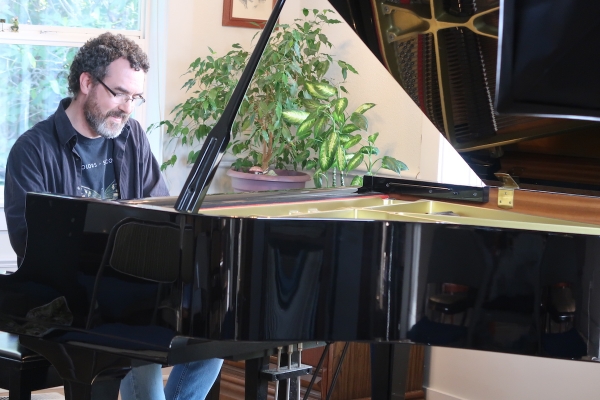 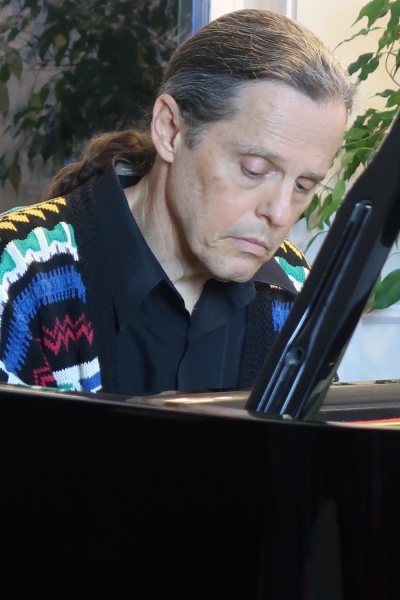 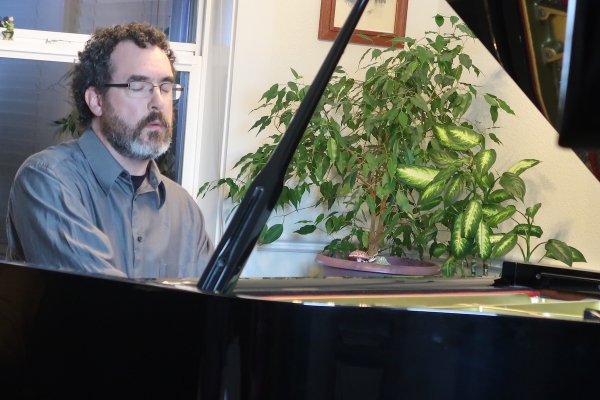 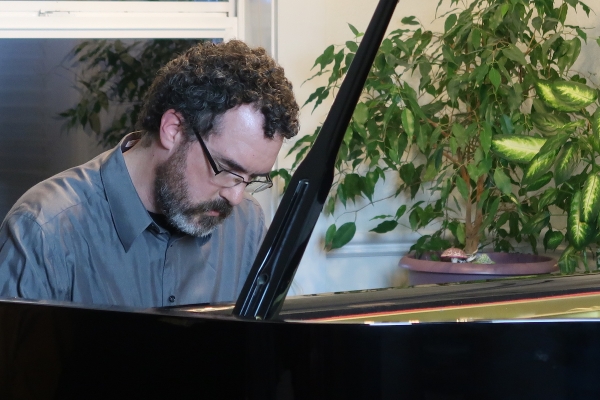 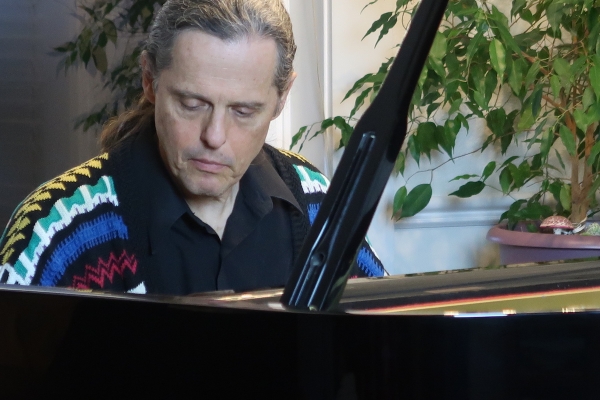 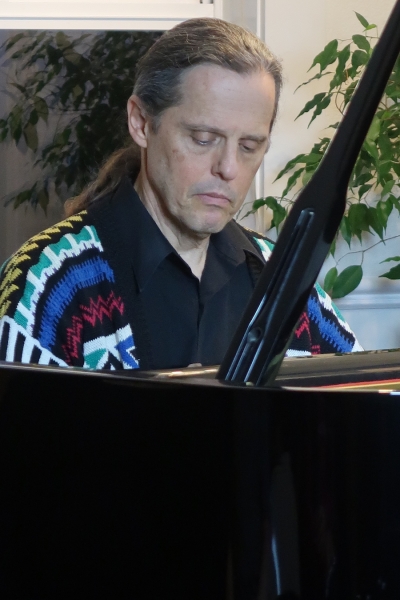 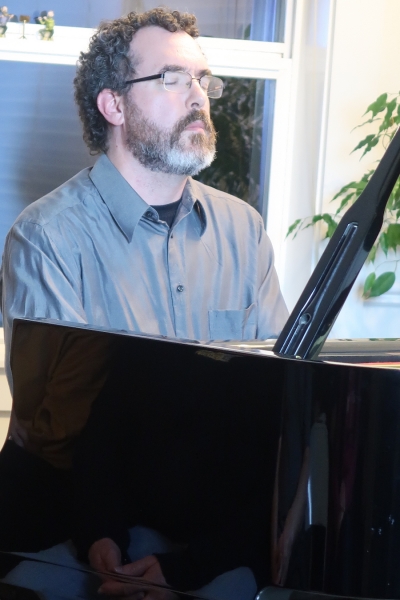 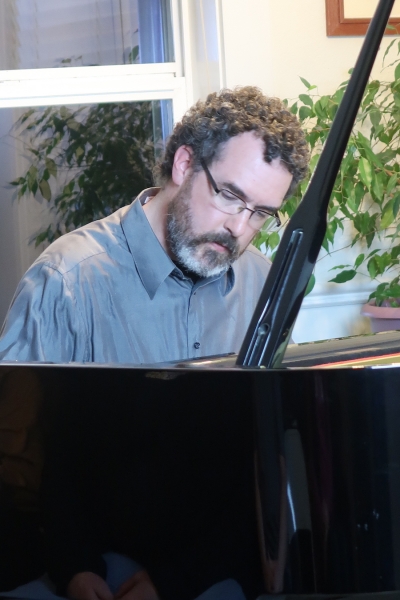 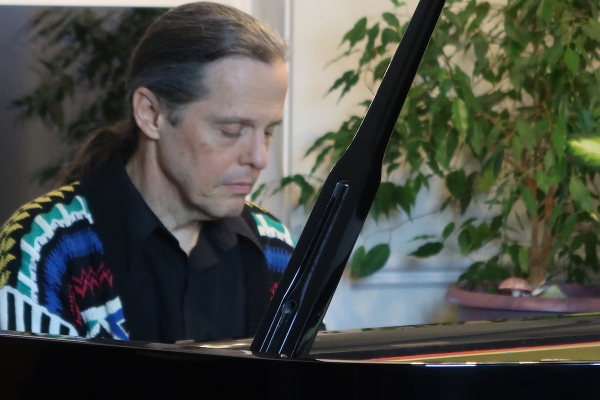 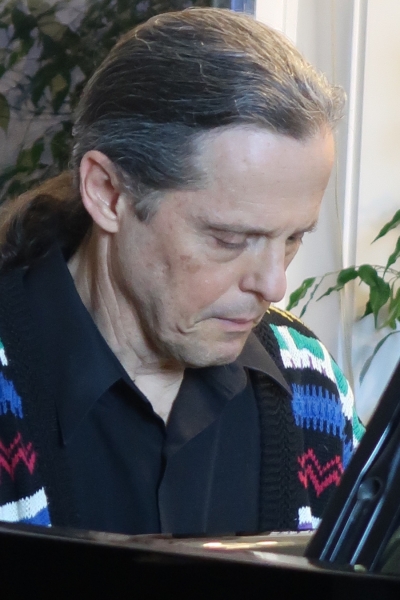 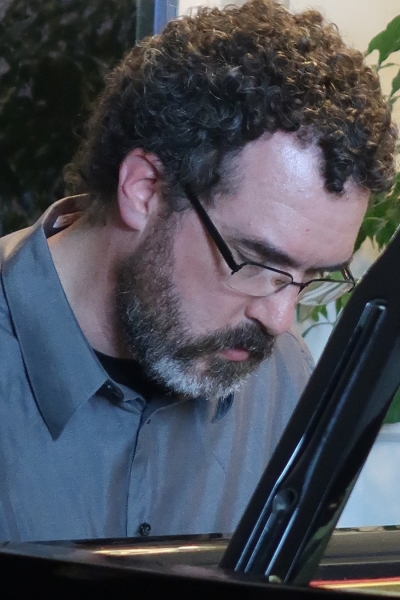 In what is likely the first press interview with a musical instrument-maker, in 1711, Cristofori gave such a detailed description of his invention (the piano) that instrument makers all over Europe could duplicate his work and build their own pianos. The article was translated into German in 1725 and likely inspired pianos to be built in Germany as well.

In London, John Broadwood sold his first square piano in 1780 and his first grands in 1785.

The earliest-known advertisement for a piano was made in 1775 by John Behrent and placed in the Philadelphia newspapers.

October Birthdays: Here is a sampling of some musical October birthdays:

Happy Birthday to all of you!!!

At the Paris Conservatory, separate piano competitions were held for men and women throughout the nineteenth century, with different assigned competition pieces each year. A work that was assigned to the men one year might be assigned to the women the next year. What mattered was that there should never be a direct comparison between women and men students because it was too risky to test the belief that women couldn’t play as well as men.

In the 1880’s, surgeons began performing an operation on pianists in which they severed the tendons between the ring finger and the little finger so that the “liberated” ring finger would be equal in movement to the others.

Wishing everyone a wonderful October - with or without any pumpkin spice, spooktacular savings or prices so low it's scary! (I get really annoyed by those slogans!!!) Until next time...

Kathy
In 19th century Germany, city governments passed ordinances limiting the hours when one could practice the piano.

Franz Liszt (1811-86) “invented” the solo recital in about 1839. He originally called his recitals “musical soliloquies” saying “I do not know what other name to give to this invention of mine.”

Scott Joplin’s opera, “Treemonisha” is the only ragtime opera, and was given its first full production in the 1970’s - long after Joplin’s death in 1917. 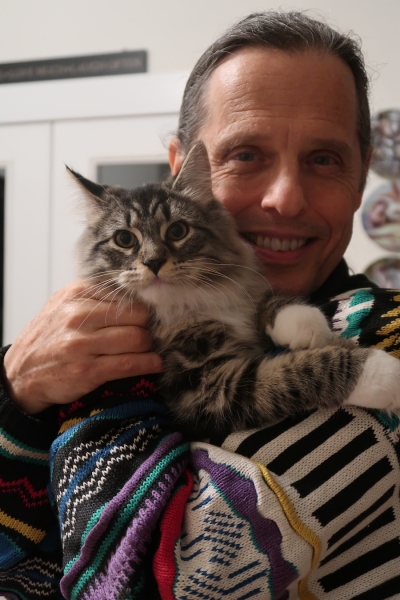 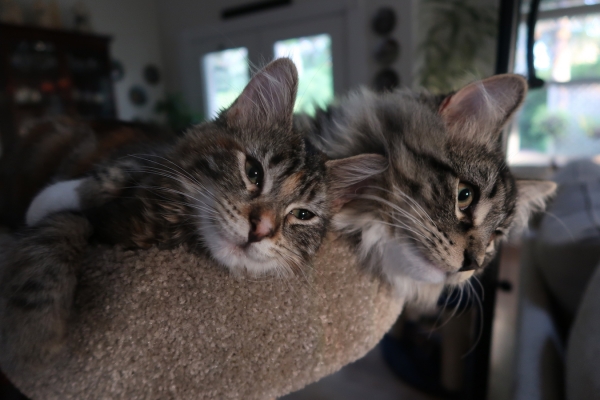