Everyone has been telling me how short this summer has been, so I know I’m not alone feeling that way! Whoosh and then it’s September! August was a busy month, so I have lots of new things for you! Enjoy!
The ancient Romans loved the bagpipe. Emperor Nero is said to have been a bagpipe virtuoso, playing it regularly at public functions. The Romans carried the bagpipe all over the world, but most of the world rejected this musical gift - except the Scots.

American jazz-piano great Jelly-Roll Morton (born Ferdinand La Menthe) had a gold front tooth into which a diamond was set.

New Reviews: There are lots of new reviews again this month including new albums from Craig Urquhart, Paul Avgerinos, Peter Kater and Ryan Marvel! I also reviewed Michele McLaughlin’s newest songbook, Memoirs, and a couple of books. Click here to find links to all of the newest reviews.
Peter Tchaikovsky, composer of The Nutcracker Suite, didn't start to study music seriously until he was 21.

Music has always kept pace with printing technology. The first printed music was the Mainz Psalter in 1457. This was the second book ever made with movable type. Music symbols were cut individually into woodblocks and assembled by hand.

Liberace had a replica of the Sistine ceiling in his bedroom.

New Interview: I did one new interview in August and have several more in the works. The new one is with Michael Stribling, who is releasing an excellent new album, One World, on 9/20/19. Here’s the link to the interview.

I also put a graphic and a link in the “Interviews” section of the MainlyPiano homepage to an exciting podcast called “Women Warriors: The Voices of Change.” It is a twelve-part series that features nine renowned female film composers. There will also be a multimedia concert performed by Orchestra Moderne NYC at New York City’s Alice Tully Hall in Lincoln Center  on September 20th, 2019. That link is here.
French composer Jean-Baptiste Lully's career came to an abrupt end in 1687 when he died of a stubbed toe. Lully always beat out the timing to his music on the floor with a heavy staff. One day, in the middle of conducting a piece for the king, he bashed his toe so severely that he developed gangrene and died at the age of 54.

Jazz was the first musical style to originate in the United States. It was first heard in New Orleans in the late 1800's.

John Cage won $6000 in 1958 for answering questions about mushrooms on an Italian television show.

September Concerts: We have two great house concerts coming up this month! The first will be with Louis Colaiannia on September 13th at 7:00. Louis has been working on a new album, so he’ll have new music as well as older favorites to share with us! Here’s the link to the info.

Later in the month, Neil Patton will be returning - always a favorite concert! Joining Neil will be Jeff Bjorck, who will actually be doing his first house concert performance here! That concert will be on September 28th at 7:00. All of the info is here.
The three cities mentioned most often in song titles are New York, Los Angeles, and New Orleans.

An oldie from 1996: A Ferndale, Michigan group that conducts UFO research has announced that John Tesh is an alien! In a flier distributed by the National Anti-Tesh Action Society, they called Tesh an “interplanetary mole” for an alien delegation called Echelon. The group also staged a rally outside a Detroit theater where Tesh recently performed in concert. Tesh visited the protesters and reportedly asked how they found out he was an alien. (Give him credit for a sense of humor!) The leader of NATAS gave this quote: “He is a bad alien. Through his music and his television show he is filtering the thoughts of unsuspecting viewers through alien mind screens and transmitting deadly thought-probe radiation beams to the world.”
Concert With Michele McLaughlin and Steve Rivera: On August 4th, Michele McLaughlin and Steve Rivera were here as part of their Pacific Northwest Tour. It was a great concert and a lot of fun! Here are some photos: 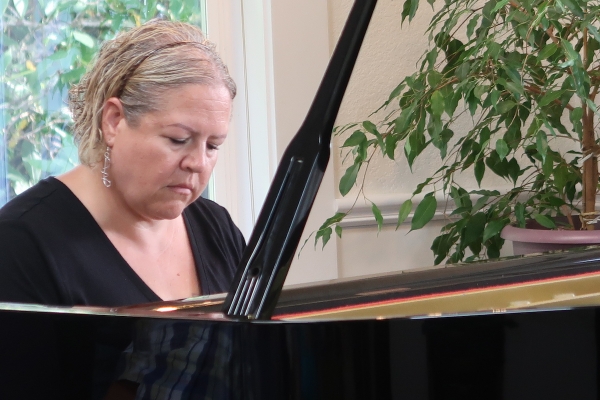 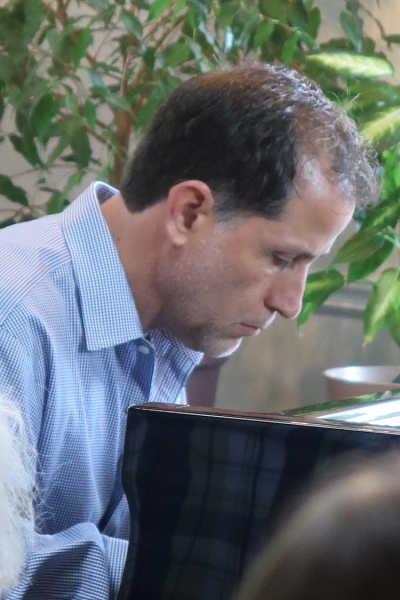 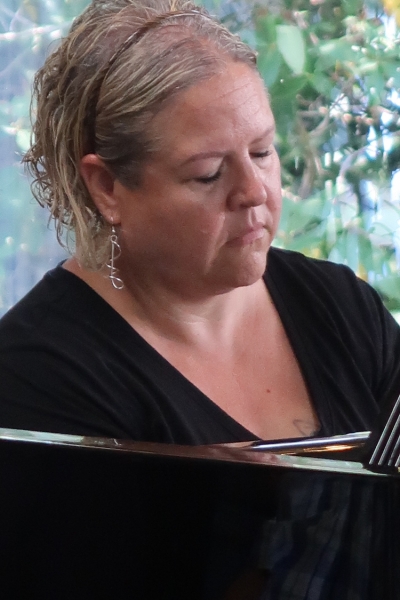 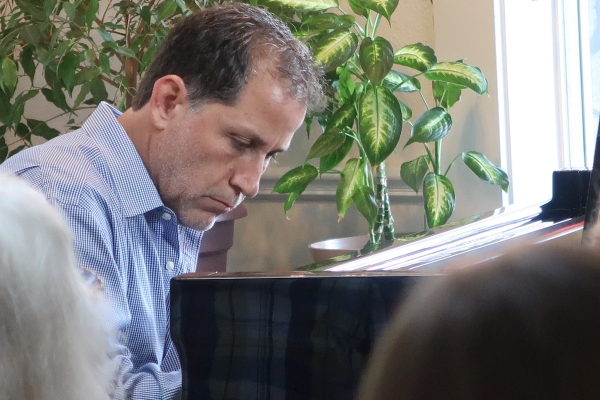 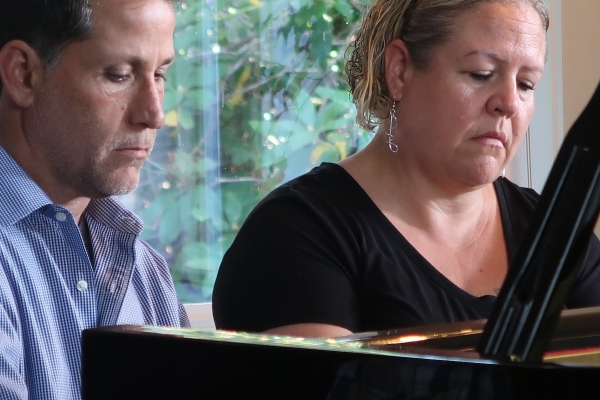 The first stereo records were made in 1933.

The song, “Yankee Doodle” began as a nonsense Dutch song called “Yankee Dudle Doodle Down” in the 15th century. It spread to England as a children’s song before being used to taunt Oliver Cromwell’s Protestants during the English Civil War. Finally, the British turned it on the American colonists in the same taunting vein, not realizing that they’d adopt it proudly.

The day of the week mentioned most often in song titles in Sunday. Saturday and Monday are second and third.
Concert with Dan Chadburn, Tom Nichols and Jenny Chadburn: Once again, Dan Chadburn and Tom Nichols traveled from Virginia to perform a benefit concert for our local Humane Society. The concert was on August 24th and included Dan’s sister, Jenny. Not only was it an incredible concert, but we raised over $1100 and brought in lots of pet food, too. Dan played several pieces from his upcoming new album, due to be released around November 1, as well as other favorites; Tom sang and played guitar (originals and covers); and Jenny sang and played the piano (originals and covers). It was truly a night to remember! Here are some photos. 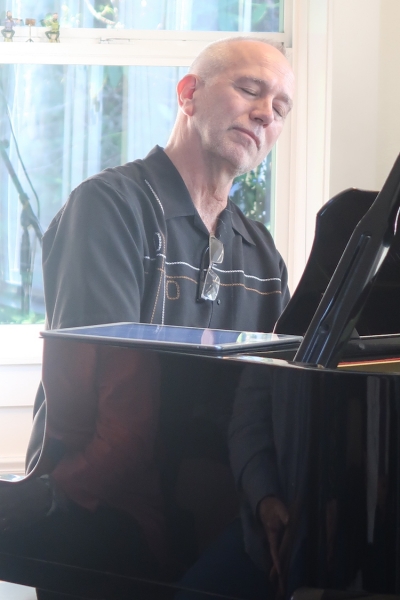 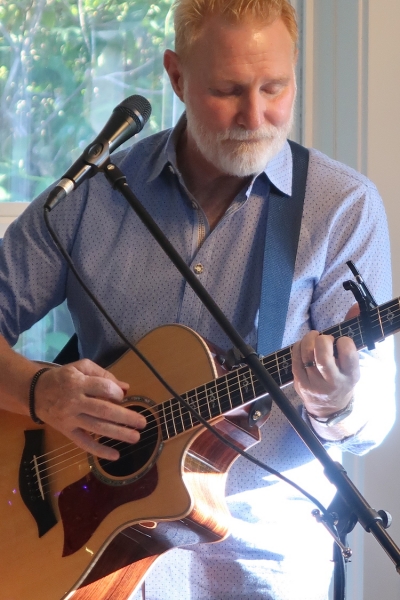 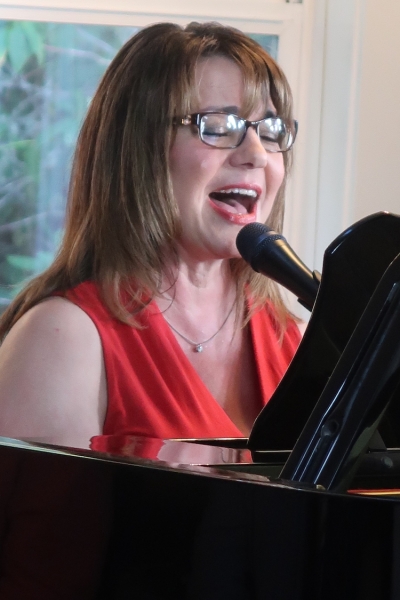 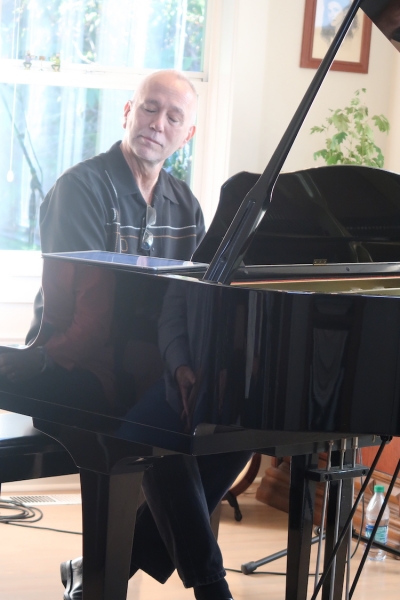 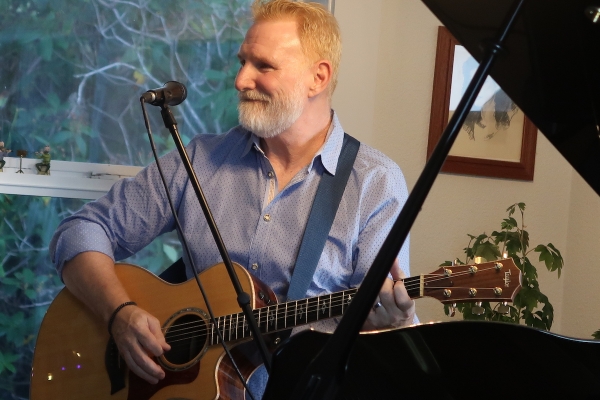 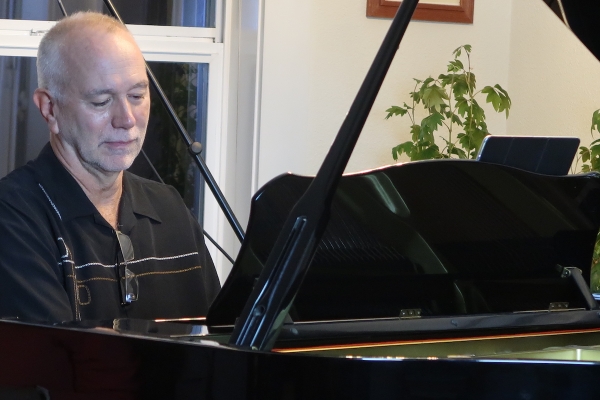 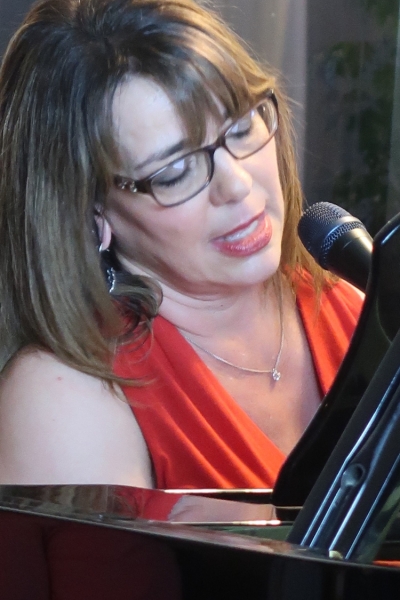 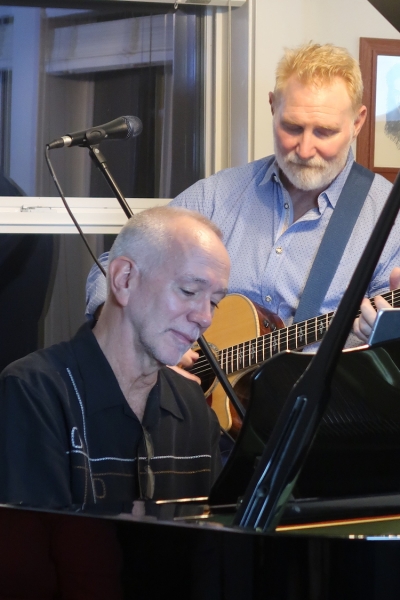 Another interesting oldie from 3/97: Yanni is scheduled to perform two concerts with a 45-piece symphony orchestra on March 20 and 21 - at the Taj Mahal in India! One source on the Internet said that Yanni is financing the concert and the recording of it himself, and then is donating all proceeds to help preserve the Taj Mahal. Another source said that Yanni is being paid $3 million to do the concerts, and the tickets will go for $50-200. According to Internet news sources, the concert will be the first ever at the location, and will commemorate the 50th year of India’s independence. Yanni was invited to perform at the monument by the country’s government, and the event will be shown on world-wide television. A video is planned (“Live at the Acropolis” is the second-best selling music video of all time), and will also include upcoming concerts at China’s Forbidden City and a location in South America. The concert will include selections from Yanni’s upcoming album “In a Closed Room.” To avoid any damage to the Taj Mahal, Yanni has acquired a new sound and light system that was developed by a French nuclear physicist. Anyone want to carpool???

The government of Austria spends more money on the Vienna Opera than on national defense.

Most opera singers have a career of about 25 years. Age thickens the vocal cords, and dries the tissues.
September Birthdays: There are lots of music-related birthdays coming up in September! Here is a sampling:

Happy Birthday to all of you!
Before dropping out of Baylor University in Waco, Texas, Willie Nelson sold Bibles door-to-door, worked as a disc-jockey, and taught Sunday School.

Roy Clark was the first US country artist to perform in Moscow.
I think that brings us up-to-date for now! Best wishes to those returning to school! Below are some photos from the month of August, including one of the two kittens I adopted this summer, Pepper and Penny. Have a great month!

Kathy
Former Louisiana governor Jimmie Davis wrote more than 400 songs, including “You Are My Sunshine.” Elected in 1944 and 1960, Davis is the only governor to be elected to the Country Music Hall of Fame.

Mystery writer Agatha Christie began writing as a hobby. She had actually always wanted to be a musician.

“America (My Country ‘Tis of Thee)” got its melody from Britain’s “God Save the King/Queen.” It is the only major anthem in either country that is played in 3/4 waltz time rather than the more common 4/4 marching rhythm. 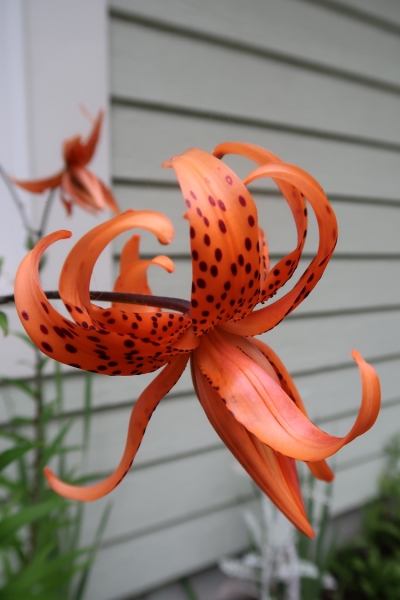 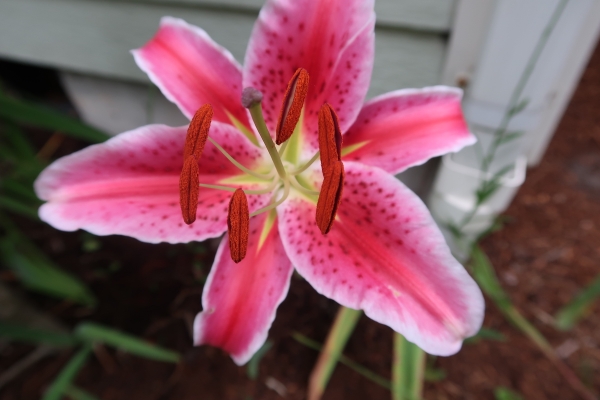 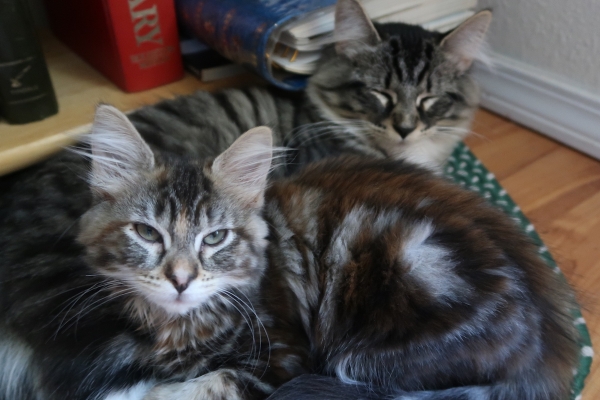 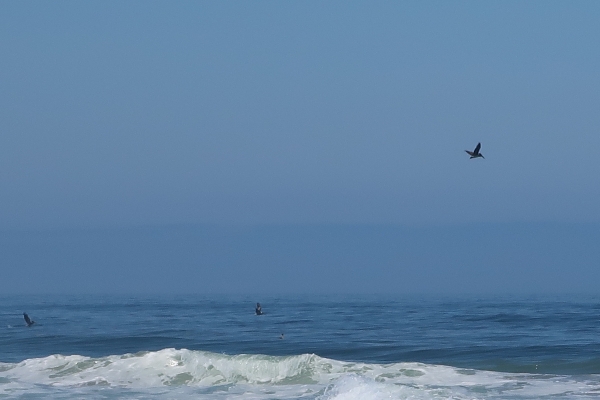