It looks like 2020 is now in full-swing with no signs of slowing down a bit. I hope your 2020 is off to a great start! I have lots of news this month, so let’s get right to it!
The fear of performing is called “topophobia."

Elton John won a piano scholarship to the Royal Academy of Music at the age of 11.
New Reviews: If January is any indication, 2020 will be another great year for new music! I posted reviews of 15 new albums, many of them outstanding! I also reviewed a songbook and two trivia books. You can find links to all of them here.
Piano tuning was a special skill after 1750, and became an occupation in the 1800’s.

Hired pianists provided the "sound" for the silent movies of the early 20th century.

A drop of a half step in a piano's pitch (for example, from C# to C) causes a drop in the total tension on the piano of about 5,000 pounds.
New Interviews: I have three new interviews for you this month (and at least three more in February!). They are with Kate Moody, who will be opening the house concert season on March 1st, Spanish pianist/composer Hugo Selles, and Louis Anthony deLise. I think you’ll enjoy all three of them! Coming up in February will be new interviews with Doug Hammer, Robin Spielberg and Shoshana Michel, all of whom have new albums that we’ll be talking about, so check back often!
George F. Handel composed his great “Messiah” in less than three weeks.

On the average recording of a well-prepared classical musician playing difficult music, there can be as many as 200 to 600 "edit points" (mistakes or flaws) in a sixty-minute program. The producer who has worked with some of the finest musicians in the world (Vladimir Horowitz, Itzak Perlman, etc.) says he has never produced a recording with fewer than 100 "edit points."

House Concert Schedule: I still don’t have all of the dates finalized, but here is what I have on the house concert schedule for 2020:

I have a few other artists to add as soon as I can figure out dates. March and April are definite, though! You can always get the latest info here.

On a good modern piano, a note can be repeated six times per second.

Francis Hopkinson of Philadelphia published his Six Songs for the Harpsichord or Pianoforte in 1787, and claimed to be the first native-born American to produce a musical composition. He dedicated the pieces to George Washington. Hopkinson also designed the original American flag and was one of the signers of the Declaration of Independence.

Clavichords and harpsichords first appeared in Europe at the beginning of the 15th century.

Kate Moody's Concert in Florence: As I mentioned above, pianist/composer Kate Moody will be kicking off our 2020 House Concert Series. Here is the link to her Concert Page. To learn more about Kate and what she plans to play at the concert, please visit the interview we did the end of January.
Little interest was shown for Bartolomeo Cristofori’s original piano, so he went back to making other kinds of stringed instruments. He died in 1731 at the age of 75.

In 2006, the British pianist Stanislav Yovanovitch visited Harbin, a city on the Northeastern spur of China for its annual music festival. During his time there, he joined 1,000 fellow pianists in a massive performance of Schubert's "March Militaire" in the city square. The event set the world record for most pianists playing one piece at the same time. That concert was one of the items the city listed on its resumé (along with being home to the country’s oldest symphony orchestra) to help it win an official recognition as “Music City” from the United Nations.

Mozart and his wife, Constanze, moved eleven times in the nine years they lived in Vienna.

Website Changes: You may have noticed that I haven’t made all of the changes to MainlyPiano.com that I mentioned last month. I’m still not exactly sure what I want to do, so not much has changed as yet. We’ll see how it goes in February. I know the “Pick” status helps artists in promoting their music, so I might just leave that alone for now. Decisions, decisions!
Bartolomeo Cristofori (credited with inventing the piano) sold a few of his pianos to the King of Portugal.

At the end of the eighteenth century, when the piano was clearly driving the harpsichord into oblivion, the title pages of keyboard music regularly stated that the works were suitable for either piano or harpsichord.

Cristofori’s pianos had an una corde stop that was a knob on the cheek of the keyboard that moved the entire keyboard sideways so that the hammers would strike only one of the two strings for each note. (The una corde [soft] pedal came later.)

February Birthdays: Here is a partial list of some of the musical birthdays coming up in February:

Happy Birthday to all of you!!!
In 1798, Muzio Clementi invested enough of his earnings from performing piano concerts, composing for the piano, and teaching the piano to become a partner with John Longman in a company that made pianos and published music, largely for the piano. Clementi is said to have helped to design the pianos that bore his name.

The 1870s to the 1920s were the heyday of the piano in Western musical culture. By 1870, production of pianos had grown to about 85,000 instruments a year in the four leading piano-producing nations - Great Britain, The US, France, and Germany. After that, the numbers increased constantly, and by 1910, piano production had reached almost 600,000 instruments a year in those four countries alone.

Yamaha pianos were awarded honorary grand prizes at world expositions in St. Louis and Seattle in 1904 and 1909, respectively.
I didn't take many photos in January - too gray and rainy! So, I'll leave you with a few more trivia tidbits and the two latest photos of Pepper and Penny - this time hanging out on my piano. Have a great month!

Kathy
Camille Saint-Saens (1835-1921) was the earliest-born pianist to record his music.

Jerry Lee Lewis was the first to bring rock’n’roll piano to millions in the 1950’s.

The best-selling pianos in the world are made by The Pearl River Piano Group in China. They also claim to have the largest piano factory in the world. The company was established in 1956 in Guangzhou, Guangdong, China. Pearl River is capable of producing over 125,000 pianos a year, and exports them to more than 100 countries. Most Pearl River pianos are considered entry level instruments. However, they make some (Ritmuller, Kayserburg, and Hallet Davis) to higher specifications with better materials. Pearl River pianos are mostly sold under the Ritmüller brand name for the US and European markets. 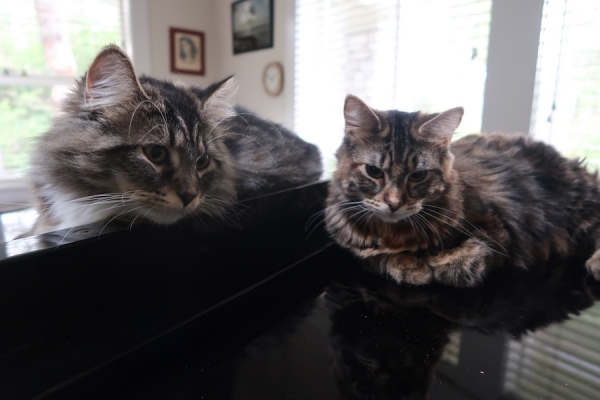 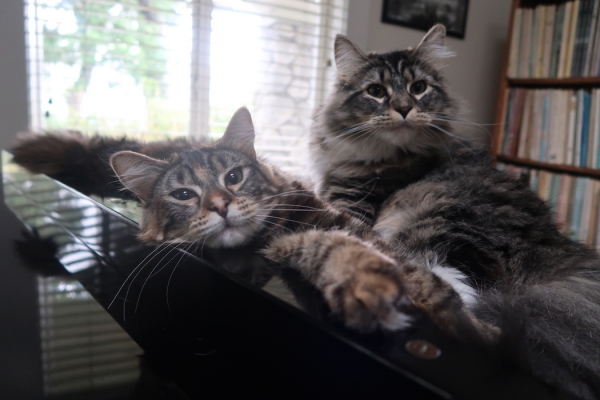