Welcome to the March issue of Pianotes - ALREADY! February is always a shorter month, but even with the extra day, it went much too quickly! We got quite a bit done, though, so there is lots of new material to read this month. Enjoy!

Chopin’s “Minute Waltz” was actually written for George Sand’s dog. Sand was amused by watching her dog chasing its tail and asked Chopin to set it to music. He did, and the piece is subtitled “The Waltz of the Little Dog.”

Franz Josef Haydn believed he could not compose well unless he was wearing a ring given to him by Frederick the Great.

New Reviews: I posted thirteen new reviews of recordings in February, including the full seven-disc set of Ludovico Einaudi’s Seven Days Walking. I also reviewed Shoshana Michel's new songbook for her Impressions album. You can find them all here.
GF Handel composed his “Royal Fireworks Music” to accompany a fireworks display presented by King George I. A fire broke out in the fireworks box, causing all of the fireworks to explode at once. In the chaos that followed, the musicians were unable to finish playing their music.

Mozart wrote his opera, “Don Giovanni,” in one sitting.
New Interviews: We did three new interviews in February! They are with Doug Hammer (x2!!!), Robin Spielberg and Eric Tingstad - all quite different from each other! I plan to have one or two more interviews for you in March! Enjoy!
The first time a so-called “psychedelic” light show was coordinated with a live performance of music was the world premiere of Alexander Scriabin’s “Poem of Ecstasy” in New York in 1908. Colored lights were reflected on a screen behind the piano in the huge orchestra.

Franz Liszt was the inventor of the modern recital and was the first musician to give a concert without assistance from other artists.

The Van Cliburn piano competition in Fort Worth, Texas, is one of the biggest and most important piano competitions in the world. In May 1993, Italian pianist, Fabio Bidini, was ready to perform his 75-minute recital for the semi-final round when his page-turner was nowhere to be found. An emergency replacement was enlisted who was not familiar with the music and who left her reading glasses at home! The results were disastrous. In several places, Bidini was forced to turn the pages himself, and at others, the replacement turned too soon, making Bidini play from memory. As much as I sympathize with Mr. Bidini, it must have been hysterical to watch! He was given a second chance to play the work the following day.
March House Concerts: We’re kicking off the 2020 MainlyPiano.com House Concerts Series this Sunday, March 1, with pianist/composer Kate Moody! This will be Kate’s first concert here, and I can’t wait to hear her play live! Here is the link to the info.

On March 22nd, we’ll welcome back guitarist/composer Eric Tingstad. Eric has had a long and inspiring career in music and last played here in 2015. The info for Eric’s concert is here.
When Mozart was 14, Pope Clement XIV awarded the young composer the gold cross of the Order of the Golden Spur. This made him Sir Wolfgang Signor Cavaliere Mozart.

Although the early piano had fifty-four keys compared to the modern piano’s eighty-eight, it had all the other essentials - wire strings, keys, hammers, dampers and escapement.

Charles-Henri Valentin Alkan (1813-1888) (real name Morhange) was a French eccentric who composed almost all of his music for the piano. His death occurred at the age of 74 in his Paris home. He was reaching for a copy of the Talmud on a high shelf of Jewish religious books, and the entire bookcase fell and crushed him.

House Concert Schedule for 2020: I have the calendar for this year’s house concerts almost finished. I may or may not add another one in the fall - we’ll see! Here is what we have:

All of the concerts are at 7:00 PM except the two March concerts, which are Sunday afternoons at 3:00. The suggested donation is $20 at the door. You can always find the latest updates here.

Van Cliburn won an international piano competition in Russia in 1958 and became a national hero. His recording of the Tchaikovsky Piano Concerto topped the pop album charts for seven weeks!

Wigs were popular in Mozart's time because people didn't believe in washing their hair. They put on wigs to cover their own hair and used powders to disguise the smells and dirt.

The flashy Hungarian pianist Balazs Havasi, is known for pushing limits. He has produced crossover albums with pop stars, spoken at TED conferences, and on November 29, 2009 attempted to set the world record for the fastest fingers on a keyboard. The nimble pianist was able to play a single note 498 times in one minute (that’s faster than eight times per second) to capture the record for most key hits in 60 seconds. I can't imagine having to listen to him practice!

March Birthdays: March is another popular birthday month! Some of the wonderful people who will be blowing out their candles include:

In mythology, there were nine Muses who were supposed to be the daughters of Zeus and Mnemosyne. Each Muse represented one of the arts. There were three who represented music. They were Euterpe, who was the general muse of music; Polyhymnia, who was the muse of sacred poetry and hymns; and Terpsichore, the muse of choral song and dance.

People of Beethoven's time often paid composers to dedicate pieces of music to them.

The piano stool that changes height when spun appeared by the end of the eighteenth century and can be considered an important landmark in the ergonomic design of furniture. If anything, it is too well adapted to children, who have always preferred spinning to practicing!
Wishing everyone a wonderful and HEALTHY March!

Kathy
The statue in Vienna that was built to honor Franz Schubert cost more than Schubert earned for his music during his lifetime.

On August 29, 1952, John Cage's piece "4'33"" was given its first performance by his friend, David Tudor. It was first performed on the piano, although it was intended for any instrument or group. The performer sits in silence for four minutes and 33 seconds.

In his too short life (he died at 31), Franz Schubert composed a remarkable amount of music. He wrote 9 symphonies, 19 string quartets, 10 operas, numerous piano sonatas, chamber music of all kinds, and more than 600 songs. He is probably the only composer who could match Mozart's composing speed.


I didn't take any non-cat photos in February, but things are starting to bloom, so I hope to have some fresh subject matter for you next month! 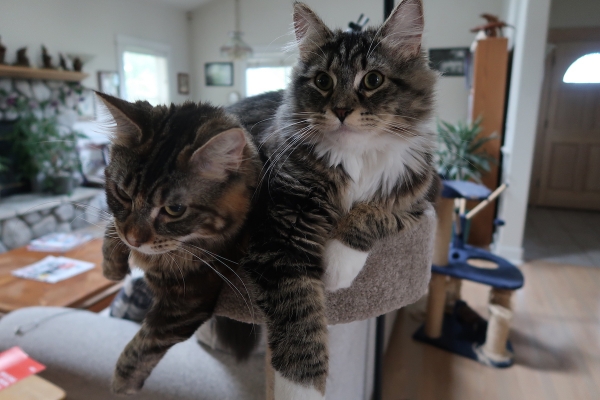 Penny and Pepper "sharing" their cat furniture. I think Penny is getting squished! 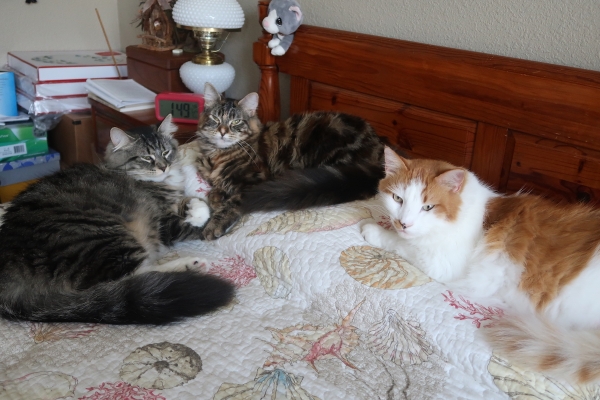