Whew! And then June was over! I hope everyone is doing well and enjoying the summer so far. Several people contacted me to find out if we were doing okay in the heat wave in the Pacific Northwest. Fortunately, being right on the coast, it wasn't/ isn't bad here - the low 80's was about as hot as it got in Florence, OR. It actually rained a little bit this morning (6/30) when I was out walking, so all is well here!


The first American piano builder was John Behrent of Philadelphia. He built his first piano in 1775.

The first "baby" grand piano was built in about 1860 by Henry Lindeman. He called it a "cycloid" piano. It was Steinway who began calling his smaller grands “babies."

The piano is the only instrument ever made whose physical appearance is often more important to the owner than its musical qualities.

New Reviews: We have a really eclectic collection of new reviews of recordings this month! Classical, children's, handbells, guitar, solo piano, jazz, flute, and on it goes. Something for everyone! I've also started reviewing sheet music, not just songbooks, so that section of the homepage is now called "Songbooks, Sheet Music and Other Reviews." You can find all that and more here.
The Wheeler and Wilson Co. of Connecticut experimented with a combination sewing machine and miniature organ. A woman was supposed to be able to sew and play music at the same time. 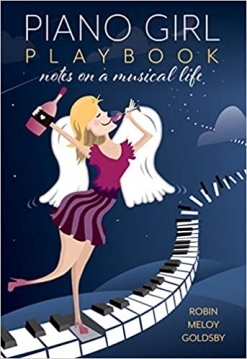 Piano Girl Playbook: Robin Meloy Goldsby's new book, Piano Girl Playbook, was released on June 18th and is now available. You can get a 35% discount on the book by using this link and the code PGPB35 at check-out. That's a much better price than even Amazon, so don't miss your chance to get a great book at a great price! The discount code is good through the end of July 2021.

If you haven't read my interview with Robin Meloy Goldsby, be sure to check that out, too. We talked a lot about the book and there is a sample chapter at the end of the interview. Here's the link.
The Chickering Piano Factory, which was completed after Jonas Chickering's death in 1853, was the second largest building in America at the time. (The White House was the biggest.)

Pianoforte Magazine was the first publication to contain nothing but piano music. It first appeared in London in 1797. As a promotional come-on, each weekly issue contained a promissory note signed by the publisher. After someone had bought 250 copies and had 250 of these notes, they were supposed to be redeemable for a "Brilliant and elegant Pianoforte, far superior to many instruments sold for 25 guineas each." It is unknown whether or not anyone was able to trade in the coupons for a new piano.

House Concerts: Don't get too excited yet, but I have tentatively scheduled a concert with David Nevue for the afternoon of November 7th. David lives about 90 minutes away from Florence, so if we have to cancel or reschedule, it won't be a big deal. I'm starting to look at concerts for 2022, but don't want to get too far ahead of ourselves. With a big influx of tourists already flocking to Florence, anything can happen with the virus. Apparently, as of today, all Covid restrictions are gone in Oregon, but I'm still being cautiously optimistic. Anyway, we may have some great live music in Florence soon!

I should also mention that Dan Chadburn and Tom Nichols are planning to do their seventh fund-raising concert for the Oregon Coast Humane Society in the fall. This one will be live-streamed again, as we were able to raise between three and four thousand dollars last year! OCHS now has a very enthusiastic Executive Director, so we should be able to do even better with her help in getting the word out! Hopefully next year, Dan and Tom can play live here in Florence and maybe do an online concert, too. They do such awesome concerts live and I can't wait to have them play here again! I should have the date of the fund-raiser for the August issue of Pianotes.
The term "recital" first appeared in print in the announcement for a concert by Franz Liszt on June 9, 1840. It was laughed at in the beginning ("how can one recite on the piano?"), but the term has lasted through the present day.

Louis Moreau Gottschalk was the first pianist to arrange what has become known as a "monster concert" with large numbers of pianos and pianists playing together. He wrote "The Siege of Saragossa" for ten pianos, and it was first performed in June 1852.

Clara Schumann was the first performer to play Beethoven's sonatas for a concert audience. She did this in 1837, about seventeen years after the composer's death.

Interviews: I didn't have time to get any new interviews done in June, but I'm working on a few and should have one or two ready to go during the month. In the meantime, my recent interview with David Lanz is still on the homepage. Here's the link in case you missed it.
According to a newspaper estimate in 1791, about twenty-seven Boston families owned pianos. All of the instruments were made in London.

In 1821, a "moderately priced" cabinet piano by Clementi and Co. was priced at $475. American pianos were priced around $200, and were considered to be very inferior to imported pianos.

July Birthdays: Here are some musical birthdays that are coming up in July:

Happy Birthday to all of you!!!
In 1900, there were 7000 piano manufacturers in the United States, including families who made pianos in their homes. One out of every six people in America was involved in some aspect of the piano business.

Spruce is used for most pianos’ sound boards because of its wonderful resonance. On cheap pianos, the soundboards are often made of plywood.

Notable July Music Observances: If you need some more things to celebrate in July, here are a few suggestions:

In case you didn't know it, July is also International Blondie and Deborah Harry Month.
As a boy, Harry Truman arose at 5:00 AM to practice the piano. Ignace Paderewski, Premier of Poland as well as one of the greatest concert pianists ever, once gave Truman a piano lesson.

Liberace wore a gold artificial fingernail that had a candelabra engraved in it.

In 1910, the US manufactured 360,000 pianos; Germany made 150,000; Britain made 75,000; and France made 25,000. This is considered to be the peak of the piano’s popularity.
This month's photos are a combination of flowers from the yard, a couple of my cats, and a photo I took at Oregon Coast Humane Society. I'm doing some of their photography now, so it's a fun assignment! Have a safe and sane July 4th weekend and a great month! 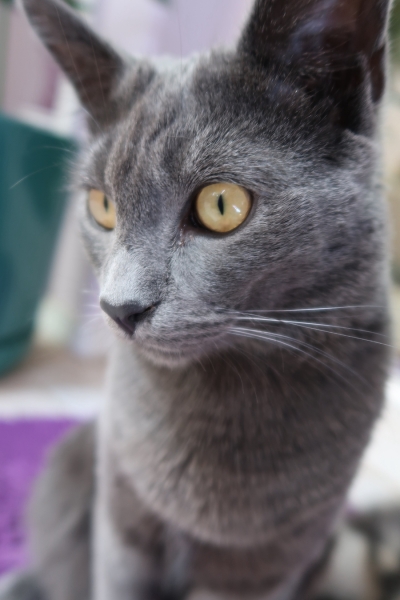 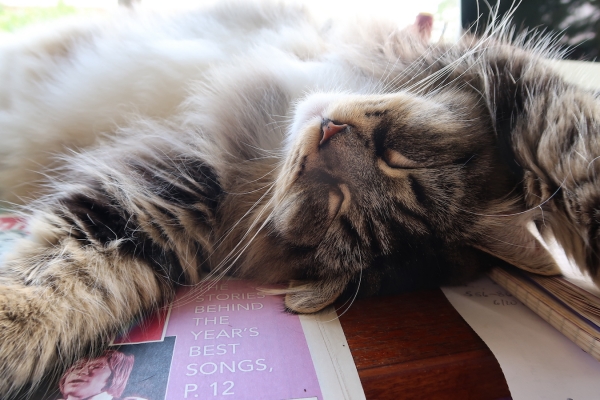 Pepper - the most relaxed cat in the world! 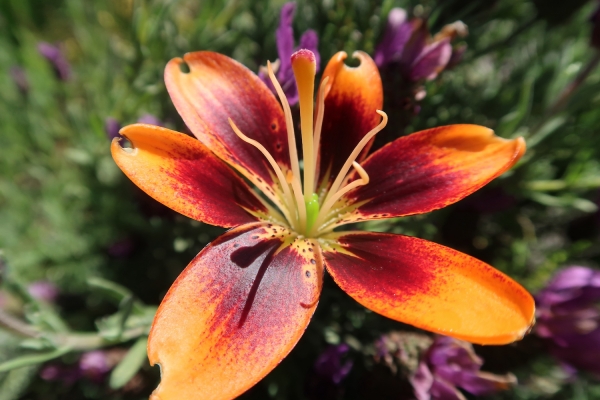 Lily growing through a lavender bush. 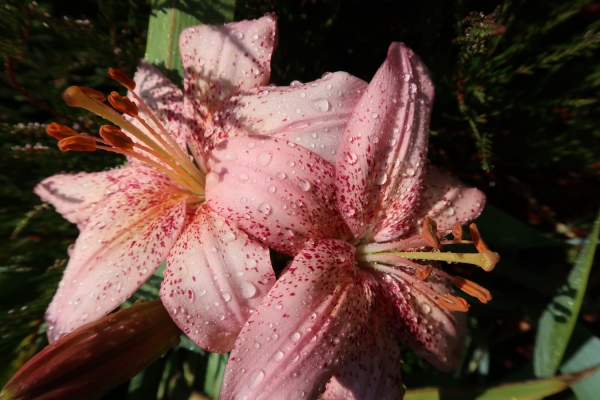 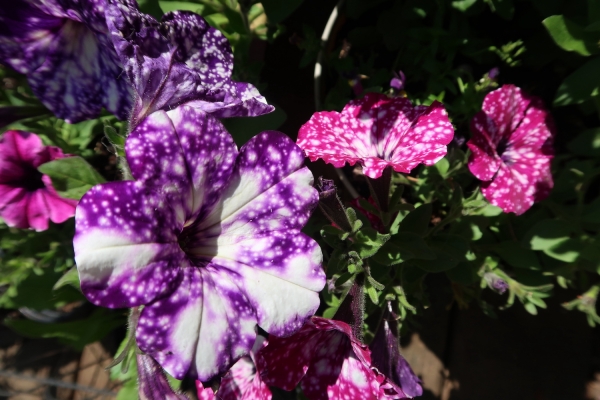 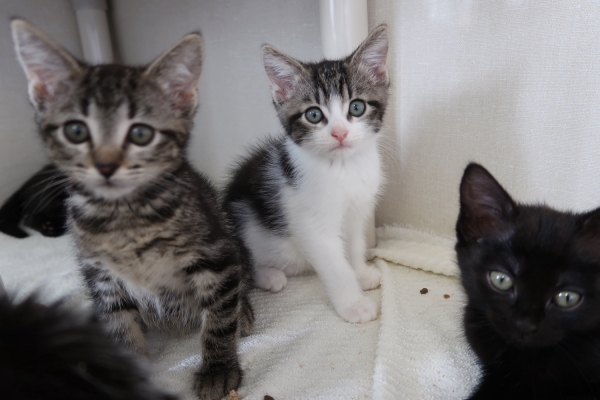 A few of the many kittens at Oregon Coast Humane Society. Available soon!