Wow! Another whirlwind month! I hope this finds you well and enjoying the change of season. We're starting to get quite a bit of rain here on the Oregon Coast, and I'm not sure if rain has ever been so welcomed! Even so, we're trying to coax some of the rain to move south and fall on California and other places that really need it!

I have lots of news for you, so let's get started!
The first magazine devoted to jazz was called "Le Jazz Hot," and was first published on February 2, 1935, in Paris.

Early pianos had 54 keys, while today's piano has 88. There are several piano makers who add additional keys to give their most expensive pianos more resonance.(Stuart and Sons in Australia has 102-key and 97-key grands, and some Bosendorfer pianos also have additional keys in the bass.)

Jazz pianist Dave Brubeck was raised on a cattle ranch that his father managed. Dave often worked out musical compositions while riding horseback to do various jobs. The rhythm of his galloping horse would inspire him to work out new compositions as he rode, and he frequently found himself singing out loud. 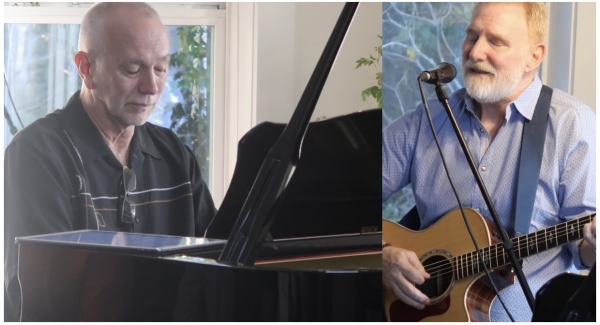 Dan Chadburn and Tom Nichols' Concert: As much as I wish we could do a "live and in-person" concert here in Florence to raise funds for our local Oregon Coast Humane Society, the next best thing - a concert streamed from YouTube - is happening on Sunday October 10th at 3:00PM Pacific / 6:00PM Eastern time. This is the eighth concert pianist/composer Dan Chadburn and guitarist/singer/songwriter Tom Nichols have done to benefit our local animal shelter, and I'm so grateful for their dedication! The concert will include lots of music plus a couple of appearances by the OCHS Executive Director, Elizabeth Thompson, lots of animals, and a few surprises. Don't miss it! The concert is free, but if you would like to donate, there will be info posted on how to do that.

You will need a link to sign into the concert on Sunday the 10th, but you should be able to watch the concert anytime after it is aired. I will send the link to everyone on my Pianotes email and concerts lists on Monday the 4th - or as soon as the link is available - and, as far as I know, the concert should be viewable from all over the world. I will also have the link on the MainlyPiano.com homepage and it will be on the OregonCoastHumaneSociety.org site, too. I will email the concert flyer along with the code early next week, and the concert info is here.

I hope you can join us for about an hour of great music for a great cause!
The first piano concert in New York was in 1773.

Early pianos were made in small workshops where a single craftsman and a few assistants produced on a very small scale. Bartolomeo Cristofori was employed by a rich, music-loving prince, so he had the advantage of being able to build one piano after the next, adjusting his designs as he gained more experience. He was also able to train assistants, some of whom started their own workshops.

The first magazine devoted to the piano was "Pianoforte," which was first published in London in 1797.

New Reviews: An unprecedented amount of music continues to be released while artists are staying close to home, so I have lots of new reviews in a variety of styles by artists from the US, Canada, Serbia, Italy and Australia! There are some new sheet music reviews, too. Something for everyone! You can find them all here.

Suzanne Ciani was the first female composer to write the complete score for a major motion picture - “The Incredible Shrinking Woman” in 1981.

Until about 1750, the thumb was rarely used in keyboard playing. It was supposed to "hang loosely" below the keys. Movement around the keyboard was accomplished by crossing the 4th finger over the 5th, and the 3rd over the 4th or 2nd which is now usually considered to be poor form.

The organ was the first keyboard instrument. It uses pipes rather than strings to produce its sound.

New Interview: I did an in-depth interview with Jill Haley that was just posted on 9/30. Jill is an oboist, English horn player and pianist/composer probably best known for her series of albums composed about US National Parks, Monuments and Sites. You can check it out here.
For a while, the system of white (ivory) keys for naturals and black (ebony) keys for sharps and flats was reversed. At the time, ebony was much cheaper and easier to find, so the naturals were black, and the sharps and flats were white.

David Lanz and Paul Speer’s “Behind the Waterfall” (1985) is considered to be the first “new age” single.

On December 17, 1825, Alpheus Babcock, an American, was granted a patent on a complete iron frame for a square piano. Babcock was never able to derive much profit from his important invention.

Looking Ahead to the Holidays: I've been compiling a list of people's two biggest holiday wishes for a lot of years, and I'll be doing that again for the December issue of "Pianotes." I thought it might be a nice idea to compile a list of two things people are most grateful for to include in the November issue. Yes, that's the month for Thanksgiving in the US, but I think all of us could use a reminder of what we are truly thankful for - no matter where we live. You can send an email to kathypiano@gmail.com with the two things you are most grateful or thankful for any time, and I'll send out a reminder around the 20th of October so I have time to put the list together.
The first African-American band to play in Carnegie Hall was Count Basie’s Band in 1939.

The term “grand piano" didn’t come into use until 1777. The early upright pianos were called “giraffes.”

David Nevue’s House Concert: David Nevue has decided to postpone his November concerts until the surge in COVID cases here in Lane County goes back down, and I agree. To do social distancing here in my living room would mean that only a few people could come and enjoy the music, so we’ll plan to do a concert with David when it is safer to do so. Sorry….
The damper pedal is often referred to as the "loud" pedal, but it does not change the volume of sound that comes out of the piano. It only sounds louder when the pianist holds it down too long and all of the strings are vibrating at once!

Richard Nixon studied violin, clarinet, saxophone, and piano as youth, and continued to play the piano during his presidency.

The most prolific, versatile, and ingenious piano-inventor that ever lived was Jean-Henri Pape. He took out as many as 137 patents. His most useful ideas were the use of felt for covering piano hammers and the device of cross-stringing the piano strings. He designed the "console" piano, a round piano, an elliptical piano, and a hexagonal piano. He also developed a piano that used springs instead of strings.

October Birthdays: Here is a partial list of musical birthdays happening in October:

Happy Birthday to all of you!
One of the earliest recordings of a piano performance was by Johannes Brahms playing one of his Hungarian Dances.

The upright piano was invented in Philadelphia in 1800 by John Isaac Hawkins at almost exactly the same time it was invented by Mathias Muller in Germany. Hawkins was said to have also invented the ever-pointed pencil.

None of Cristofori’s pianos had pedals, although he developed an una corde system (soft pedal) in 1721.

October Music Celebrations: Here is another list of fascinating music-related things coming up this month!

Cheers!!!
In what was probably the first press interview with a musical instrument-maker, in 1711, Cristofori gave such a detailed description of his invention (the piano) that instrument makers all over Europe could duplicate his work and build their own pianos. The article was translated into German in 1725 and likely inspired pianos to be built in Germany as well.

The earliest German upright pianos were called pyramid pianos because of their symmetrical shape.

The first music for the piano was published in 1732.
This month's photos include two pictures of the newest member of our household. I wasn't looking to get another cat, but she was obviously starving and kept hanging around our deck for several weeks. Once I could handle her this past week, I took her in to the Humane Society and had her checked out. She had no chip, isn't "with kittens," and has a scar on her belly that looks like a spay scar. I tried hard to get her back to her owner(s), but couldn't find anyone who recognized her, so she decided to adopt us and is doing really well. I think we'll call her "Rosie" because of her reddish coat. She's getting along fine with the rest of the "zoo," so I guess she's home!

Here's to a great October! 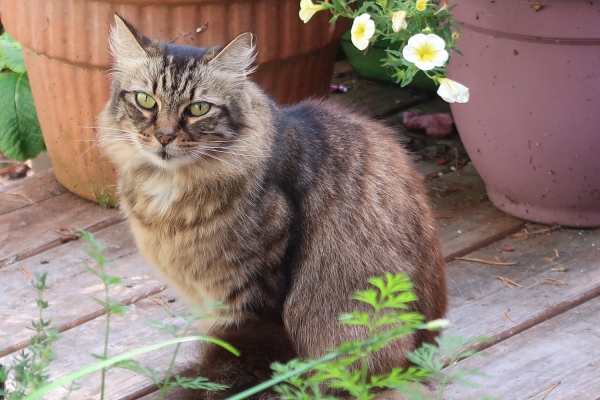 "Rosie" before she adopted us! 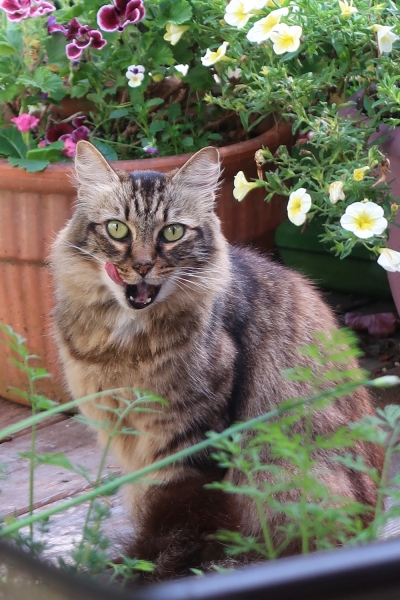 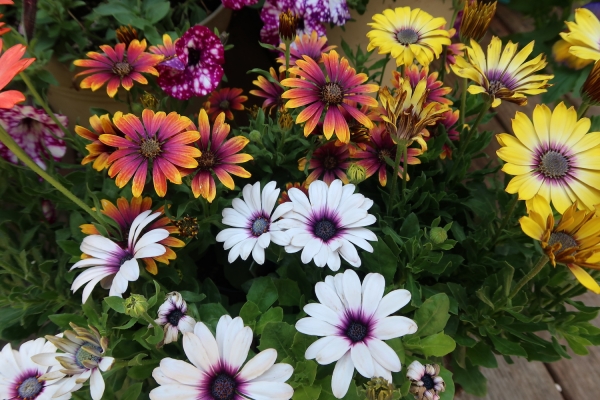 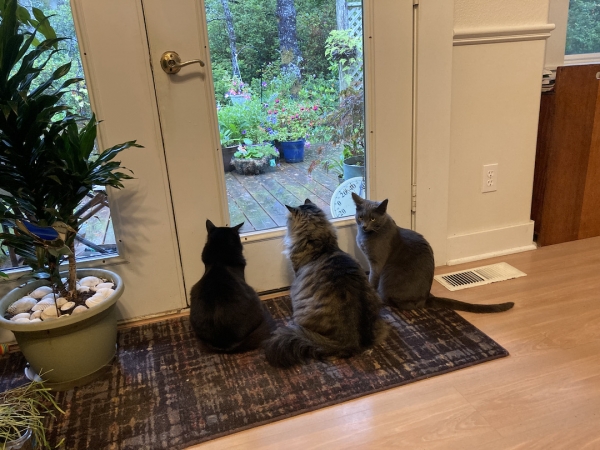 
Trivia Disclaimer: To the best of my knowledge, the music trivia and "factoids" within Pianotes are true, but I can’t guarantee it.
Read more Pianotes issues:
Full list • Next Issue: Volume 463 • Previous Issue: Volume 461