Greetings and Happy May to Everyone!

I hope this finds you well and enjoying spring! Florence, OR is nicknamed "The City of Rhododendrons" and our annual "Rhododendron Festival" is coming up later in the month. In the meantime, gorgeous flowers in every color you can imagine are bursting into bloom all over the city. We've had several hailstorms and lots of rain the past couple of weeks, so we hope those don't come back and knock the blossoms off the plants!

As usual, there is lots of "stuff" in this month's issue, so kick back for a few minutes and enjoy!
Scott Joplin's "Maple Leaf Rag" (1899) was declared the first million-selling piece of sheet music, but publisher John Stark originally doubted the composition's commercial appeal, saying that the music was too difficult and no one would be able to play it.

Piano rags can be a challenge to play with the fast jumps on the left hand and the often complex syncopated patterns on the right. This undoubtedly contributed to the popularity of player pianos.

Scott Joplin died in 1917 and received a posthumous Pulitzer Prize in 1976. During his lifetime, ragtime music was considered by many to be scandalous. Now it is considered to be American classical music.

We Did It!: The last week of April, we posted the 3000th music review (not counting sheet music and songbooks!) on MainlyPiano.com! At the moment, it stands at 3,002 reviews of albums and singles! There are reviews of 341 songbooks, 94 book and "other" reviews, and 255 artist interviews. There are 1112 Artist Pages on the site! What a ride!!!
In 1900, the prominent music magazine, The Etude, denounced ragtime as a "virulent poison" and "malarious epidemic" that was "damaging the brains of the youth to such an extent as to arouse one's suspicions of their sanity."

Scott Joplin's first ragtime opera (he wrote two), A Guest of Honor (1903), is entirely lost to us. The plot revolved around Black educator Booker T. Washington's 1901 visit to the White House to dine with President Theodore Roosevelt.

The complete piano works of Scott Joplin were performed at Carnegie Hall in 2017 to commemorate the 100th anniversary of his death.

New Reviews: It's been another busy month for reviewing with a wide variety of new music (and an oldie, too!) ranging from classical to an album composed and produced entirely on a cross-country train trip, to one titled Imaginary Trains and so much more! I also reviewed three new songbooks and Steve Yip reviewed a historical book. You can find links to all of them here.
Benny Goodman was the hottest bandleader of the late 1930s and led the most popular dance orchestra of the time. He was also a clarinetist who commissioned classical works from Aaron Copland and Bela Bartok.

Benny Goodman used his status as a pop culture hero to promote desegregation a full generation before Congress passed the Civil Rights Act.

New Interviews: I did two interview updates with pianist/composers Craig Urquhart and Wayne Gratz in April where we talked about their new albums and many other things. In May, I plan to interview Chad Lawson and Bernward Koch, so check back during the month!
Thomas Jefferson was one of the first people to import a pianoforte to the US. He originally ordered a clavichord to give his fiancee, but changed his mind once he saw the newly developed pianoforte. He made the purchase in 1771.

The first Steinway piano was made in the kitchen of founder Henry Steinweg in Seesen, Germany, in 1836. (He changed the family name to Steinway when he emigrated to the US in 1850.)

Soon after Abraham Lincoln’s inauguration, Mary Todd Lincoln acquired a 7-octave grand piano. It stood in the Red Room, where their sons, Willie and Tad, took their piano lessons.

House Concerts: I had one concert planned in August with pianist/composer Brian Kelly, but he had to cancel. Neil Patton was going to share the bill with Brian, and maybe we can have him do a solo concert. We'll see how the COVID numbers look as we get closer, but it's not looking too good here in Florence, OR right now. Neil lives a little more than hour away from me, so last-minute changes aren't too inconvenient. We'll hope for the best!
Composer Sergei Rachmaninoff performed at the White House three different times.

By Franklin Roosevelt’s presidency (1933-45), the piano in the East Room was in need of repair, so Steinway offered to build a new White House piano as the firm’s 300,000th piano. President Roosevelt helped to design the piano, which has eagle-shaped legs and paintings on the case depicting American musical scenes.

QRS, the leading maker of player piano rolls, purchased the piano manufacturer, Story and Clark/ Classic Player Piano Corp. in 1994. This is an interesting note because Melville Clark of Story and Clark founded QRS in 1900.

Happy Birthday to all of you!!!
The first pneumatic player piano was granted a patent in France in 1863.

The International Piano Archives in Maryland is the only library in the world that concentrates exclusively on materials pertaining to classical piano music and its performance. It houses an estimated 96% of all commercial piano recordings ever issued, plus taped copies of most of the remainder. It currently has 11,500 78-rpm records; 25,000 vinyl records (LPs); more than 4000 reel-to-reel and cassette tapes; more than 20,000 compact discs; 3000 reproducing piano rolls; 2500 books about the piano and pianists; over 21,000 piano scores; and many other items and collections.

The piano produces the widest range of sound of any instrument except the organ.

May Musical Holidays and Observances: If Mother's Day and Memorial Day aren't enough for you, here are some more "holidays" coming up in May. Oh, and May is International Drum Month!

Now you can't say no one told you!

In 2006, the British pianist Stanislav Yovanovitch visited Harbin, a city on the Northeastern spur of China for its annual music festival. During his time there, he joined 1,000 fellow players in a mass rendition Schubert's "March Militaire" in the city square. The event set the world record for most pianists playing one piece at the same time. That concert was one of the items the city listed on its résumé (along with being home to the country’s oldest symphony orchestra) to help it win an official recognition as “Music City” from the United Nations.

The term “grand piano” was introduced in 1777 in Robert Stodart’s application for an English patent for a combination piano-harpsichord. It was called “grand” to distinguish it from the smaller square pianos being made at that time.

The grand piano was invented in both Germany and London in the 1770’s.

That should do it for this month's issue! The photos this month are of a litter of kittens born at the Oregon Coast Humane Society recently. I volunteer there one afternoon a week and it has been so much fun watching them grow! There are eight kittens plus Mama, and they are all wonderful! (No, I have no plans to adopt them all, but it's tempting!)

Have a great month!
Kathy 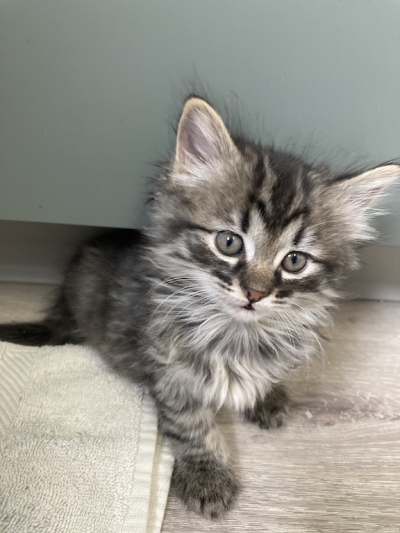 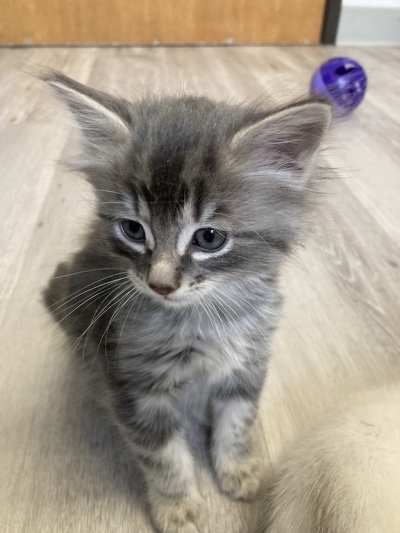 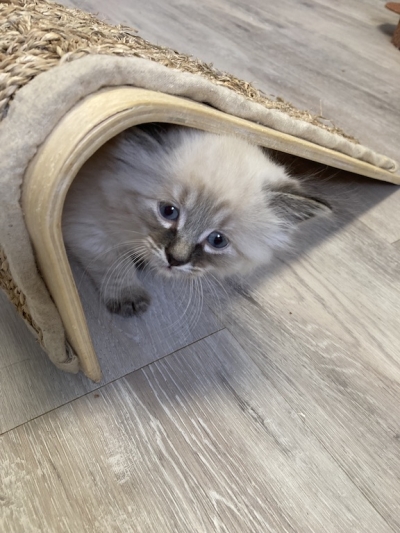 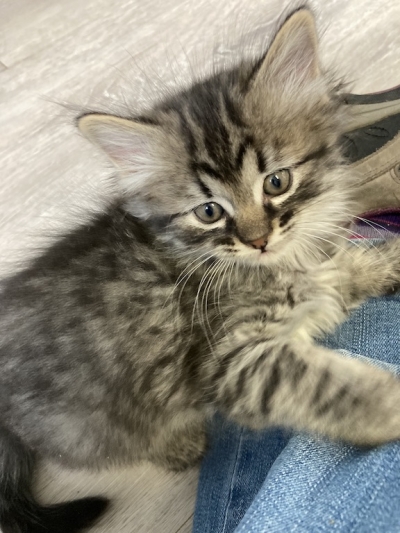 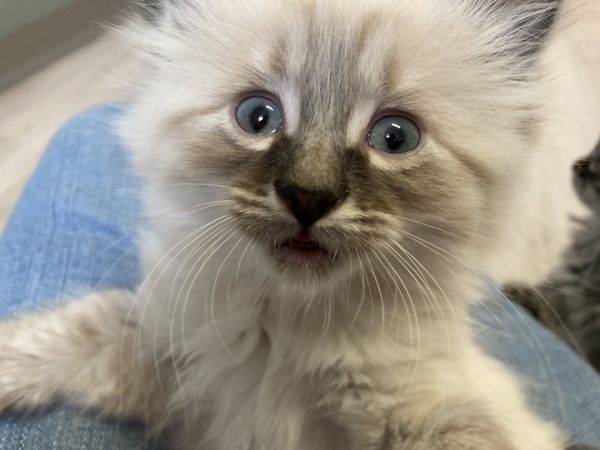 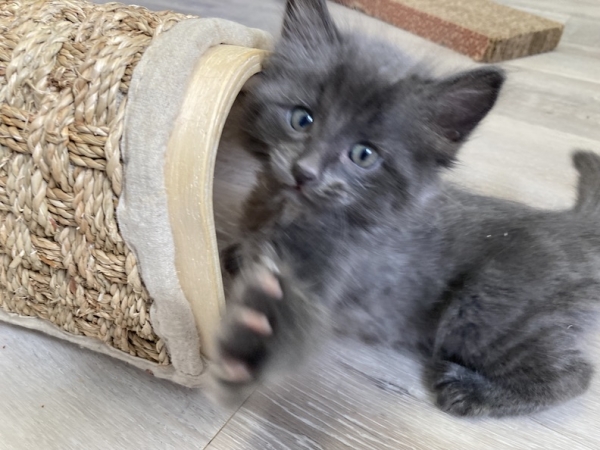