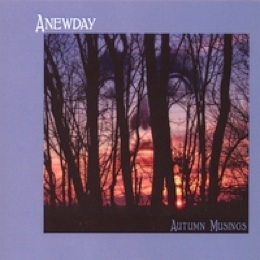 Anewday's Website Anewday's Artist Page on MainlyPiano
Album Links
Amazon (referral)iTunes
This site contains affiliate links to products. We may receive a commission for purchases made through these links.
Autumn Musings
Anewday
2006 / Fat Cat Music Productions
42 minutes
Review by Kathy Parsons
It’s funny how some things in life are just meant to be. Pianist/composer Rob Miller had composed a song for his girlfriend as a Christmas gift four years ago, and went to a local music store (in Nova Scotia) to see about recording it. That’s where he met Ron Huestis, who recorded the song in his home studio (Fat Cat Productions). Over time, Rob took several more compositions to Ron, who recorded them for him. One day, Ron suggested that the songs should be orchestrated and said that there were enough completed songs for a CD. Such was the birth of the exciting new group, A New Day. (The original song, “A Song for Scheherazade,” was a big hit with Rob’s girlfriend, underscoring my comment the some things in life are just meant to be!) Most of the orchestrations are fairly minimal, enhancing the beauty of Rob’s piano work, and a few are more collaborative and suggest the unbridled joy of making music found in some of Yanni’s early work. A couple of the songs have additional musicians on guitar and violin. The music is deeply personal and emotionally rich, and yet the themes are accessible and universal. A couple of the fourteen songs suggest the celtic heritage from Miller’s upbringing in Cape Breton Island; others are more classical or jazz-tinged. The pieces are varied in instrumentation and style, making the music ideal for concentrated listening, and yet the CD is consistent enough to be a very pleasant backdrop. “Autumn Musings” will certainly be one of my favorite albums of 2006.

The opening track, “Celtic Dewdrops,” begins with the sound of rain, thunder, and ethereal voices. As the rain sounds continue, the piano enters with a simple but gorgeous melody backed by a deep drum. As the theme repeats itself, the orchestration becomes fuller and more dramatic, suggesting the sweep of a magnificent movie theme. I was immediately hooked by this piece, and the CD never let go. In “Summertime Reverie,” the piano is only minimally enhanced with other instruments - just enough to enrich the warmth of the daydream and to gently coax it to float on air. “Blue Skies in Winter” is another very visual piece, and features Gordon Stobbe on “fiddle.” The piece suggests the simplicity of a country village nestled in the snow, and segues into “Snowflakes Dancing,” which is one of the pieces that reminds me a bit of the joy and sense of fun of Yanni’s early recordings. “Spanish Reflections” is a beautiful duet for piano and classical guitar that features Bob Sutherby. “A Song For Scheherazade” is mostly piano, full of passion that is both elegant and exotic. “Dreams Come True” is a carefree, rhythmic piece that dances on air. The title track is one of my favorites. Sunny and optimistic, you can almost feel the piece smiling. “Irish Farewell” brings the CD to a close with a loving musical hug and a wistful good-bye.

“Autumn Musings” is an amazing debut from A New Day. Happily, the duo are currently working on a second CD due for release in the summer of 2007. I predict great things for these guys! Samples can be heard and purchases can be made at www.anewday.ca. Highly recommended!

January 1, 2007
This review has been tagged as:
Debut AlbumsKathy's Favorites: 2006
Anewday's Website Anewday's Artist Page on MainlyPiano
Album Links
Amazon (referral)iTunes
This site contains affiliate links to products. We may receive a commission for purchases made through these links.
More reviews of Anewday albums 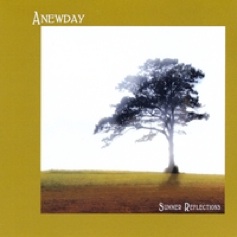