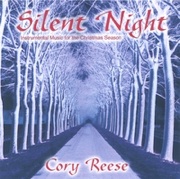 Cory's Website Cory's Artist Page on MainlyPiano
Album Links
iTunes
This site contains affiliate links to products. We may receive a commission for purchases made through these links.
Silent Night
Cory Reese
2005 / Cory Reese
43 minutes
Review by Kathy Parsons
This second incarnation of Cory Reese’s 2003 release of the same name is much improved in that he recorded on a grand piano rather than an electronic keyboard, removed a vocal track, and added mostly “real” musicians rather than keyboard samples. The first album had twelve tracks and this one has ten, including a new addition of “Away In a Manger.” The first album had three original pieces, and this one has two, so this really is a new version of the first recording. The arrangements are very quiet and subtle, and all reflect on the spiritual side of Christmas. Reese tends to stick to the traditional melodies, adding broken chords on the left hand. He doesn’t vary this method too much, but I know a lot of people like straight-forward arrangements of their Christmas music, and this CD should fill that bill very well.

The album begins with a lovely arrangement of “What Child Is This?” for piano with keyboard washes (strings). Warm and thoughtful, this is a nice start. I still like the original compositions the best on this album. Reese’s “The Gift” is an elegant, soulful piece for piano and (sampled) strings that obviously really comes from the heart. “Eyes Of a Child” is the other piece Reese composed. Joined by Dennis Zwang on flute and Ted Jensen on light percussion, this is a very effective piece. “O Holy Night” presented here as a piano solo with light keyboard embellishments is much stronger than the vocal on the first album. “Silent Night” begins with an ethereal keyboard prelude that suggests a dark, peaceful calm. The piano carries the main parts of the song, with keyboard sounds in the background - a very lovely arrangement. I also really like “Far, Far Away On Judea’s Plain,” a piece I’m not familiar with (other than from Reese’s first album). Dennis Zwang returns on clarinet, making this a gentle duet with Reese’s piano. My favorite of the traditional carols on this album is “We Three Kings.” A little more improvisatory than the other songs, Reese sounds completely at ease with the piano, and adds some interesting touches to the familiar melody. It is also the only piece that is piano only, and it sounds great all by itself! Reese’s arrangement of “Away In a Manger” utilizes one of the song’s lesser-known melodies (there are at least forty melodies for this song!), creating a simple, loving lullaby to close the album.

So, if you prefer your Christmas music played simply and without a lot of fanfare, Silent Night should do it for you. It is available from coryreese.com and cdbaby.com. Cheers!
October 17, 2007
This review has been tagged as:
Holiday Albums
Cory's Website Cory's Artist Page on MainlyPiano
Album Links
iTunes
This site contains affiliate links to products. We may receive a commission for purchases made through these links.
More reviews of Cory Reese albums 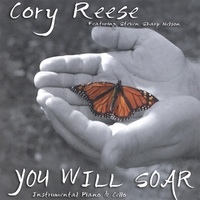 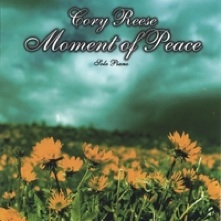 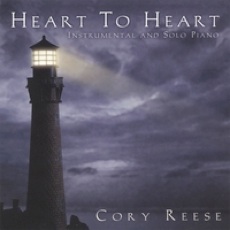