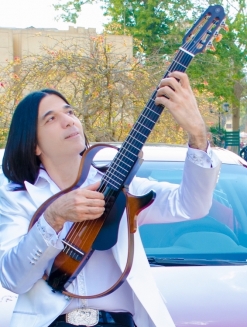 Emad's Website Emad's Artist Page on MainlyPiano
Album Links
YouTube
This site contains affiliate links to products. We may receive a commission for purchases made through these links.
Strangers In the Night (single)
Emad Hamdy
2021
2 minutes
Review by Kathy Parsons
"Strangers In the Night" is a solo acoustic guitar single from Egyptian guitar master Emad Hamdy. This arrangement of the Frank Sinatra classic will be featured on Hamdy's soon-to-be-released album, The Romantic Guitar Of Emad Hamdy. The song is thought to have been composed by Bert Kaempfert with English lyrics by Charles Singleton and Eddie Snyder, but there is some question about that. It was made famous by Frank Sinatra's 1966 recording, which became the title track of Sinatra's most commercially-successful album and won a couple of Grammy Awards, including "Record of the Year." Relying more on emotional expression than flashy fingerwork, this solo guitar arrangement has a dreamy, expressive feeling sure to touch all but the coldest of hearts.

Emad Hamdy is the main professor and concert master at Cairo Opera House and the American University in Cairo. He has won numerous international awards, titles and honors, and was named the #1 musician in Egypt and the Middle East by the Yamaha Corporation in Japan; he is the region's Yamaha representative. Hamdy is the first guitarist in Egypt to play a guitar concerto with the Cairo Symphony Orchestra in 1988, and continues to do so. He is also the founder of the most important guitar schools in Egypt.

"Strangers In the Night" is currently available as a YouTube video. More links will be added as they become available.
July 28, 2021
This review has been tagged as:
Guitar musicSingle Release
Emad's Website Emad's Artist Page on MainlyPiano
Album Links
YouTube
This site contains affiliate links to products. We may receive a commission for purchases made through these links.
More reviews of Emad Hamdy albums 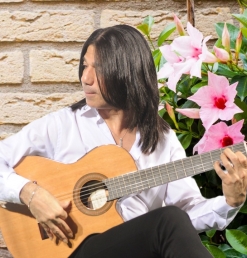 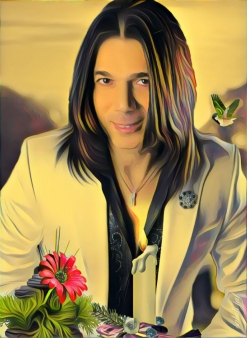