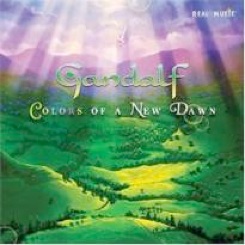 Gandalf's Website Gandalf's Artist Page on MainlyPiano
Album Links
Real MusiciTunesAmazon (referral)
This site contains affiliate links to products. We may receive a commission for purchases made through these links.
Colors of a New Dawn
Gandalf
2004 / Real Music
55 minutes
Review by Kathy Parsons
Austrian multi-instrumentalist, Gandalf, has created another soothing confection featuring a variety of acoustic and electric guitars, piano, bouzuki, mellotron, keyboards, and percussion. Ambient and often melodic, Colors of a New Dawn continues Real Music’s tradition of releasing music that is light, inspirational, and optimistic. Gandalf’s music is more guitar-based than 2002’s, but there are some similarities in approach and style. (I mention that only as a point of reference since Gandalf isn’t yet as well-known as 2002.) I would imagine that having this album playing in a massage or spa situation would put someone very close to heaven or at least near bliss! The serene mood is carried throughout the album, and some of the tracks include nature sounds and voices.

I especially like “In the Presence of Angels,” the only track with lyrics that are interspersed within the piece. Flute and little bells create an ethereal feeling, as do the sweet voices. The shorter reprise of this song is also gorgeous. “Iris” has more of a cinematic sweep. At just under nine minutes, this beautifully orchestrated piece has plenty of time to evolve and build. Inspired by a story written by Hermann Hesse, the song tells of the return to a forgotten sanctuary from childhood. “Hearts in Celestial Union” floats on a cloud of contentment. Flutes, bells, guitars, and a variety of keyboard sounds put the listener into a dreamy state of mind that is most pleasant. “Flowers Along the Way” is another favorite, telling of the joy of meeting “related souls” along the path of life. The title track describes the beauty of a sunrise by the sea. As the piece develops, it becomes bigger, more colorful, and almost triumphant - very effective and evocative.

Colors of a New Dawn provides a soothing massage for the mind, and a gentle musical place to return to for renewal and uplifting. It is widely available at online and offline music outlets wherever Real Music’s CDs are sold.
January 16, 2005
Gandalf's Website Gandalf's Artist Page on MainlyPiano
Album Links
Real MusiciTunesAmazon (referral)
This site contains affiliate links to products. We may receive a commission for purchases made through these links.
More reviews of Gandalf albums 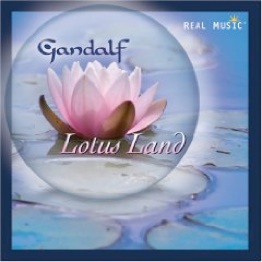