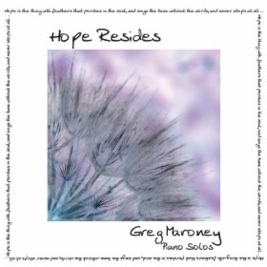 Greg's Website Greg's Artist Page on MainlyPiano
Album Links
Amazon (referral)iTunesSongbook Review
This site contains affiliate links to products. We may receive a commission for purchases made through these links.
Hope Resides
Greg Maroney
2013 / Hen House Records
50 minutes
Review by Kathy Parsons
Hope Resides is the eleventh solo piano release (of new material) from Greg Maroney, one of my very favorite pianist/composers. I’m especially excited about this album because it sees a return to some of Maroney’s more turbulent and powerful music. Composed during a period when Maroney and his wife were building an addition onto their farmhouse in rural Pennsylvania so that Maroney’s in-laws could move in with them, it was a year of upheaval and change, culminating in Maroney recording the album the night of the huge storm, Sandy, in October 2012. Fully expecting to lose electricity and to have to edit out the storm noises, Maroney played his heart out as the storm raged. (The power stayed on and none of the storm noise can be heard in the music!) I probably say this with each of Maroney’s new releases, but I really do think this is his best album to date. The emotional range is from light and cheerful to sweetly romantic to dark and intense - music to suit every mood! It’s an amazing tour de force and certain to be one of my favorites of 2013.

Hope Resides begins with the title track, a peacefully flowing piece that gently soothes and reassures. Trills give the piece a somewhat classical feeling, but the graceful melody and passionate emotions keep it in the present - a very beautiful start! “Narcissis” refers to the spring garden blooms (rather than the mythological character) and the lighthearted joy of walking through them. “Against the Tide” begins quietly and almost mournfully. The second section picks up the tempo, building energy as it evolves. By the third movement, we’re really swirling. This one is really going to be a blast to play - I get itchy fingers every time I hear it!!! From there, we go to the lighter “In the Moment” and the tender “Love Song,” a gorgeous ballad that overflows with deep feeling. “Waiting” is a favorite. Poignant and full of longing, it conveys the mix of emotions we experience while waiting for someone or for something to happen. “Into the Fray” begins simply, perhaps telling a story. As the piece develops, it gradually builds intensity to a full-blown whirlwind in the middle - exciting! Like its inspiration, “Kaleidoscope” is constantly changing with many colorful musical tones and shapes. “For Jean” is a beautiful piece composed for Maroney’s mother-in-law, who suffers from Alzheimer’s, reminiscing about when she was fully herself - a very special tribute to a loved one. The closing track is a real treat! “The Reluctant Ballerina Revisited” is a new arrangement of one of my favorite Maroney pieces. It tells the story of a young ballerina who is very shy but loses herself in the music she hears, completely letting go and dancing with abandon until she realizes what she is doing and becomes self-conscious and timid again - an amazing piece!

What a great album! And there is good news for pianists - Greg is already working on the sheet music, so it will be coming along soon! Hope Resides is available from gregmaroney.com, Amazon, iTunes, and CD Baby. I give it my highest recommendation!
January 20, 2013
This review has been tagged as:
Kathy's Favorites: 2013
Greg's Website Greg's Artist Page on MainlyPiano
Album Links
Amazon (referral)iTunesSongbook Review
This site contains affiliate links to products. We may receive a commission for purchases made through these links.
More reviews of Greg Maroney albums 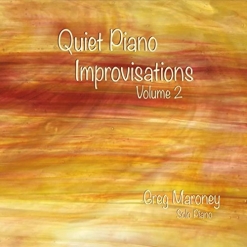 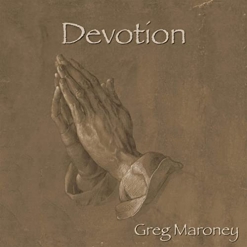