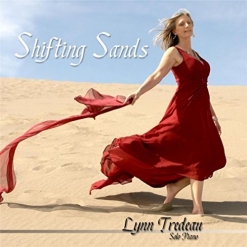 Lynn's Website Lynn's Artist Page on MainlyPiano
Album Links
Amazon (referral)iTunes
This site contains affiliate links to products. We may receive a commission for purchases made through these links.
Shifting Sands
Lynn Tredeau
2017 / Lynn Tredeau
46 minutes
Review by Kathy Parsons
Shifting Sands is the fourth album from pianist/composer Lynn Tredeau. Her first three albums were nominated for a variety of awards and I have no doubt that this one will be, too. I had the opportunity to see Lynn perform live this past January and was very impressed with the grace of her playing as well as her music. A pianist from a very early age, Tredeau always played music composed by other people until just a few years ago when she started composing her own. She released her first album, Echoes of Life, in early 2015, and her musical career immediately took off. Currently living in Idaho, Tredeau’s music often suggests the vast openness of parts of her state in addition to her own life experiences. Her music is not complicated or overly-dramatic, preferring to express peaceful moods, the beauty of her surroundings and her own life story.

Shifting Sands begins with “Lost in Familiar Surroundings,” a melancholy piece about feeling like a stranger in your own life. This can be a very unsettling experience, but Tredeau’s piece never reaches despair or loses hope. The title track references a state of constant change - like life itself - and how change can be unsettling and yet invigorating. I really like this one! “Dance of the Unknown” begins with a lively passage in the upper registers of the piano and gradually works its way into the middle of the keyboard where it slows a bit, seeming to be in search of something - perhaps the “unknown” of the title? “Looking to Lowman” tells the story of sitting high on a mountain overlooking Lowman, ID, watching a wildfire and thinking that despite the loss of so much beauty, new growth would follow. The mood is pensive - sad and yet reflecting hope. “Travel Me Home” is the darkest of the twelve pieces and was inspired by times when all you want is to return to the safety and security of your home. Pensive and heartfelt, it’s another favorite! The title for “Life at Four” could mean several things, but I hear a sweetness and innocence in the music that makes me think the piece was inspired by a beloved grandchild. “To Breathe at Last” is almost ambient in its soothing freedom and gentle touch. “The Last Mile” is a remembrance of holding the hand of a loved one during the final moments of life. Even though there is sadness in the music, there is hope, love and tenderness - also a favorite. “Whispers of Hope” is a graceful waltz in a moderate tempo that seems to express encouragement to move forward despite setbacks. “If Ever In My Life” is a quiet moment shared with a loved one, being honest and vulnerable, and brings the album to a peaceful close.

I would have to say that Shifting Sands is my favorite of Lynn Tredeau’s albums so far. It is available from www.LynnTredeau.com, Amazon, iTunes and CD Baby. Highly recommended if you are looking for some soothing, comforting solo piano music.
May 16, 2017
This review has been tagged as:
Kathy's Picks
Lynn's Website Lynn's Artist Page on MainlyPiano
Album Links
Amazon (referral)iTunes
This site contains affiliate links to products. We may receive a commission for purchases made through these links.
More reviews of Lynn Tredeau albums 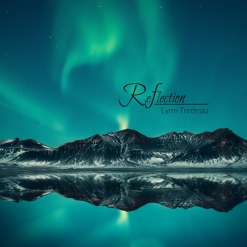 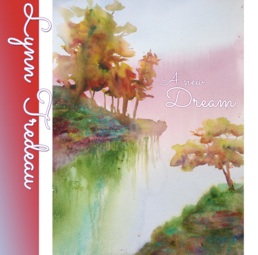 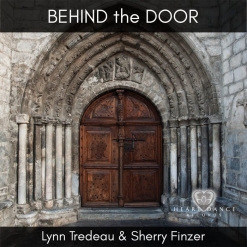 Behind the Door (single)
with Sherry Finzer
2020