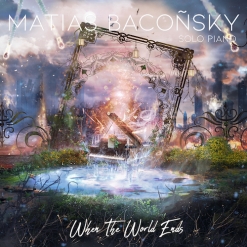 Matias' Website Matias' Artist Page on MainlyPiano
Album Links
Amazon (referral)iTunes
This site contains affiliate links to products. We may receive a commission for purchases made through these links.
When the World Ends
Matias Baconsky
2018 / Matias Baconsky
48 minutes
Review by Kathy Parsons
When it comes to finding themes for his albums, Argentinian pianist/composer Matias Baconsky is certainly not one to shy away from the dark side! When the World Ends is his third album, following 2017’s Straight From the Heart and his 2016 debut, Life and Death. Not yet in his mid-20’s, Baconsky cites Amy Lee from Evanescence and pianist/composer/violinist Jennifer Thomas as his biggest musical influences. It was Amy Lee who inspired Baconsky to start playing the piano at the age of sixteen. When the World Ends is a themed album that tells the story of a man living at the end of the world surrounded by his loved ones. As they share their beautiful memories, they hope to find themselves and each other in another life.

The album and story begin with “Awakening,” a very dark prelude that expresses a sense of dread and doom. Much of the piece is played in the deep bass of the piano, adding to the darkness. “Serenity” could also be called “The Calm Before the Storm,” as it really isn’t peaceful. Something is coming, but no one knows for sure what it is or what it will bring. “Time To Say Goodbye” has a throbbing intensity, but also suggests feelings of sadness. What would you say to those you love? How do you prepare for something so catastrophic? “Not Strong Enough” seems to express regret and deep grief, perhaps thinking of things left undone and unexperienced while the man in the story had the chance. Or maybe he is feeling the pain of not being able to save those he loves from this darkest time. “May We Meet Again” isn’t exactly light, but it is gentler with a more hopeful outlook. “Sky Is Falling” seems to convey a sense of resignation rather than panic or fear that the end is close. After “One Last Breath” comes “Afterlife” and a growing sense of excitement along with discovery and even joy. “New Life” presents an interesting contrast with the left hand in the deep bass of the piano and the right hand higher into the treble than it is for much of the album. This piece is also more melodic than most of the others, and gives the feeling of rising either physically, spiritually, or even both. “The Final Page” begins with a dark intensity that gradually lightens as it builds energy, leaving it to the listener to finish the story.

Obviously the music on this album brought many vivid images and feelings as I listened to it (several times). Those images will be different for each listener, as will the story - a fascinating concept! When the World Ends is available from Amazon, iTunes, and other streaming sites. Check it out!
July 19, 2018
Matias' Website Matias' Artist Page on MainlyPiano
Album Links
Amazon (referral)iTunes
This site contains affiliate links to products. We may receive a commission for purchases made through these links.
More reviews of Matias Baconsky albums 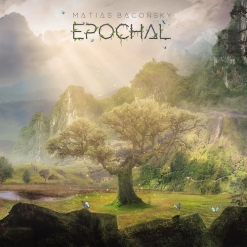 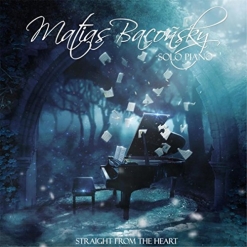 Straight From the Heart
2017