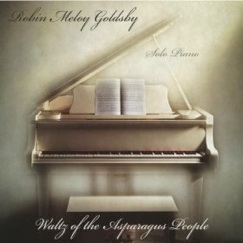 Robin's Website Robin's Artist Page on MainlyPiano
Album Links
Amazon (referral)iTunesBook Review
This site contains affiliate links to products. We may receive a commission for purchases made through these links.
Waltz of the Asparagus People
Robin Meloy Goldsby
2011 / Bass Lion Music
63 minutes
Review by Kathy Parsons
I have been a big fan of Robin Meloy Goldsby’s music since Robin Spielberg introduced me to it at least fifteen years ago with an unreleased cassette tape. I have also been a big fan of her writing since she asked me to write a “blurb” for her first book, Piano Girl, several years ago. Five CDs and three books later, I’m a bigger fan than ever! Goldsby recently released a new book and companion CD both titled Waltz of the Asparagus People. The book is subtitled The Further Adventures of Piano Girl, and each chapter is an autobiographical story, most of which occurred after the tales in Piano Girl.

The fourteen piano solos on the companion CD correspond to the stories in the book and richly illustrate them with sonic colors and textures. They also make me wonder how Goldsby could ever feel that her playing isn’t “good enough” for a concert stage. What I DO understand is the feeling of absolute panic at the thought of a full room of people sitting and listening intently rather than simply enjoying her music in the background over dinner and drinks. Goldsby’s piano touch is graceful and elegant, but is also completely approachable and inviting. Eight of the tracks are originals, five are her arrangements of favorites, and one was composed by her daughter, Julia. Some of the cover tunes would be considered pop music in most pianists’ hands, but Goldsby adds such a warm and personal interpretation to them that she elevates them to a higher dimension and makes them her own. Her original compositions are even more personal and come from deep within. All fourteen pieces are exceptional with no filler anywhere on the album. The covers include Yiruma’s popular “A River Flows in You,” The “Feather” theme from Forrest Gump, the theme from Romeo and Juliet, “Comptine D'un Autre Été, L'après-Midi” by Yann Tiersen, and “Air on a G String: The Glass Piano” based on JS Bach. I love all of Goldsby’s originals, but especially like “Mother’s Hands,” “Till I Lost You,” and “Little Big Soul.”

Including its whimsical title, Waltz of the Asparagus People is exceptional in every way and is sure to be on my list of Favorites for 2011. It is available from goldsby.de, Amazon, and iTunes. I give it my highest recommendation. Bravo, Robin!!!
June 6, 2011
This review has been tagged as:
Kathy's Favorites: 2011
Robin's Website Robin's Artist Page on MainlyPiano
Album Links
Amazon (referral)iTunesBook Review
This site contains affiliate links to products. We may receive a commission for purchases made through these links.
More reviews of Robin Meloy Goldsby albums 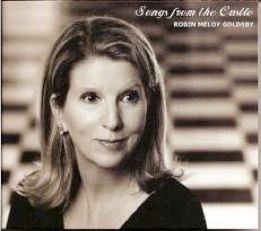 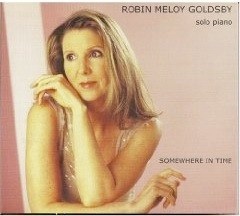 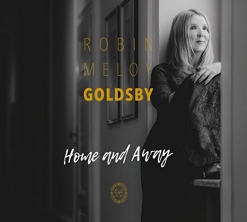