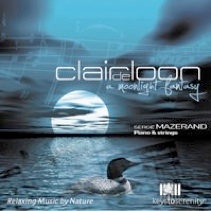 Serge's Website Serge's Artist Page on MainlyPiano
Album Links
Amazon (referral)iTunes
This site contains affiliate links to products. We may receive a commission for purchases made through these links.
Clair de Loon
Serge Mazerand
2009 / Keys To Serenity
57 minutes
Review by Kathy Parsons
Clair de Loon is pianist Serge Mazerand’s sixth release, and I think it is by far his best. Rather than accompanying his piano improvisations with nature sounds, Mazerand has taken some favorite classical pieces, arranged them for piano and strings, and added occasional loon calls. When he was recording the loons, Mazerand thought their calls sounded very close to the opening notes of Debussy’s “Clair de Lune,” a piece he was working on at the time. Inspired by the theme of loons and moonlight (hence the title), Mazerand successfully set out to combine the Debussy piece with the first movement of Beethoven’s “Moonlight Sonata,” but discovered that this 12-minute medley wasn’t enough to fill a CD. Over time, he added six more classical masterpieces and one original piece, some presented as piano with strings and some as piano solos. I generally don’t like the addition of synth strings, but Mazerand did an exceptional job of keeping the sound natural and un-keyboard-like.

The CD opens with the title track. The haunting loon calls over shimmering strings set the mood for a fantasy piano concert on the lake, with hobbit string players ready to spring into action at any time, and the dark water reflecting the light of the moon as it slowly dances on the surface. Mazerand plays his classical selections straight, slowing some passages to keep them serene and relaxing, and adding strings when inspired to do so. I think this is an album that even purist classical listeners will enjoy. Debussy’s “First Arabesque” is a gently flowing piano solo. Mazerand included two of Mendelssohn’s “Songs Without Words,” “Sweet Remembrance” (arranged for piano and strings) and “Duet,” which remains a piano solo. I’ve always loved these pieces, so it’s a delight to hear them with a slight make-over. “Moon Glow” is the one original track, and it fits right in. Dark and dreamy, it creates a magical spell. “Song Without Words” is actually Schubert’s Impromptu Op. 90 #3, one of my very favorite pieces to play. The subtle strings in the background enhance the gentle, flowing beauty of this piece. Mazerand’s arrangement of Massenet’s “Thais Meditation” for piano and strings is stunning and could melt rocks. “Wow!” is about all I can say about this one! Mazerand also included Schubert’s “Impromptu Op. 142 #2,” keeping it a quiet, peaceful piano solo. The closing track is a reprise of “Moonlight Sonata,” in case you aren’t yet in a trance. What an incredibly beautiful album!

Clair de Loon is available from KeysToSerenity.com, and I recommend it very highly!
May 5, 2009
This review has been tagged as:
Kathy's Favorites: 2009
Serge's Website Serge's Artist Page on MainlyPiano
Album Links
Amazon (referral)iTunes
This site contains affiliate links to products. We may receive a commission for purchases made through these links.
More reviews of Serge Mazerand albums 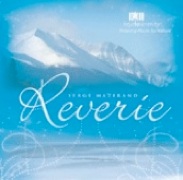 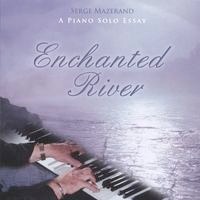 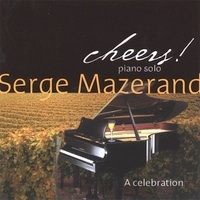