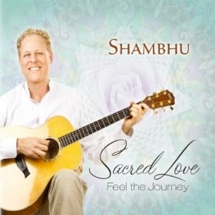 Shambhu's Website Shambhu's Artist Page on MainlyPiano
Album Links
Amazon (referral)iTunes
This site contains affiliate links to products. We may receive a commission for purchases made through these links.
Sacred Love
Shambhu
2010 / Acoustic Shine
57 minutes
Review by Michael Debbage
According to Shambhu’s website this guitarist has previously performed with Carlos Santana, Narada Michael Walden and Whitney Houston to name a few. But let’s skip the name dropping and talk about this very impressive solo debut that contrary to its album cover is not flowery and light but actually a very expressive recording that fuses organic contemporary instrumental music with light elements of jazz and world themes. Of course it does not hurt to have the Will Ackerman team, however this does not take away from the creative juices that flow from this new solo artist who co-produced and wrote eleven of the twelve impressive songs.

The album is anchored in the mature opening track “Together” that features a conservative Charlie Bisharat on violin with the legendary bassist Tony Levin gently driving this mid tempo song. Similar results can be found on “Natural Moment” this time with Shambhu’s shimmering sitar and guitar work giving the grounded composition a unique folksy yet exotic feel. Shambhu also adds the vocal chants of Claytoven Richardson on “Maui Breeze” and “Hide And Seek” cloaking the music with a bossa nova edge to it.

In contrast, Shambhu also captures a more tender approach best illustrated by the poignant “Eyes Of A Child”, the sublime “Revelation” and even the subdued restrained passion of “Imagine.” On the latter, Ackerman not only co-writes but also performs alongside Shambhu and veteran bassist Michael Manring who sounds like he is performing on a fretless bass, that only adds to the smooth silky sound. Shambhu takes an even more meditative approach on the likes of “Nirab Amare” and “Call To Spirit” and then seizes the opportunity to add a Western flavor on “Shiva Grove” by adding a jazz element courtesy of George Brooks’ saxophone as he intertwines with flutist Ravichandra Kulur. Simply brilliant!

Shambhu may have an unusual name and along with the meditative and very light artwork of the album cover, this may not be the smartest marketing decision as the meditative influence is nominal at best. However, this would certainly support the expression of don’t judge the “book” by its cover. Simply put, Sacred Love is an album of integrity and maturity that is very capable of exploring several genres yet still creating a very cohesive and entertaining album making it the sleeper hit of 2010.
April 3, 2011
This review has been tagged as:
Debut AlbumsGuitar musicMichael's Favorites: 2010
Shambhu's Website Shambhu's Artist Page on MainlyPiano
Album Links
Amazon (referral)iTunes
This site contains affiliate links to products. We may receive a commission for purchases made through these links.
More reviews of Shambhu albums 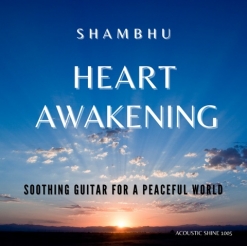 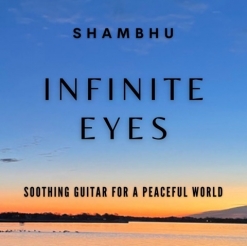