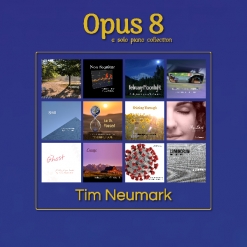 Tim's Website Tim's Artist Page on MainlyPiano
Album Links
Songbook ReviewAmazon (referral)Apple/iTunesSpotify
This site contains affiliate links to products. We may receive a commission for purchases made through these links.
Opus 8
Tim Neumark
2022 / Tim Neumark
55 minutes
Review by Kathy Parsons
Tim Neumark's Opus 8 is a collection of ten piano solos and one orchestrated piece that were released as singles over the past several years, plus two new piano solos composed specifically for this album. The orchestrated piece is Tim's arrangement of "Hope," one of Michele McLaughlin's piano solos from her 2020 Sketches album. Quite a bit of the music is on the melancholy side, reflective of the emotional impact of the Covid pandemic of the past couple of years. Some of the other pieces were inspired by Tim's love for his family. I've been reviewing Tim Neumark's music since his 2007 debut, Biography, and think this could easily be his best album yet.

I think Tim's explanation about the origins of the music is well worth sharing: "After the release of Moments in October 2015, I was musically and emotionally exhausted. Coming at the end of a 37-month stretch where I released five albums, I had nothing left to write. My first new music after 2015 was a classical music arrangement single released in 2017. It wasn't until 2018 that I released an original composition. That track, 'Yearning,' was my expression of wishing that I could get back to writing more original music." Since then, Tim has released about 25 singles in a variety of formats and styles, so, happily, his muse has obviously returned!

Opus 8 begins with "Lockdown," one of the two pieces not released as a single. Tim came up with the title first and then wrote this sad, ominous music expressing his feelings about the pandemic. Tragedy and loss run through the piece before it trails off at the end. "February Moonlight" expresses the stillness and sometimes eerie beauty of looking out at moonlight on the snow - one of my favorites. I love "Bows In the Mirror," a happily whimsical waltz inspired by seeing the bows in the hair of Tim's two young daughters in his rear-view mirror as he drives. "Non Sequitur" is the second piece composed for this album and "was named for its lack of inspiration: it has no connection to anything. Even its cover image is just a random image I found in my photo library." Nevertheless, the piece is beautiful with an elegant, poignant sweep I find very meaningful. "Shining Through" is a lively, upbeat burst of musical joy illustrated with a charming photo of Tim's daughters in a field of sunflowers with the sun glowing behind them. "My Love" is a tender, heartfelt piece composed for Tim's wife. "Conundrum" is the last piece composed for Opus 8 and was built around the idea of a difficult problem with no easy resolution. I really like this one, too! "Earth, Paused" was composed during the period when much of the world was shut down due to the pandemic and is based on four repeating melodic notes. Very open and atmospheric, it really feels like the slow passage of time - the world on hold. Michele McLaughlin's gently optimistic "Hope" closes the album with Tim's orchestrated arrangement performed by the Budapest Scoring Orchestra.

Opus 8 is available from Tim's site, Amazon, Apple/iTunes and streaming sites such as Spotify. Fellow pianists will be happy to know that there is a companion solo piano songbook that contains all twelve of the piano solos (but not "Hope," which is included in Michele's 2020 Sketches songbook in its original solo piano form). The Opus 8 songbook is also reviewed here on MainlyPiano.com.
February 10, 2022
Contributing artists:
Michele McLaughlin
Tim's Website Tim's Artist Page on MainlyPiano
Album Links
Songbook ReviewAmazon (referral)Apple/iTunesSpotify
This site contains affiliate links to products. We may receive a commission for purchases made through these links.
More reviews of Tim Neumark albums 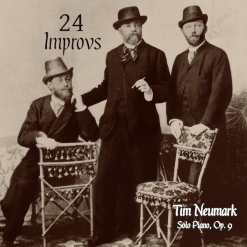 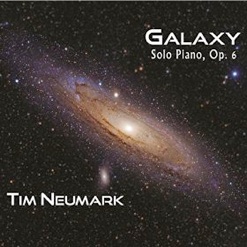