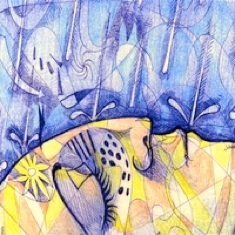 Tobin's Website Tobin's Artist Page on MainlyPiano
Album Links
Amazon (referral)iTunes
This site contains affiliate links to products. We may receive a commission for purchases made through these links.
Rain Bather
Tobin Mueller
2009 / Tobin Mueller
78 minutes
Review by Kathy Parsons
Rain Bather is a fascinating new album from Tobin Mueller, an artist who defies categorization. Under the a broad umbrella of jazz, Tobin’s original music ranges from big band to funk to acid to sensuous ballads. Eight of the thirteen pieces had their origins in Mueller’s Broadway show, “Creature,” which is based on the Frankenstein story. In this new incarnation, the music has taken on a life of its own (so to speak!). The CD features Mueller on B3 organ, electric piano, and synth. His nephew, Chris Mueller, the pianist for the 1990’s run of Creature, did much of the arranging and appears on acoustic piano. The musicians on the CD are given plenty of room to solo and improvise, bringing their unique voices to the music. Years in the making, some of the tracks were passed around the internet with players adding their parts; other tracks were recorded in studios. It is not readily apparent which tracks were done in which way - kind of amazing if you think about it! Although downloading music has become part of contemporary life, the packaging of Rain Bather makes a strong case for physical CDs. The cover artwork by Alan Perry is a wonderful invitation with its colors, fusion of shapes and forms, and mix of repose and energy. The CD itself is designed to look like a 45 RPM “single,” with vinyl and “grooves” - a wonderful idea fully realized!

Rain Bather opens with “I Wanna Fly,” a high-energy big band-style piece with saxes, brass, organ, piano, and percussion. No, kids, you’re not going to be able to doze off to this one! “Cliff’s Edge” has the same instrumentation, but is more of a funky groove - I like this one a lot! “Must Go Back” steps up the tempo and let’s ‘er rip on organ, piano, bass, and percussion. “Windowshade” is another favorite with Tobin performing most of the instruments in layers - upbeat and funky with a playful sense of fun. “Secret of Life” slows it down to a cool jazz mode with a little acid thrown in for good measure - also a favorite. “Waltzing Night Into Day” is a slow, graceful dance that provides a quiet and reflective interlude. “River Runs Through Me” is another lovely tune on the mellow side and has especially nice solos on piano and sax. “Last Song On Vaudeville” is a big band meets progressive jazz fusion. As the piece nears its final moments, Bill Barner’s clarinet trails off to the sound of a 78 phonograph record scratching its way to the end, underscoring the CD design.

Rain Bather is yet another demonstration of Tobin Mueller’s multi-faceted artistry. For a vibrant musical experience overflowing with life and attitude, check it out! Rain Bather is currently available from CD Baby and tobinmueller.com, and will be widely available in February 2009.
January 19, 2009
Tobin's Website Tobin's Artist Page on MainlyPiano
Album Links
Amazon (referral)iTunes
This site contains affiliate links to products. We may receive a commission for purchases made through these links.
More reviews of Tobin Mueller albums 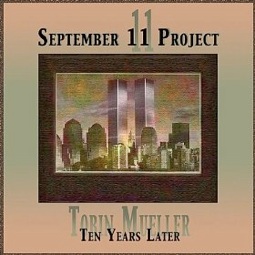 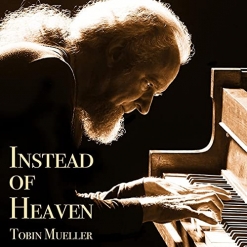 Instead of Heaven
2021
Latest Reviews