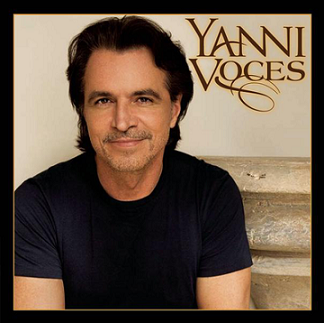 Yanni's Website Yanni's Artist Page on MainlyPiano
Album Links
Amazon (referral)iTunes
This site contains affiliate links to products. We may receive a commission for purchases made through these links.
Voces
Yanni
2009 / Disney Pearl
66 minutes
Review by Kathy Parsons
Voces is the Spanish-language companion CD to the simultaneously-released Voices, the first studio recordings from Yanni in six years. A collaborative effort by Yanni and award-winning producer Ric Wake, only a few of the songs appear on both albums. Voces features ten Latin American vocalists (including Nathan Pacheco, Ender Thomas, and Chloe, who appear on both recordings). Some of the singers wrote their own lyrics to Yanni’s music and others were penned by Karla Aponte. I understand very little Spanish, but the passion in the voices speaks volumes and no translation is needed. Both albums capture the electric charisma of Yanni’s live performances and both fairly explode with the joy of making music. I tend to be very partial to instrumental recordings, but I love both of these albums. Voces also contains a one-hour DVD that features samples of most of the music on the CD plus several performances from a concert in Acapulco. On the DVD, Yanni and Ric Wake speak English, but most of the singers speak Spanish. Like the songs themselves, translation really isn’t necessary and it’s fascinating to see the singers perform and interact with Yanni.

All seventeen tracks are enchanting in their own way, but here are some highlights. Voces begins with “Ritual De Amor (Desire)” performed by Ender Thomas. This song is on both CDs, but what a powerhouse! I love it! Next up is “Llama De Amor,” a smoldering ballad by Olga Tanon. I don’t know what she’s singing about but she draws on passion that goes all the way down to her toes! “Y Te Vas” is an incredible vocal version of Yanni’s classic “Keys To Imagination,” sung by Andy Vargas. Cristian Castro sings “Ni La Fuerza Del Destino,” based on “Face in the Photograph,” a gentle, beautiful melody and a voice that is perfect for it. “The Rain Must Fall” has been one of my favorite Yanni pieces for a lot of years, and Jose Feliciano makes it his own as “No Ha Dejado De Llover” - a delightful surprise and a great arrangement! Chloe and Ender Thomas are smokin’ in “Quedate Conmigo” with voices full of emotion without going over the top. Lucero’s voice is like plush velvet, and her take on “Eterno Es Este Amor” is gorgeous. “Volver” is a fun-filled take on “Someday,” performed by Willy Chirino, trumpeter Arturo Sandoval, and Ender Thomas - sun-soaked energy! “Yanni & Arturo” is a charming duet for piano and muted trumpet. Chloe also has an amazing voice and seems to be able to sing just about any kind of song - especially power ballads. She reins it in a bit on “Que Te Vaya Bien,” and lets the expressive beauty of her voice carry the song. Jose Jose closes with “Volver A Creer,” based on “Reflections of Passion.” Once considered to be the greatest Latin American singer of all time, pneumonia and alcoholism seriously damaged Jose’s voice, so his return to the stage to sing this song was especially poignant.

In the years since Yanni’s last album, many people were wondering if he was going to record again. Both Voces and Voices clearly indicate that Yanni is still at the top of his game. If you are concerned about buying both albums, don’t worry about it. The duplicated songs (I think there are five) are among the strongest tracks on both CDs, and it’s really a pleasure to hear them repeatedly. The DVDs are also completely different from each other, so buying both packages won’t be a waste. These CDs and downloads are available just about everywhere! Highly recommended!

June 17, 2009
This review has been tagged as:
Kathy's Favorites: 2009Kathy's Top 40 for the Decade (2000-2009)
Yanni's Website Yanni's Artist Page on MainlyPiano
Album Links
Amazon (referral)iTunes
This site contains affiliate links to products. We may receive a commission for purchases made through these links.
More reviews of Yanni albums