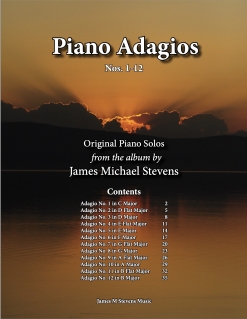 James' Website James' Artist Page on MainlyPiano
Songbook Links
Sheet Music Plus
This site contains affiliate links to products. We may receive a commission for purchases made through these links.
Piano Adagios, Nos. 1-12
James Michael Stevens
2021 / James M Stevens Music
37 pages / 12 songs
Review by Kathy Parsons
Piano Adagios, Nos. 1-12 is the companion sheet music book for James Michael Stevens' 2021 solo piano album by the same name. The twelve pieces were composed over a two-week period in the spring of 2021 and appear in the songbook in the order they were finished. Each piece is in a different major key and each is three pages long. "Adagio" is the musical term for a slow tempo, so all of the pieces are played in a relaxed, expressive way. One of the most prolific composers on the planet, Dr. James Michael Stevens is the Chairman of the Music Department at Welch College in Tennessee and has a staggering 5818 items for sale on SheetMusicPlus.com. A music educator himself, Stevens' music is very suitable for teaching material - especially for teens and adult students - as well as for playing for pleasure.

None of the music in Piano Adagios, Nos. 1-12 is complicated rhythmically or difficult to reach, so most pianists at an upper intermediate playing level should be able to play this music fairly easily. Playing with expression and emotion makes up for the relative simplicity of the music and also makes playing the music even more enjoyable. I find it interesting that Dr. Stevens writes out his compositions first and then records the music using his own sheet music. The notation in the songbook is roomy, clear and very easy to read. Metronome settings, phrasing, expression, and dynamics are all included with each piece.

Piano Adagios, Nos. 1-12 is a really nice collection of piano solos and is available as a PDF download from SheetMusicPlus.com. Recommended!!!

The title of each piece and the key(s) they are in are as follows. Each piece is three pages:

September 8, 2021
James' Website James' Artist Page on MainlyPiano
Songbook Links
Sheet Music Plus
This site contains affiliate links to products. We may receive a commission for purchases made through these links.
More reviews of James Michael Stevens songbooks 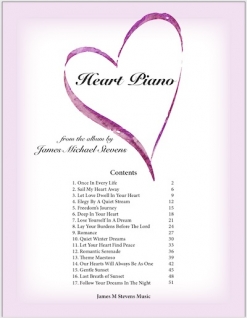 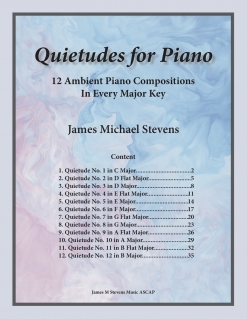 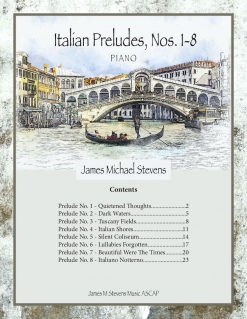